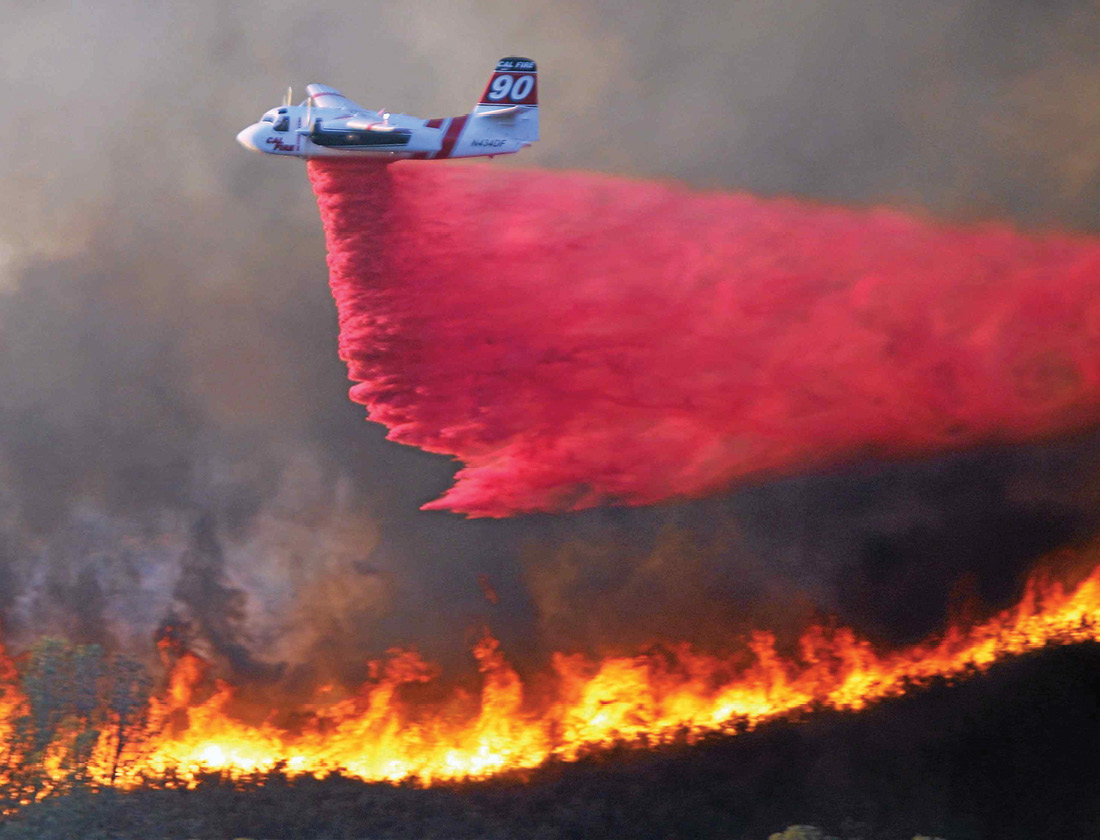 A wide variety of aircraft are in use helping ground crews fight wildland fires, from fixed-wing aircraft to customized helicopters carrying water/retardant tanks to choppers hauling buckets on cables and even drones that can drop off equipment to ground crews.

The array of aircraft that can be found at wildland incidents and how they are used depend on the location and availability of the air assets as well as the weather and fire conditions at the fire location.

Brown points out that all of CAL FIRE’s aircraft are excess U.S. military aircraft that have been acquired through the Federal Excess Personal Property Program. “The aircraft are registered to the U.S. Department of Agriculture, and CAL FIRE is the operator of the aircraft, but the federal government owns them,” he says. “Over the years, we have acquired 26 Grumman S2-T frames, brought them to our maintenance facility, and completely gone through the aircraft from top to bottom, upgrading them electrically and hydraulically, because they have been in desert storage for between 10 and 15 years.”

The Grumman S2-T air tanker can carry 1,200 gallons of water or retardant, Brown notes, while the Lockheed C-130-H air tankers can carry 4,000 gallons. Brown says that CAL FIRE got the C-130-H aircraft through the efforts of the late U.S. Senator John McCain under the National Defense Authorization Act. “They were transferred through a program from the U.S. Coast Guard to the U.S. Forest Service before we took over the program, and we will own them in about a year and a half,” Brown says.

CAL FIRE’s Sikorsky S70i is a twin-engine helicopter that carries a 1,000-gallon tank, while four of the UH-1H Bell helicopters have 320-gallon tanks, with the remaining eight Hueys outfitted with a tethered 320-gallon bucket. Brown says the Rockwell OV-10 Broncos are operated as CAL FIRE’s air tactical platforms. “They seat two, a pilot and an air attack officer, and are used for command and control, setting priorities, directing tankers into their drops, giving clearances and assignments, and making projections on fire spread,” Brown observes. “The two KingAir A200 are two-seat aircraft that are used to tactically train air attack officers.”

2 This CAL FIRE UH-1H Bell helicopter is dropping water out of its 320-gallon tank.

Brittany Wise, vice president and general manager of Erickson Inc., says Erickson is an OEM that makes and operates the S-64 helicopter, called the AIR CRANE®. “The S-64 has a 2,650-gallon tank that combines the capacity of a fixed wing air tanker with the accuracy and refill speed of a helicopter,” Wise says. With its ram scoop hydrofoil attachment, the S-64 can get refills from fresh water or salt water sources in as little as 30 seconds, and its original Hover Snorkel design refills within 45 seconds from fresh water sources as shallow as 18 inches, she notes.

Wise points out that the S-64 recently underwent three major innovations. “We gave the helitanker a set of composite main rotor blades for increased performance, reengined the aircraft to make the engine more efficient, and integrated the controls with matrix technology that allows pilots to have a safer mission yet drop the water in the right place according to the wildland commander’s specific instructions,” she says. Wise adds that wildland fire incident commanders have used the S-64 in both initial attack and extended attack roles because of its ability to make a lot of drops in quick turnaround times.

Terry Miyauchi, customer solutions parapublic manager for Bell, a subsidiary of Textron Inc., says Bell has a number of legacy aircraft in service for wildland firefighting around the world. “Worldwide, there are over 1,200 Bell 205 and Bell 212 series aircraft that remain operationally active, with nearly 30 percent of those in dedicated fire service,” Miyauchi says. The Bell 205 is a civilian version of Bell’s UH-1 Iroquois single-engine military helicopter, while the Bell 212 is a civilian version of the Bell UH-1N Twin Huey twin-engine helicopter.

Other Bell helicopters used in wildland firefighting, Miyauchi notes, are the Bell-Subaru 412EPX, which has a cargo hook capacity of 5,000 pounds and can deliver water on a fire by either bucket or belly tank; the Bell 505, which can deliver more than 100 gallons of water in high-density altitude environments and often is used in initial attack suppression; the Bell 429 helicopter, with its search and rescue abilities and capability of water delivery and personnel transport; and the Bell 407 GXi helicopter, which is used in initial attack firefighting, reconnaissance, firefighter rescue, and sustained water drop operations.

Miyauchi says Bell anticipates certification soon for the Bell 525 helicopter that has a triple-redundant fly-by-wire flight control system and “an ARC Horizon Flight Deck that will provide unparalleled situational awareness and safety. The Bell 525 can handle up to 20 passengers and water drops in the super-medium Type 1 category,” he adds. Also, Bell is currently flight testing its unmanned Autonomous Pod Transport, the Bell APT-70 with vertical takeoff and landing ability that transitions to wing-borne flight, which has beyond line of sight capability and a payload of 70 pounds.

Roger Wassmuth, senior director of business development for air vehicles at Kaman Aerospace, says Kaman makes the K-MAX® Heavy Lift Helicopter, “which is designed to perform repetitive external lifting; can lift more than its weight of 6,000 pounds; and burns only 82 gallons of fuel an hour during lift operations, making it the most efficient lift-to-fuel ratio of any helicopter in its class.”

The K-MAX is well-adapted to wildland firefighting, Wassmuth maintains, because “the pilot has the best visibility looking out and down since the cockpit and airframe are designed for visual reference. The K-MAX uses a 700-gallon Bambi bucket on a long line that’s on a trolley that moves back and forth, allowing the pilot to precisely place the water where the firefighters want it.” Kaman also makes the K-MAX Unmanned Aircraft System (UAS), Wassmuth notes, “that can fight fires, deliver supplies, or perform reconnaissance.”

Mike Lynn, director of Aero-Flite Inc., says that Aero-Flite has a fleet of fixed-wing aircraft that is under contract with the U.S. Forest Service for wildland air operations. “Besides our contract with the USFS, we have on-call contracts with California, Washington state, Oregon, and other western states,” Lynn says, “and in the past have had contracts with the Bureau of Land Management for operations in Alaska.”

Aero-Flite’s air tanker fleet includes four Viking CL-415 twin-engine turboprop aircraft that have a payload of 1,621 gallons of water and 90 gallons of foam and seven AVRO RJ85 AT twin-engine aircraft with a 3,000-gallon tank capacity. “We will fly anywhere from Florida to Alaska and from California to Maine, depending on where the fires are,” Lynn observes. “Depending on the time of year, our tankers might be operating first in Tennessee and then moving west to Texas or start out in New Jersey and then move into Kentucky, Minnesota, or Wisconsin. Usually by the end of May, the trees green up and the vegetation has a lot of moisture, which is when the West dries out, and we move into Arizona, New Mexico, Nevada, and the western coastal states.”