Variety of Foam Systems Being Used on Wildland Engines

Many fire departments are opting to have foam systems built into their wildland engines, especially those that operate in wildland urban interface areas.

Depending on the area of the country and the needs of the fire department, the types of foam systems being installed on wildland pumpers run the gamut from direct-injection systems of various capabilities to simple around-the-pump foam systems.

Todd Nix, apparatus consultant for Unruh Fire, points out that most fire departments want foam systems installed on their Type 6 wildland engines. “Between 90 and 95 percent of the departments want foam because firefighters realize the capabilities of foam and want the ability to use it when needed,” Nix says. “On the Type 6 wildland pumpers that we have been building, many departments choose to have a FoamPro 1601 foam system onboard to go along with a midship pump. If they are using a smaller portable skid pump, then we’ll usually use the all brass Darley around-the-pump Foam Flurry.”

Jason Kline, Colorado and Wyoming sales manager for SVI Trucks, agrees that most Type 6 wildland engines being built carry foam systems on them. “Almost every wildland truck we build has a foam system on it,” Kline says. “Type 3 and Type 6 wildland engines that have midship pumps often have a FoamPro 1601 foam system onboard, with a Type 3 typically having a 15-gallon foam tank and a Type 6 a 10-gallon foam cell. We also have installed Waterous Aquis™ foam systems on Type 6 engines as well as Mercedes Textiles’ Blizzard Wizard around-the-pump foam proportioners.” 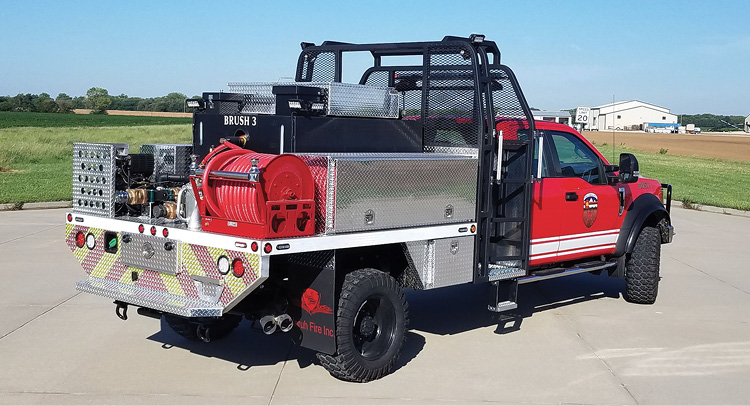 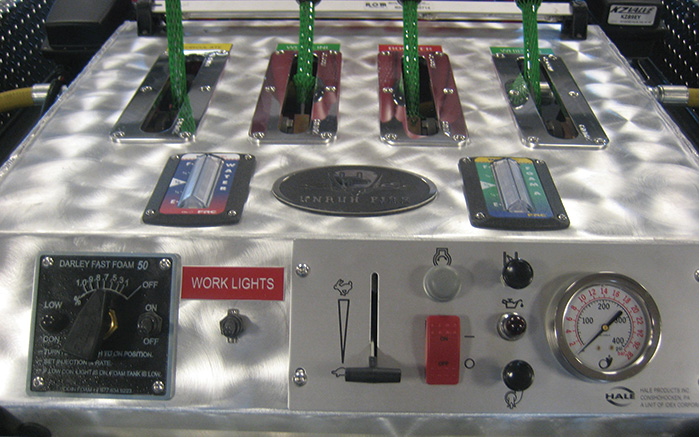 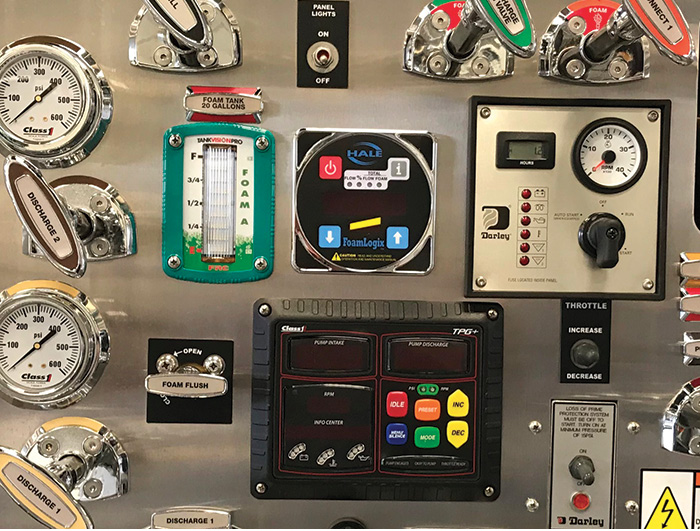 3  This Hale Products FoamLogix direct-injection foam proportioning system was installed on a Type 6 engine by REV Group. (Photos 3 and 4 courtesy of REV Group.) 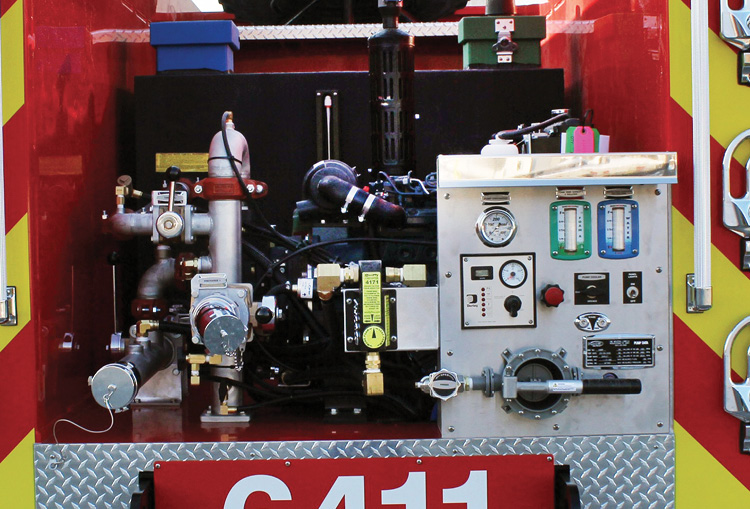 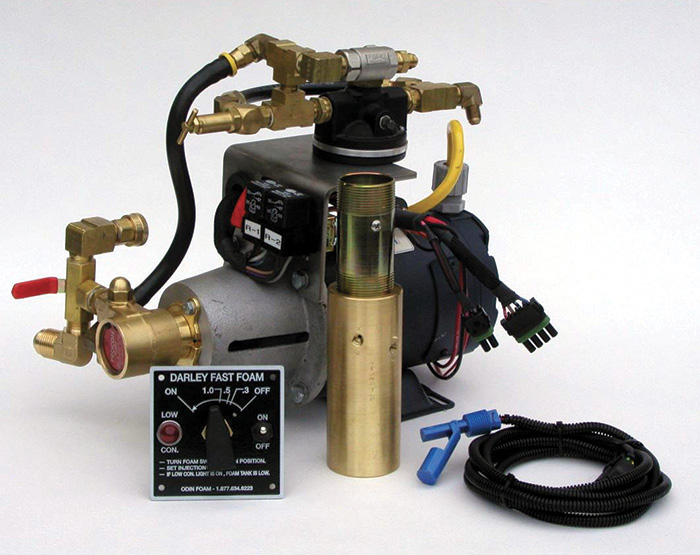 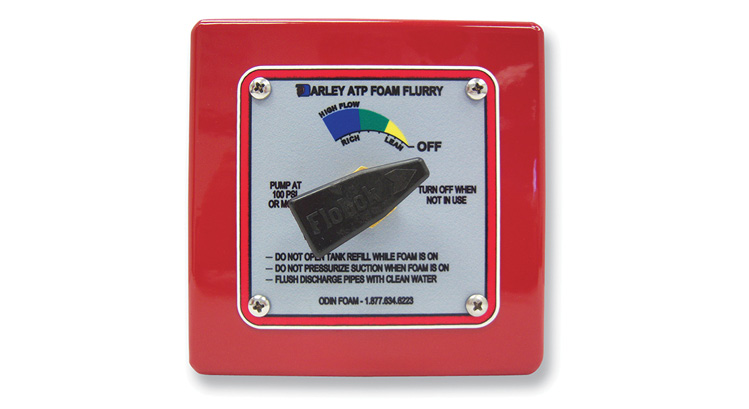 Larry Segreto, vice president of Boise Mobile Equipment (BME), says his company had built a lot of wildland vehicles for the U.S. Bureau of Land Management, CAL FIRE, and the California Governor’s Office of Emergency Services (OES). “Their Type 3 wildland trucks usually have an electronic foam system like the FoamPro 1601 or the Aquis 1.5 or 2.5 foam proportioning systems and likely are carrying a 25-gallon foam tank,” Segreto points out. “The Type 6 wildland engines often will carry a smaller around-the-pump proportioner like the Scotty Firefighter system.”

Michael Dupay, division vice president of marketing for Safe Fleet, notes that FoamPro has several models of foam proportioning systems that are in wide use on wildland engines. “The most popular models are the FoamPro 1600 series and the FoamPro 2001,” Dupay says. “The FoamPro 1600 models range in capacity from 1 gallon per minute (gpm) to 1.7 gpm of foam concentrate, and the units come with a simple control head. The FoamPro 2001 series has a capacity of up to 5 gpm, although the one in most popular use is the 2.6-gpm model. All versions of the 2001 series have a digital control head.”

Troy Carothers, AutoCAFS manager for Darley, says Fast Foam is Darley’s direct-injection foam system. “The Fast Foam 50 system treats from 0.1 to 1 percent foam concentrate and flows up to 50 gpm,” Carothers says. “It’s great for one or two handlines on a wildland pumper. At our Odin Division, we developed a remote mounted panel that can be used to choose percentages and switch on and off the Foam Flurry around-the-pump proportioner we offer.”

Doug Feldman, western region sales manager for Rosenbauer, says his company usually installs FoamPro 1601 systems on wildland Type 6 pumpers. “That system is a good fit on a Type 6,” Feldman says. “In fact, California OES has put that system on its Type 6 wildland engines.”

Joe Messmer, president of Summit Fire Apparatus, notes that Summit has installed FoamPro 1601, Hale SmartFOAM, and Waterous Aquis foam proportioning systems on wildland engines it has built. “We also have installed Robwen foam systems that are fully self-contained, positive-pressure foam-concentrate-to-water systems,” Messmer notes. “Robwen systems don’t require an outside electrical source because they get their operational power from the pressure generated by the flow of water from the pump. The systems are variable flow and variable pressure and will proportion foam from 0.1 to three percent.”

Jeremy Fox, product manager of foam and CAFS for Hale Products, says a number of wildland pumpers carry Hale’s FoamLogix 2.1 and 2.3 foam systems as well as its SmartFOAM 2.1 and 2.3 systems. “These are our direct-injection systems using positive displacement pumps, which allow for consistent performance,” Fox says.

Perry Shatley, wildland sales manager for BFX Fire Apparatus, says that the U.S. Forest Service currently is using Darley Fast Foam 150 proportioning units on some of its Type 6 wildland engines. “We also use FoamPro 1601, FRC Turbo Foam, and Waterous Fire Toll systems on wildland engines,” Shatley says. “We like to use direct-injection discharge-side foam proportioners instead of around-the-pump units because they have a check valve so you don’t have to worry about getting foam in your water tank.” 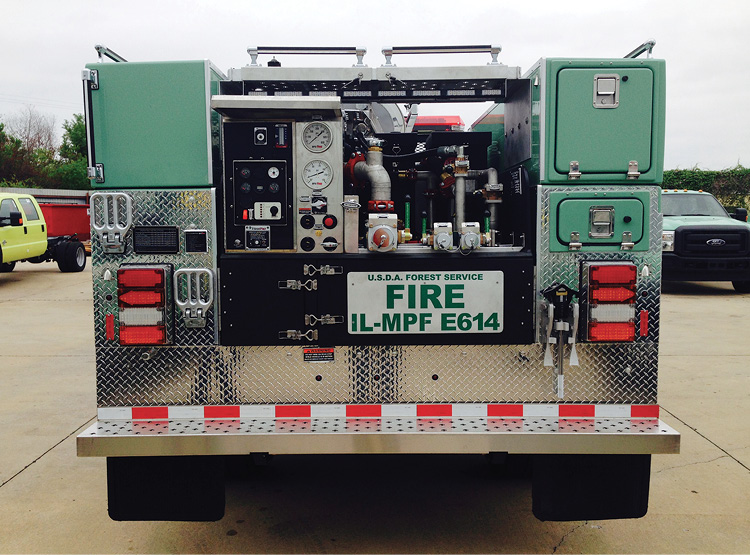 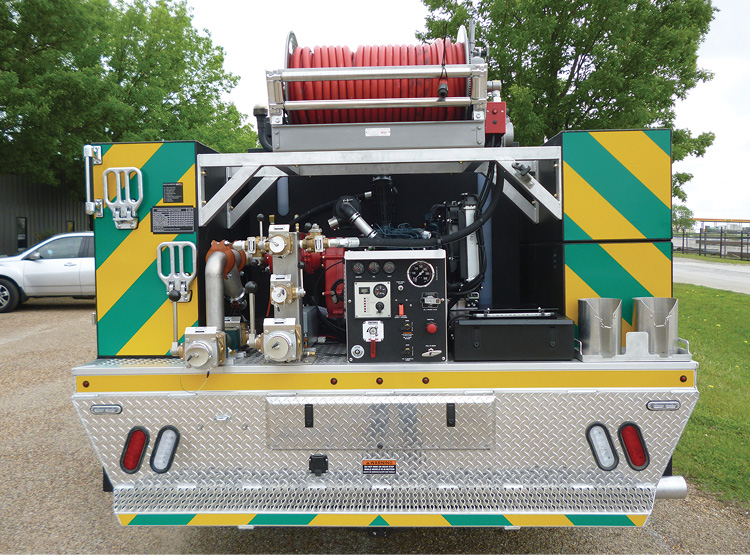 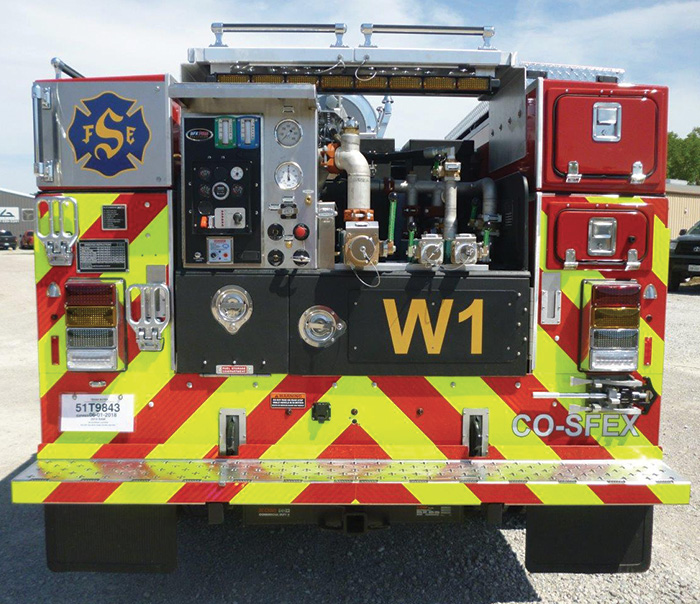 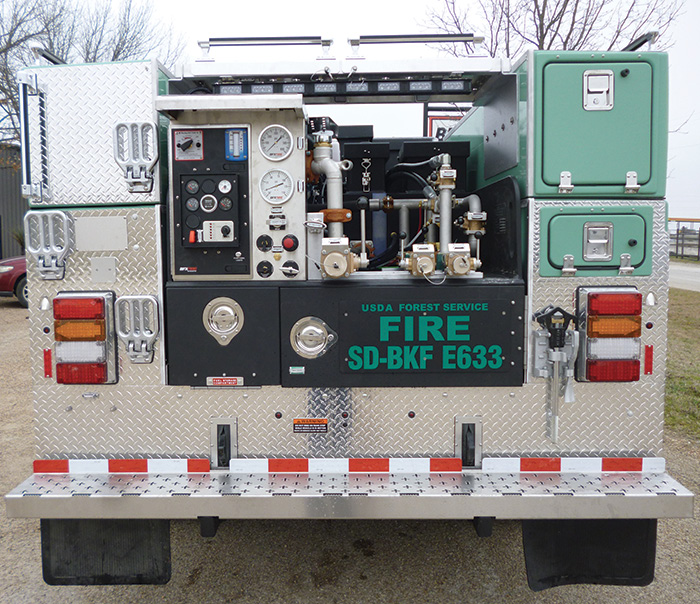 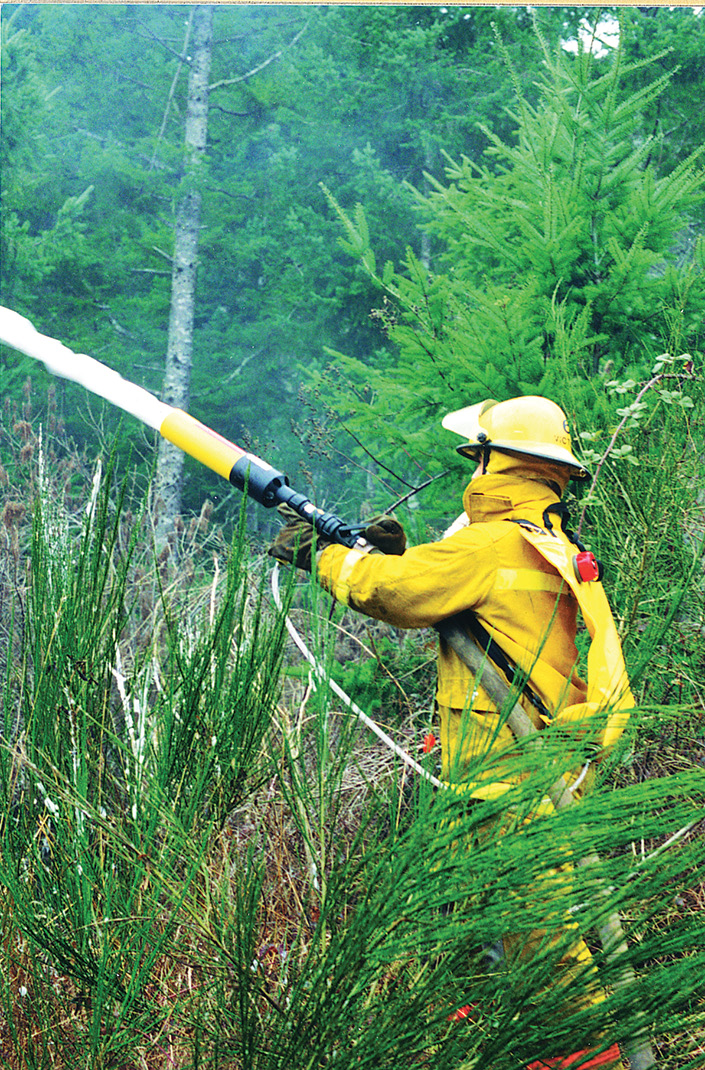 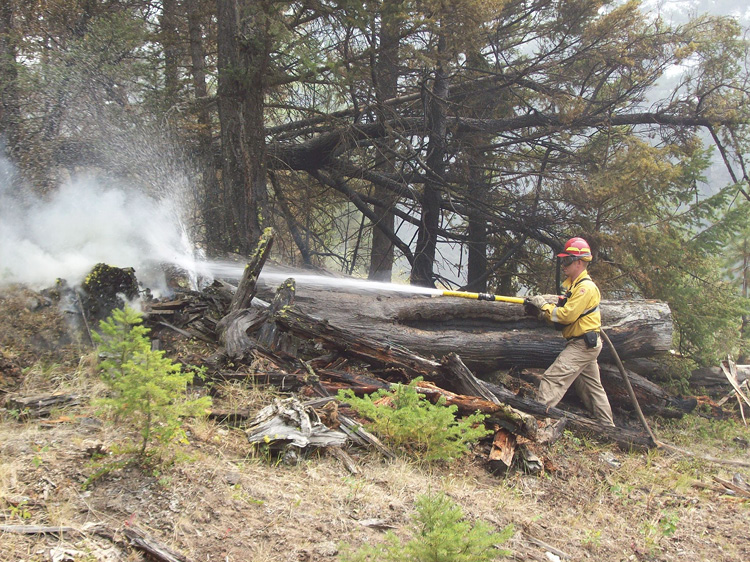 12 This wildland firefighter is using a Scotty Firefighter Foam-Fast™ system. 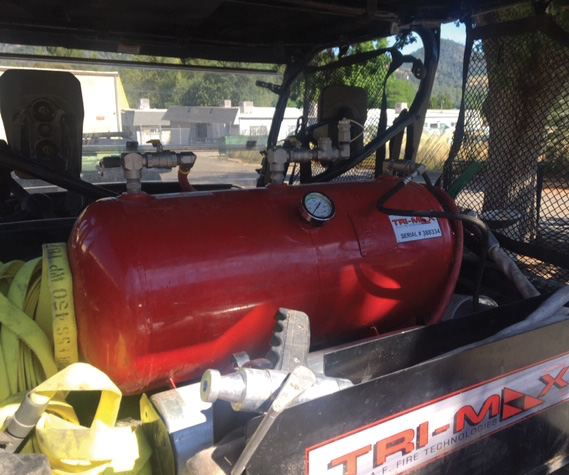 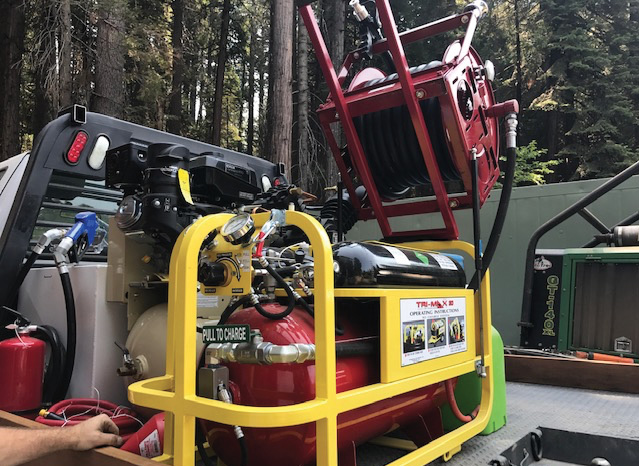 14 Kingsway Industries’ TriMax 30 can be installed on a flatbed wildland pumper.

Bret Cerini, wildland product manager for REV Group, notes that around-the-pump foam systems typically aren’t found on Type 3 wildland engines but rather on Type 5 and Type 6 pumpers. “The most popular around-the-pump foam system we see installed is the Scotty Firefighter system,” he says. “And while you can get into multiple discharges with an around-the-pump system, you have to be realistic about what your flow rate is. If you want to flow more than 150 gpm, then it might not be the system for you to use, but if you want 120 gpm or less, it’s probably a good choice.”

Lloyd Rees, division manager for Scotty Firefighter, says Scotty’s Through-the-Pump foam eductor and mixer can educt concentrates at percentages of 0.1 to 3.75 percent at flow rates from 15 gpm to 125 gpm at 100 pounds per square inch.

Jeff Cook, owner of 1st Attack Engineering, says his company usually installs a Scotty around-the-pump foam system on the wildland pumpers it builds. “In the Midwest, we don’t need a more intricate system,” Cook says. “We’re not fighting fires like they see in the West. Usually we can get in and out in a day without much trouble.”

Dave Mahrt Sr., president of Kingsway Industries Inc., says his company’s TriMax 30 and TriMax 3 foam systems have been used on wildland pumpers, utility terrain vehicles, and even helicopters. “Some heavy helicopters carry TriMax 3 during wildland operations,” Mahrt observes, “and we also have TriMax 30 units at a number of helitac locations.”

Dan Richardson, Safe Fleet’s foam application specialist, points out that the size of a foam proportioning system to be used on a wildland pumper depends on the number of discharges that will need to flow foam and the gallonage of the water to be flowed. “We want to know the minimum and maximum flows needed,” he says. “On a wildland pumper where you want to treat a couple of discharges, the FoamPro 1601 is a great fit. When you have to get foam to more discharges, like on a Type 3 engine, the FoamPro 2001 is the better choice.”

Cerini agrees with Richardson on the importance of determining how to size a foam proportioning system. “It’s important to have a list of what discharges are to be water only and which ones are to be foam capable so you can size the system properly,” Cerini says. “Direct-injection systems like the FoamPro 1601, which are computerized and can handle multiple discharges simultaneously, are the most popular on wildland engines. If a department needs larger flows, it can jump up to a FoamPro 2001 system, which has a larger pump. These systems can flow from low gpm rates to initial attack flow rates.” He adds that Waterous, Hale Products, and W.S. Darley & Co. also have direct-injection foam systems that REV installs on wildland engines, including Hale’s FoamLogix, Waterous Aquis, and Darley’s Fast Foam units.