Hypothetically speaking: It’s a stormy summer night when commercial passenger Flight OU812 comes in for a landing. As it touches down, a rogue gust of crosswind pushes it off the port edge of the runway. In the blink of an eye, this aircraft slides through the grass and through the airport security fence into the adjacent lagoon.

The plane comes to rest on the reef in three to six feet of water approximately two hundred yards from shore. You are part of the small complement of airport rescue and firefighting (ARFF) crew on duty at the airport. Now what? Is this an ARFF call? Is this a fire department call?

In this case, the answer to the questions above is yes, this is an ARFF call. Unfortunately, the small municipal fire department here is woefully understaffed, undertrained, and underpaid ($8.00 per hour). 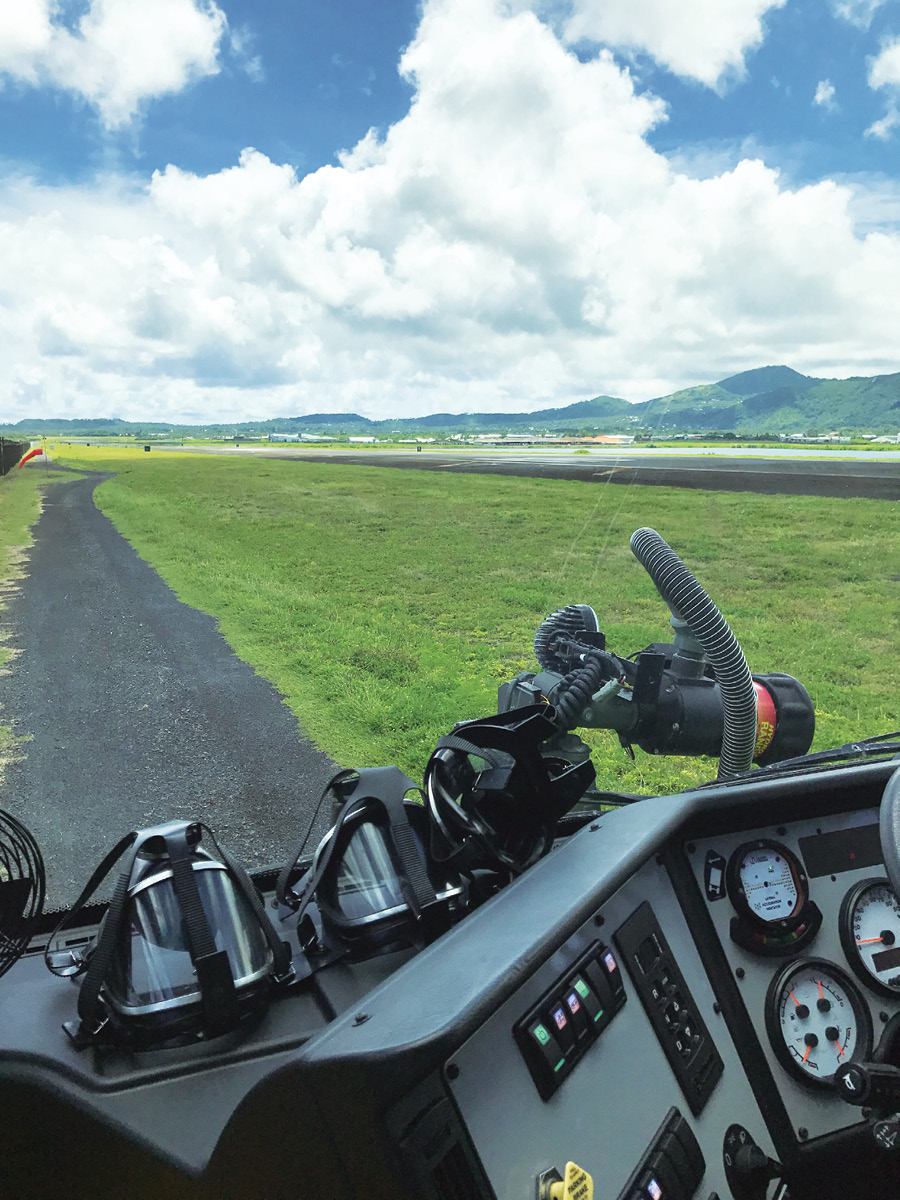 1 The runways are parallel to each other and are separated by a saltwater “pond” (small lake) that lies between them. These runways are peninsular (surrounded by water on three sides) in nature. There are shallow lagoons on either side of the peninsula, and the water side end of the runways is a natural shelf that drops off to 600 feet deep. (Photo by author.)

This is one of the exact scenarios I was presented with last fall when I was asked to do some emergency preparedness and response consulting and technical rescue training for an international airport ARFF crew in the South Pacific Islands. This article is not meant to be about me in any way. However, I realized that the challenges that this single scenario presents can easily be modified and applied to many airports here on the mainland of the United States. One very unique difference, however, is that this Pacific Island ARFF crew has VERY few outside resources to depend on coming to help. Those who can help are very likely eight to 12 hours away. As we all know, that kind of time frame often turns what started as rescue operations into recovery operations.

To narrow the scope of this piece a little, let’s look at some of the equipment and apparatus needs that would go into readiness for such a scenario. I will use the actual needs assessment data from the island while trying to keep this piece interesting. Trust me, this is a VERY interesting and challenging project to be working on as the project continues at the time of this writing.

This airport has two major commercial-airliner-length runways. The runways are parallel to each other and are separated by a saltwater “pond” (small lake) that lies between them. These runways are peninsular (surrounded by water on three sides) in nature. There are shallow lagoons on either side of the peninsula, and the water side end of the runways is a natural shelf that drops off to 600 feet deep. There are large double gates with very short crude concrete ramps into the lagoons on either side. Tide changes result in lagoon water levels being an average of three feet to 12 feet, depending on high or low tide. All of the good and bad things about a tropical coral reef structure are here in living color, including reef sharks, moray eels, lionfish, and other creatures that can ruin a rescuer’s day … or night.

The ARFF department was originally looking at large personal watercraft (PWC)—boatercycle style—for its choice of rescue vessel because of their compact size and maneuverability in shallow water. Although these are great vessels for many coastal water and swiftwater rescue applications, they are limited to carrying one to two rescuers at most, and there is no place for a “less than ambulatory” victim or body.

We found that several manufacturers make shallow draft, rigid hull, working rescue deck boats that can be outfitted with outboard jet motors for use in shallow water. These vessels allow for an operator and two to three rescuers with room for patient litters. They are also outfitted with LED deck lights as well as scene lighting and storage for rescue equipment. Some models can be outfitted with small onboard saltwater firefighting units.

We collectively looked at everything from the aforementioned boats and rescue model PWCs to rigid bottom inflatables of all shapes and sizes. One of the considerations that many of us don’t have to think about is the effect of weather and climate on the choice of craft. Subtropical humidity and saltwater wreak havoc on emergency apparatus, vessels, and rescue gear in that part of the world even when stored inside. As you might imagine, replacement parts for just about anything can take a month or longer to receive, as few things come to the island by plane (there are only two commercial flights a week from the United States), with most freight coming to the island by cargo ship. The ARFF company decided to purchase “Skeeter” type rigid hull shallow water boats with outboard jet motors.

In addition to purchasing these watercraft, the department needed to spec and purchase lots of rescue supplies and equipment. Because of the stated purpose and mission for the boats, it was a given that rescuers would also need to be outfitted with a complement of dry suits and other water rescue personal protective equipment, as a down aircraft into one of the lagoons would more than likely create a contaminated water rescue/recovery environment. Oil, aircraft fuel (jet fuel or gasoline based on size and type of aircraft) contamination would have to be considered, in addition to the human biohazard and environmental (shark) hazards that would exist.

One of the questions that arose in the planning stage of this project came from the people on the island. The island has two seasons (tongue in cheek). The “hot” season sees temperatures in the mid 90s with the humidity percentage in the low 90s. The “cool” season has temperatures in the mid 80s with the same humidity levels. It was brought to our attention that putting local rescuers in drysuits would likely create a heat stress issue, which would limit the amount of time that personnel could operate on scene. In addition to the air temperature, the average water temperature in these lagoons is 85 degrees. This revelation also spurred the need for appropriate onsite rehab facilities that these firefighters would not have normally considered in this tropical paradise.

We all know that most regional and international airports have on-site ARFF crews that are well-trained, well-equipped, and well-versed in aircraft firefighting and related passenger rescue operations. Many coastal airports in the country also have mutual-aid relationships or agreements with other local agencies to help provide additional resources and personnel for rescue operations in the event of a water-related down aircraft event. This small island does not have these luxuries. These brave souls have been tasked with both the duties of an ARFF company as well as those duties of a heavy rescue company without being able to increase staffing numbers. In light of these circumstances, this ARFF company not only has to spend its dollars very wisely but also has to figure out the best and safest way to do two jobs—ARFF and water rescue—at the same time.

We will be returning to the island during the fall to conduct a number of training exercises that will start with basic lifesaving; move on to watercraft operator; and advance through various modules of coastal water rescue, incident command, and mass casualty incident management. I’ll keep you posted.