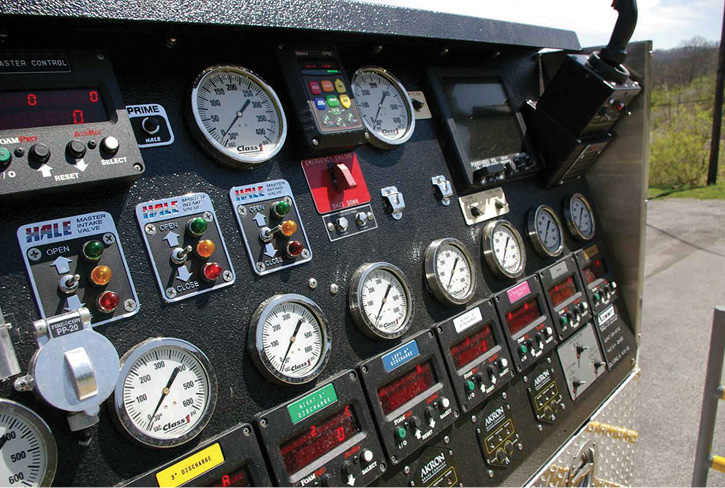 A lot of firefighters have heard the old saying, “When you’ve seen one fire truck, you’ve seen ONE fire truck,” meaning each rig has its own individual, unique features and rarely will be exactly the same as another pumper. And yet, pumpers still have more common elements with each other rather than fewer.

With that in mind, Fire Apparatus & Emergency Equipment asked apparatus manufacturers what they envision the pumper of the near future will look like and how it will perform.

Joe Messmer, president of Summit Fire Apparatus, says that with the civilian movement toward self-driving automobiles and even tractor trailers, at some point apparatus manufacturers likely will consider a self-driving fire truck. “But, I don’t think we’ll ever see one because in an emergency situation you have to maneuver a pumper in traffic, so I don’t see self-driving pumpers happening,” Messmer says. “However, when the pumper gets to the scene, I think you’ll see more remote control of the vehicle. Think about how concrete pumping trucks are all done by remote control with the driver standing apart with a controller around his neck, moving where the concrete is pouring, speeding it up or slowing it down. I think pumpers will be controlled that way in the future, too, and one of the benefits will be overcoming a lack of manpower on the scene.”

2 Safety is an important element in pumpers of the future, as shown on this IPS-NXT pumper built by Spartan ER, which minimized the operator’s panel to maximize compartment width, giving firefighters the ability to keep equipment lower to the ground. (Photos 2 and 3 courtesy of Spartan ER.)

3 Spartan ER installed an OMNI pump control module on a St. Louis (MO) Fire Department pumper on both the driver and officer’s side of the vehicle. The pumper can be controlled from either side, and the screen display (pictured) also shows a camera view of the opposite side of the apparatus.

Wyatt Compton, product manager for emergency response at Spartan ER, thinks the pumper of the future will stress safety aspects. “There’s carcinogen management through clean cabs; reduction of climbing activities on the vehicle; and safely transporting firefighters through air bag use, following distance mitigation technology, and lane departure warning technology,” Compton points out. He notes that in Spartan’s recreational vehicle business, it already has adopted collision mitigation and adaptive cruise control in addition to vehicle tire pressure monitoring, auto traction control, and stability control. “We’re working on trying to tailor collision mitigation to the driving needs of the fire service,” he adds.

Joe Hedges, product manager for chassis and aerials at E-ONE, says his company’s AXIS smart truck technology provides remote access to a pumper’s health. “It’s an amazing tool for a fleet manager who can identify where the pumpers are located, see how the vehicles are being used, and take that information and use it in driver training,” he says. “AXIS can establish the pumper as an information hub on a fire scene, and in the future, we can add more technology partners to the system. A generator manufacturer wants to be able to hook into AXIS, and we are working on NextStep for AXIS with Haas Alert.”

4 When fire departments go to a clean cab concept, they often specify easy-to-clean surfaces in the cab, like this easy-clean engine tunnel in a pumper built by SVI Trucks. (Photos 4 and 5 courtesy of SVI Trucks.)

5 All electronic valves are helping to shrink the size of pump panels, allowing shorter wheelbase vehicles or, alternatively, more compartmentation.

Ken Sebo, pumper business development manager for Pierce Manufacturing Inc., points out that Pierce has seen pumpers getting smaller for city applications. “They are trending smaller again, with low sides and ladders and high-rise packs mounted outside instead of in the body,” Sebo says. “Some city departments are putting high-rise packs on the catwalk on the low-rise side with the ladders above and only having full height compartments on one side of the pumper. And, the bodies are in the short to medium range, meaning about 170 to 180 inches long.”

Messmer says Summit also has seen a trend toward smaller pumpers in some markets. “I think there will be more of a call for smaller pumpers,” he says. “Manufacturers have been able to put 1,250-gallon-per-minute (gpm) pumps on the Ford F-550 chassis, and I think you’re going to see variations and improvements in the future in that size pumper.”

Bob Sorensen, vice president of SVI Trucks, thinks that the wider use of electronic valves and electronic gauges has driven down the size of pump panels. “Smaller pump panels translate into a shorter wheelbase for the pumper,” Sorensen says, “also with a more maneuverable vehicle with a tighter turning radius.”

Bill Doebler, vice president of sales for HME Ahrens-Fox, says that “for years, ‘bigger is better’ was the philosophy for pumpers. But there’s a movement toward smaller pumpers with shorter turning radii, along with lower hosebeds and lower crosslays to provide better ergonomics for firefighters. And, the use of electronic valves and gauges has simplified pump panels and allows manufacturers to make smaller and sleeker pumpers, like our short-wheelbase WUI pumper.”

7 Another safety trend being seen on pumpers is a return to mounting ladders on the side of the rig instead of the top and also the option of carrying equipment on top of the low side compartments.

8 In an effort to get more water on a pumper, Marion Body Works designs a water tank that comes up into a “T” behind rollup door headers on 27-inch-deep compartments. (Photo courtesy of Marion Body Works.)

9 The SAM control system by IDEX Fire & Safety manages multiple lines at different pressures; maintains set pressure; and monitors intake pressure, which allows it to switch back to tank water if there are any interruptions in supply. (Photo courtesy of IDEX Fire & Safety.)

Joe Scott, engineering manager of Sutphen Corp.’s Dublin, Ohio, facility, says the biggest thing in pumping controls is IDEX’s SAM control system. “The automation of pump controls frees up manpower to do other tasks because it automates most normal operations,” Scott says. “SAM maintains a separate pressure at each discharge, handles the intake of water and compensates for any pressure drops, and alarms if necessary. The pump operator even can control the pump through a wireless tablet.”

With technology driving the move toward smaller pump panels, Messmer says the real estate typically occupied by a side-mount pump panel can be used for other storage options because the pump panel has gotten so much smaller it can be put inside an over-wheel compartment.

Hedges agrees that smaller pump panels are giving departments the opportunity for more storage space. “Electronic valves are facilitating smaller pump panels, like the panel on our eMAX pumper, which is pretty small and inside the L1 compartment,” Hedges says. “And, smaller pump panels can be taken a lot further now with the new SAM control system from IDEX.”

Dave Reichman, national sales manager for Rosenbauer, says that one of the most common requests that Rosenbauer gets from departments for their new pumpers is information about clean cab concepts. “Right now, the customer dictates what’s important to them in terms of a clean cab because there are no standards at this time, so it’s a little like the Wild West,” Reichman says. “Rosenbauer is working with the University of Minnesota and other agencies to help us in determining what the ultimate clean cab configuration will be. In the meantime, we give departments what they want in terms of clean cabs on their pumpers.”

Reichman notes that Rosenbauer developed a clean air filter with the University of Minnesota that is a combination HEPA filter and active charcoal filter, which removes volatile organic compounds (VOCs) from the air. “Some departments are taking self-contained breathing apparatus (SCBA) out of their crew cabs and mounting them in external cabinets,” Reichman says. “And by taking air packs out of the cab, you no longer need air pack seats, which take up more real estate, so you can get away with a slightly smaller cab and transfer that area to the body.”

In terms of clean cabs in the pumpers of the future, Compton notes that his company makes options available to make a pumper’s cab easy to clean and to stay clean. “Surface coatings are easier to clean, from vertical and horizontal surfaces to walking surfaces,” he says. “We’re also working with seat manufacturers for seats that are impenetrable to fluids, dust, and dirt or that have covers that can be removed and decontaminated.”

Sorensen agrees with the thinking that clean cab pumpers will be a wave of the future. “Getting SCBA out of the cab is the best way to start with the clean cab concept,” Sorensen says. “The Phoenix (AZ) Fire Department has had its SCBA mounted in compartments for years and has not had any adverse problems.”

Mark Brenneman, assistant sales manager for 4 Guys Fire Trucks, says his company has seen a resurgence in the multiuse pumper, which often combines rescue and tanker disciplines. “With staffing declining in many fire departments, combining two or three units into one makes sense,” Brenneman says. “We also are using every bit of available space on those multiuse pumpers so no space is wasted. We will squeeze in an oddly shaped compartment any place we can put a door.”

Reducing a pump’s footprint is one way to gain more full-depth compartments on a pumper, says Shane Krueger, sales manager for Marion Body Works. “Using electronic components, we can put the pump in a small package behind rollup doors inside a small portion of the body and then design crosslays and some discharges under the cab,” Krueger says. “That way we can store more water in the body where the tank comes up into a “T” behind the rollup door headers on 27-inch-deep compartments. Or if they don’t want the extra water storage, the smaller pump and panel allow us to gain more full-depth compartments for the customer.”

Sebo notes that Pierce tries to provide departments with the most flexible storage solutions on its pumpers. “We have to package their equipment in unique ways because each fire department has its own specific needs,” he says. “We’re also seeing pumpers carrying a wider variety of emergency medical services (EMS) equipment, in addition to the pumper’s fire equipment, because often the pumper is being used for rescue and EMS type calls.”

Compton points out that in terms of safe climbing on pumpers, Spartan ER is tailoring access ladders to be easier to climb and also offers air bags on the back frame of the pumper to lower the vehicle to allow equipment to be loaded more easily.

Reichman says that in 2016 Rosenbauer International introduced its CFT concept fire truck. “Today, they are getting ready to make production units,” he says, “and this will be a smaller pumper that is an all-electric vehicle.”