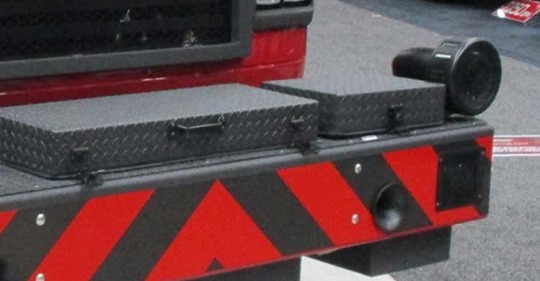 It’s time for me to get something off my chest. What’s with the fascination of “blacking” our fire trucks? In recent years, I’ve seen this trend slowly emerge. I fully understand there is a fascination with all black in personal vehicles, especially pickup trucks, SUVs, and sports cars. They may look cool and “manly.” But, fire trucks?

The North American love for chrome and polished aluminum diamond treadplate is one example of what has set our apparatus apart from European-style apparatus—and in a good way, as far as I’m concerned. A bright, clean, shining fire truck is an iconic symbol of community and country pride that has survived for more than a century. Yet, this new fascination with black is more puzzling because the matte black being used doesn’t even shine.

I was recently at a regional conference with an outdoor display of about a dozen fire apparatus. One of the pumpers was trimmed in matte black with no sign of chrome or anything shining. Beauty is in the eye of the beholder, and I thought this pumper looked awful compared to those around it. I paused and thought, I’m glad I don’t live in that community. Maybe the community is onboard with this, but I doubt it had any input. There is an interesting parallel here with fire stations—i.e., the exterior of the fire station (its appearance) belongs to the community. The interior layout and appearance belong to the fire department and the firefighters. A similar argument could be made that the appearance of a fire apparatus should be something the community will embrace.

So much for the cosmetics. What about safety? Black is the least visible color, unless you live at the north or south pole. Being conspicuous as emergency responders with conspicuous apparatus is a safety issue.

Particularly disturbing about this is the black reflective striping found on apparatus. I was on the National Fire Protection Association (NFPA) 1901, Standard for Automotive Fire Apparatus, technical committee when reflective striping became a requirement. There was a lot of discussion about the issue. Some thought it should be left up to each department. Two fundamental principles prevailed: It was determined that visibility is an issue during night, day, dawn, and dusk. Black striping is visible at night when lights are reflecting back into the driver’s eyes. However, it is not visible during the day. A compelling image that drove the revision to the 1901 standard for color was a photo of an emergency scene on a sea of concrete taken from an overhead bridge about a quarter-mile away. It was a bright sunny day, and the only conspicuous items on the highway were the yellow/red chevrons on the rear of the pumper.

Second, there a mandatory requirement for consistent signage across the country, including temporary road or lane closures. The technical committee agreed that the conspicuity of a fire apparatus should have some consistency. Think about this: How would it be if each community could decide the size, shape, and colors of a stop sign?

There is a reason for the colors of the chevrons. The lime yellow has been determined all over the world as the most conspicuous color in all lighting conditions. Your department probably has safety vests for operating at roadway scenes—at least I hope so. What color are they? I bet they aren’t black!

The passion for the matte black on fire apparatus is amazing among some fire departments. A dealer told me recently that it received an order for a pumper, and the department insisted on the matte black look. It also wanted a Roto Ray (an awesome warning light) on the apparatus and became upset when the Roto Ray manufacturer would not provide the light with a matte black finish.

A few fire departments have argued that the matte black finish is not a safety concern because they specify additional warning lights on their rigs. That concept also has its drawbacks. There is such a thing as too many warning lights that confuse and blind drivers.

A final thought: If your department specifies an apparatus that has exceptions to safety standards, such as striping, then the manufacturer will almost always ask the department—i.e., the chief—to sign a waiver. If your chief is willing to sign a safety waiver, he does not need to be the chief. What else will he do to compromise your safety? There is no legal or scientific evidence to support his signing of a waiver of liability.

ROBERT TUTTEROW retired as safety coordinator for the Charlotte (NC) Fire Department and is a member of the Fire Apparatus & Emergency Equipment editorial advisory board. His 34-year career includes 10 as a volunteer. He has been very active in the National Fire Protection Association through service on the Fire Service Section Executive Board and technical committees involved with safety, apparatus, and personal protective equipment. He is a founding member and president of the Fire Industry Education Resource Organization (F.I.E.R.O.).