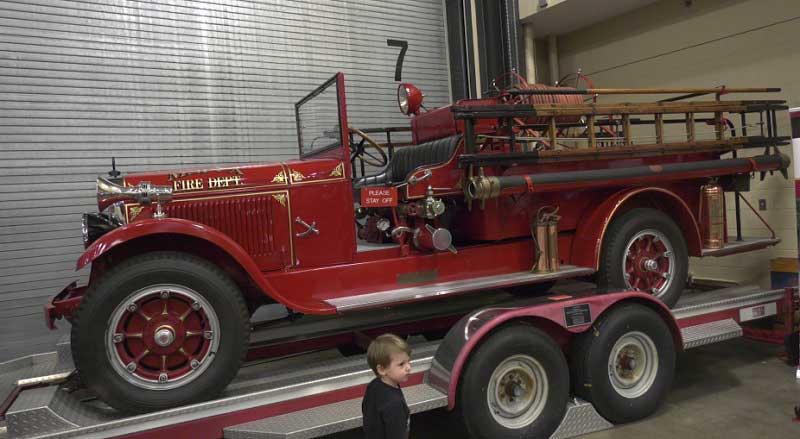 In 1930, the Village of Wausaukee, Wisconsin, purchased its first piece of motorized fire apparatus. A 1930 Reo Speedwagon chassis was fitted with a Peter Pirsch fire body that included a 500-gpm fire pump. The pumper would serve the village of some 500 residents for many years. At some point, the pumper was retired and sold to a nearby meat packing plant. The Wausaukee (WI) Fire Department and the village residents lost track of the pumper until a July 4 event in the early 1990s. A fire apparatus enthusiast from Minnesota brought the pumper back for the July 4 parade and an opportunity for the village residents to see an old friend back in town. Members of the fire department were enthused to see the pumper. They even found some equipment that had been on the rig back when it was in service and donated several items to the gentleman who brought the rig with the hope that he would come back again for future July 4 events. That did not happen—at least not for a very long time.

It turns out that the gentleman who brought the rig to Wausaukee was Tom Brace, executive director of the Minnesota State Fire Chiefs Association (MSFCA). Tom had purchased the truck from a deputy sheriff in the Green Bay, Wisconsin, area. The deputy bought the truck at an auction—possibly from the meat packing company. The project to restore the truck proved bigger than Tom envisioned and that is how the MSFCA adopted the rig and footed the bill for the complete restoration. The restored pumper became a promotional piece of vintage fire apparatus that was displayed at various fire service events throughout Minnesota. Retired fire marshal Tom Brace took great care of the vintage pumper. The association had a special travel trailer made to order to accommodate the vintage pumper. Over time, the rig would run its course as a featured part of what the association wanted in its display. A decision was made by the chief’s association earlier this year to offer the pumper for sale by a sealed bid auction.

Eagan, Minnesota, Chief and MSFCA member Mike Scott felt that a serious effort should be made to determine the original owners of the pumper. Mike thought that the original owners should know that the pumper was being offered for sale and give the original owners a chance to have their rig back. Finding the original owners became a big puzzle. Members in the association did not know if the truck had originally served in Minnesota or in some other destination. Through research and some good detective work it was thought the rig had served in northern Wisconsin. Things pointed to the small village of Wausaukee, a village of approximately 500 persons located 60 miles north of Green Bay, Wisconsin. Scott had sold a used fire apparatus to the fire chief in Crivitz, Wisconsin. A phone call to the Crivitz chief was to learn if he had a contact in Wausaukee. Not only did the Crivitz chief know the Wausaukee chief, they are also good friends and were close neighbors. Eric Edlebeck was the Wausaukee Fire District Chief. Scott was able to contact Eric and share his news about the 1930 Reo-Pirsch pumper being offered for sale. Eric was thrilled to hear the news. Most members of the fire department and the residents in the community had long ago given up on ever knowing the whereabouts of their old pumper let alone learning that the rig was for sale.

The Wausaukee Fire Chief and all the members of the department got the ball rolling and were able to raise $7,500 to bring the rig home. They did a fantastic job! The fire department came together to raise the funds from a combination of food sales at the local fair and from a sportsman’s banquet. When the sealed bids were opened—there were only two—the $7,500.00 offered by Wausaukee was the high bid. The truck was coming home!

October 17, 2019, at 1:00 pm at the MSFCA fall conference in Duluth, Minnesota, the keys to the Reo-Pirsch pumper were handed to Wausaukee Chief Edlebeck. He shared “We have strong community support where we are at, and I guess you have to live and breathe it every day giving back, and it’s tough to keep it together, but this is such a great moment”.

The pumper is in beautiful shape. It appears the pumper had undergone a complete restoration and had very good care while with the MSFCA. The rig does run and can also pump. It did come with the specially built travel trailer. Following the ceremony in Duluth, the pumper made the trip back to Wisconsin and is now parked in the original garage where the rig responded from back in the 1930’s. The village hopes to build a special building to showcase its wonderful piece of history. With the community spirit that Wausaukee demonstrated to raise the funds to win the auction to bring the truck home, building that showcase should not be a problem.

What is your story on a vintage piece of fire apparatus that you or your fire department owns? There are many interesting stories to share about vintage fire trucks. Please feel free to contact Ron Heal at ron.lois224@gmail.com.  Special thanks to FA&EE feature writer Al Petrillo for his lead on this electronic story.