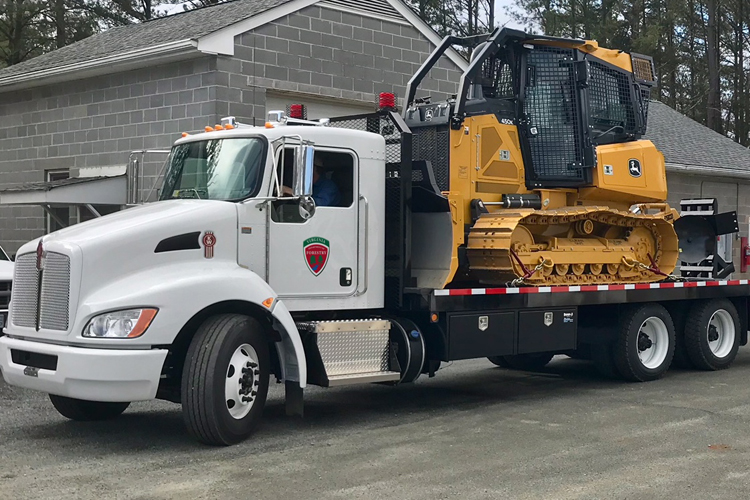 The fire dozer is the go-to piece of equipment to cut trenches and lines that keep wildfires from spreading. “Getting our bulldozers to the scene quickly keeps fires from spreading—they are our firefighters’ best friend,” said Danny Fortune, the Virginia Department of Forestry’s transportation officer. “When firefirefighters see the dozers, it’s like how infantrymen in World War II viewed tanks coming in for support. They make all the difference, and we count on the Kenworths to get that equipment were it needs to go.”

To cover all the Commonwealth’s forests—nearly 16 million acres—the agency utilizes 88 transporter/dozer units, 56 of which are Kenworths, purchased through Truck Enterprises Harrisonburg.

Each dozer is mated to a truck, which has a beaver-tail loading ramp. Spread out among three regions in Virginia, drivers of the Kenworth T370s also operate the bulldozers. According to Fortune, the Kenworth’s low profile is an advantage. “We have some overpasses that aren’t very tall,” he said. “One of the procurement requirements was for a truck lower than 13 feet, 6 inches—a necessity since the units must be able to go under all overpasses. Kenworth was the only OEM able to meet that requirement.”

The trucks were spec’d with firefighting and high heat in mind. “These trucks can really get blasted by heat—not often, but it can happen,” said Fortune. “We also spec’d locking differentials—which is needed since the trucks are off-road and need maximum traction.”

The Kenworth T370s are powered by the PACCAR PX-9 engine rated at 330 hp and use Allison automatic transmissions. The trucks are geared for low-end torque to help in pulling power in difficult terrain. 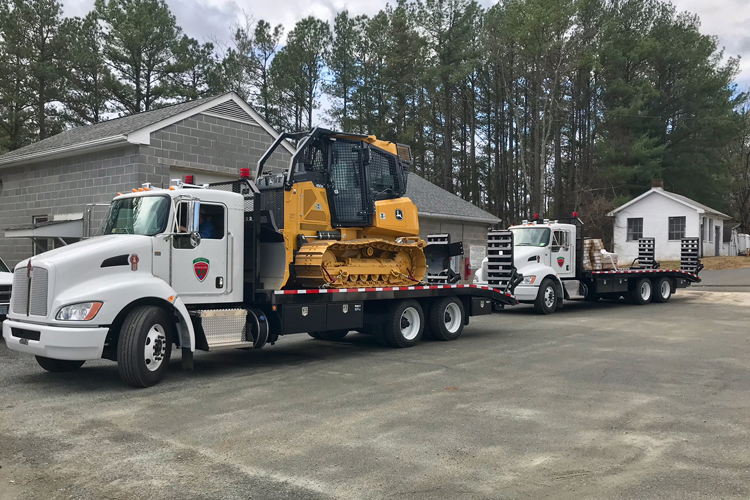 Virginia has two fire seasons, the spring and the fall—Feb. 15-April 30, and Oct. 15-Nov. 30. “Those are the seasons when we’re on high alert—we have high winds and a lot of outdoor burning. In the fall, the leaves are on the ground and dry out, adding more potential fuel to fires. In the spring, the forest floor dries out before the grasses begin to grow. In a three-day period in early March, we responded to 127 fires covering more than 302 acres. We protected at least 78 homes with a combined value estimated at more than $12 million. Most of our wildfires are a result of debris burning. In a typical year, we will respond to 900 wildfires, which burn around 12,000 acres.”

During the “off season,” the Kenworth T370s and bulldozers are on call to help neighboring states. “We all help each other in times of need,” said Fortune. “We also help our federal partners in the state, such as U.S. Forest Service ranger districts that are responsible for 1.8 million acres of land in the the George Washington and Jefferson National Forests.”

According to Fortune, mileage is very low on the trucks during the off-season. “We’ll make sure the trucks are run at least once a month to keep everything moving and lubricated, so they are always ready to go when needed. We also promote fire prevention—using our trucks in parades, as well as school programs with our Smokey Bear program.”