Command vehicles often become the hub of activity at large incident scenes because of the communication, control, and monitoring functions built into them. The various styles of command vehicles used by fire departments range from large RV-sized vehicles and trailers to small command areas built into the back of SUVs and pickup trucks.

Joe Messmer, president of Summit Fire Apparatus, says that while large command vehicles and trailers continue to be supplied to departments that have regional responsibilities, many recent command units Summit has done are on smaller medium-duty chassis, both commercial and custom. “On that size command vehicle, we’ll put on a standard 20-foot-long box that’s wide open on the inside and then set up the partitions as the department requests,” Messmer says. “We’ve even outfitted extended cab rescue-pumpers with modified slide-out tables, desks, and cabinetry to allow a command post to be set up, especially when the users need to get out of the weather. Some departments get started at an incident with a unit like that and then hand command duties off to a large command post when it arrives later on the scene.”

1 E-ONE built this command truck for the Sarasota (FL) Fire Department on a Freightliner 114 D chassis with a 22-foot body. (Photos 1-5 courtesy of E-ONE.) 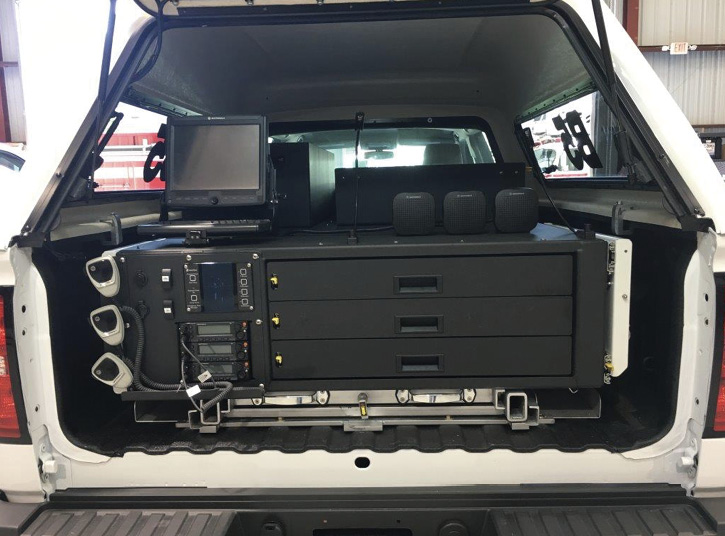 2 Virginia Beach (VA) Fire Rescue had E-ONE build a battalion command vehicle on a Ford F-550 four-door chassis with a slide-out tray at the rear holding all the command and control equipment. 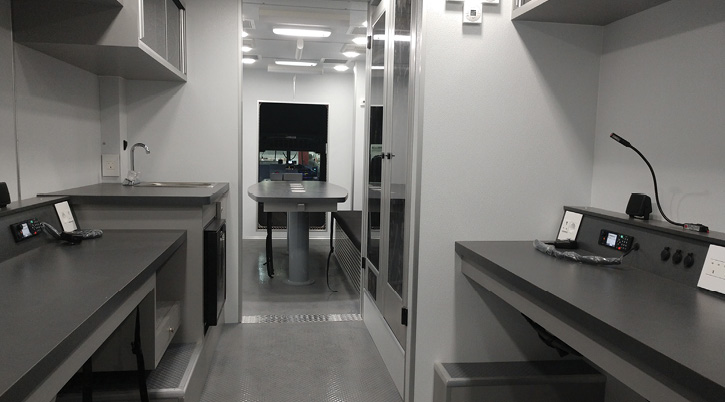 3 This is the interior layout of a command truck that E-ONE built for Tshwane, South Africa. 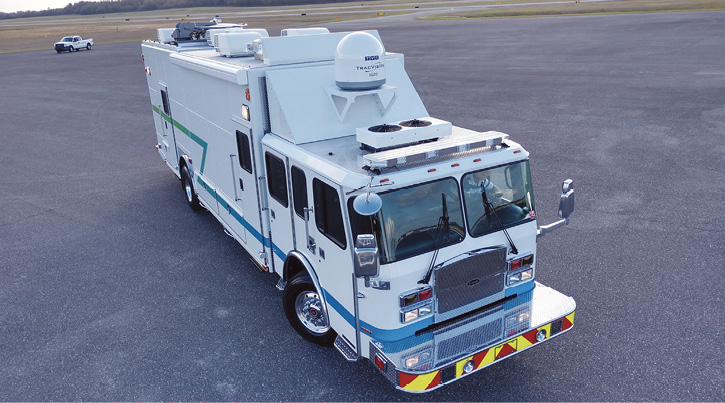 4 Aramco Saudi Arabia had E-ONE build this command truck on a custom chassis. Note the multiple access doors on the curb side. 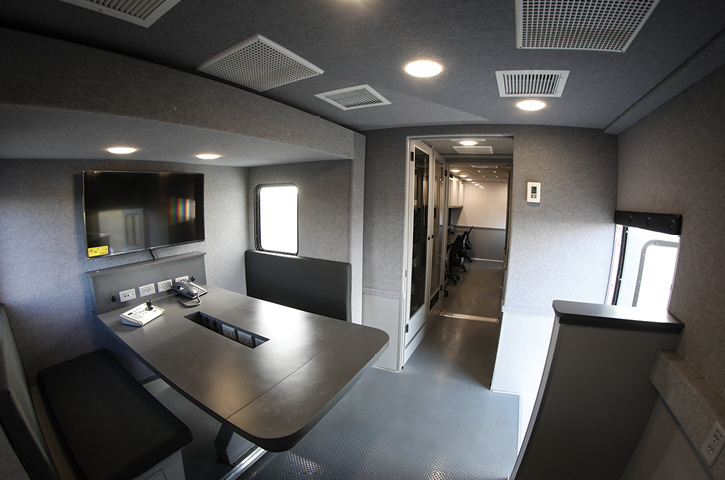 5 Part of the interior of the Aramco Saudi Arabia command truck built by E-ONE.

Mike Marquis, vice president of national sales for Rescue 1, says that command units Rescue 1 has sold to various fire departments have driven nonfire industry businesses to purchase command units from them. “We built a command unit for AT&T that’s a disaster-driven response truck,” Marquis says. “If an area loses cellular communications, they move in a whole fleet of vehicles to fix it and need a command truck to control them.” The unit Rescue 1 built for AT&T is on a Ford F-650 chassis with a 22-foot body housing an interior command area with a slide-out room on the street side.

“The AT&T command truck has a mobile satellite dish and surveillance camera on a mast at the back,” Marquis notes, “and electrical power is provided by a Stadco onboard water-cooled diesel generator that can be operated in a closed compartment for extended periods of time.” He adds that New Jersey Natural Gas recently purchased a command truck from Rescue 1 that is nearly identical to the AT&T rig.

KME has built eight command trucks for the U.S. Navy’s Explosive Ordnance Disposal (EOD) units, Mark Kopunek, product manager for KME, notes. “They are on International 7400 commercial chassis with Super Single split-rim wheels and tires and have a ramp into a compartment that carries a bomb disposal robot,” he says. “There’s an onboard system to keep the robot charged, a telescoping mast camera at the rear, and equipment inside to communicate and operate the robot.” 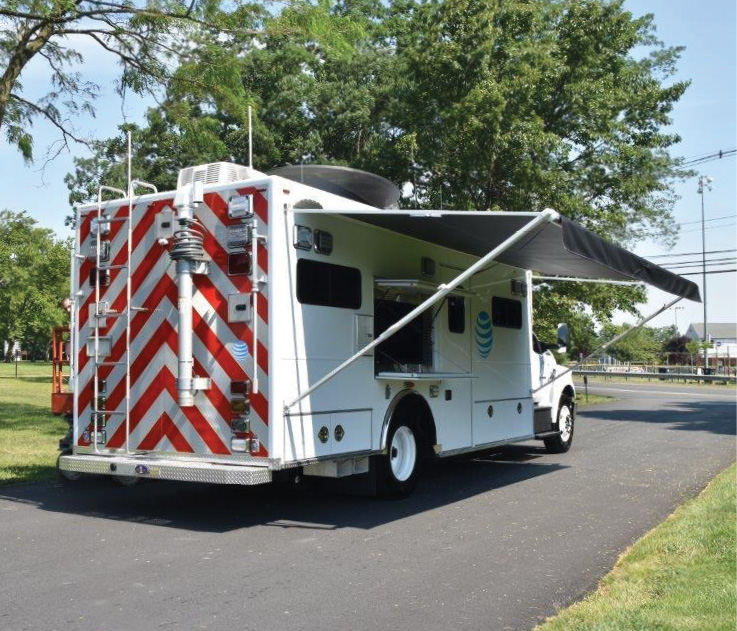 6 Rescue 1 build this command unit for AT&T that functions as a disaster-driven response truck and includes a mobile satellite dish and a surveillance camera on a mast at the back of the truck. (Photos 6-7 courtesy of Rescue 1.) 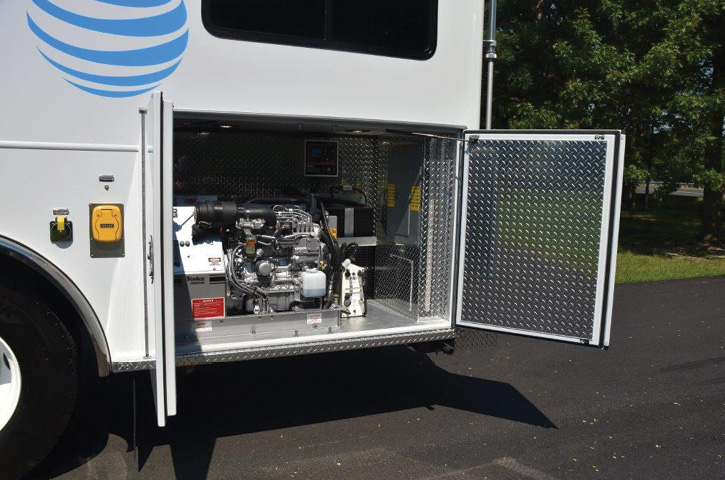 7 The AT&T command truck built by Rescue 1 has electric power provided by a Stadco onboard water-cooled diesel generator that can be operated in a closed compartment.

Unruh Fire has built a number of command vehicles on pickup trucks and SUVs, says Wes Schamle, Unruh’s sales manager, but most of its command truck work has come in the form of command trailers used for mass casualty type incidents. “We built a 20-foot bumper-pulled trailer hauled by a Ford F-250 pickup for the McPherson (KS) Fire Department that can function off of its generator or from shore power,” Schamle says. “It has the command area and also a small kitchen with a microwave, refrigerator, and coffee maker.”

Unruh also built an unusual 36-foot command trailer on a gooseneck that’s pulled by a Ford F-550 for the Newton (KS) Fire Department, Schamle says. “The unusual part is that the regional command trailer is built so it is Americans with Disabilities Act compliant to accommodate a chief who uses a wheelchair,” he says.

Mike Mildner, rescue sales specialist for E-ONE, says that E-ONE builds the chassis and cabs for command vehicles, then hands the units off to Vanmor Enterprises, which finishes out the command interiors and integrates all the electronics. “All our command units are on custom chassis,” Mildner points out, “typically with up to a 30-foot body and usually having a custom communications package; an office interior; storage options with up to six command work stations; conference room seating for seven persons in a slide-out; and a galley area with fridge, microwave, and coffee maker.” A smaller command platform could be built on a commercial chassis, Mildner adds, “like a unit built for Sarasota, Florida, on a Freightliner 114 SD chassis with a 22-foot body.” 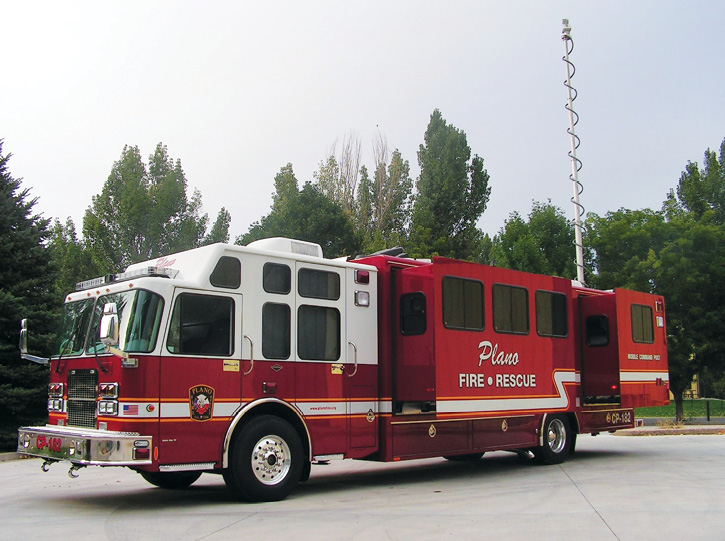 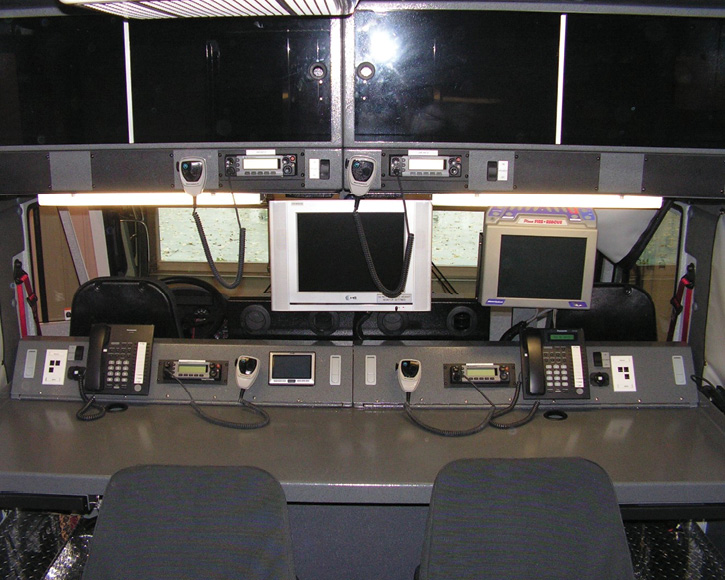 9 Part of the interior of the command truck SVI built for Plano (TX) Fire Rescue. 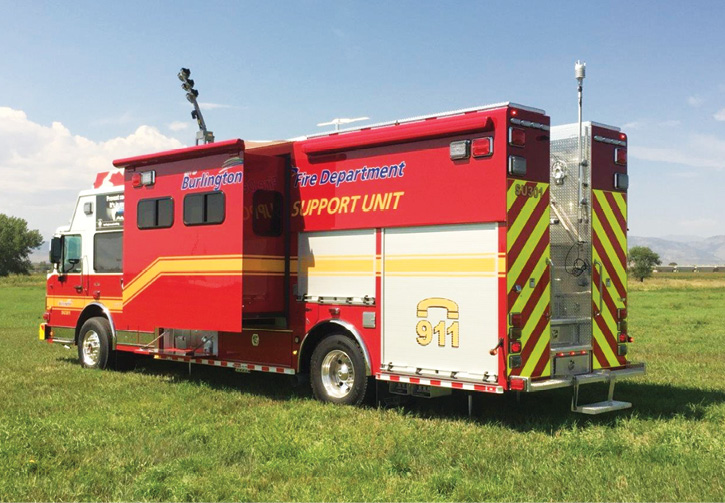 10  The Burlington (ON) Fire Department had SVI Trucks build this all-hazards command truck. 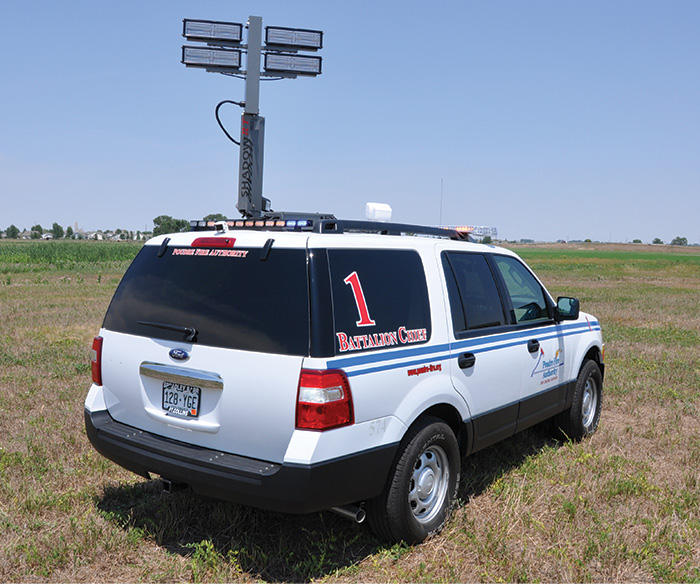 Bill Proft, rescue program director for Pierce Manufacturing Inc., says Pierce builds command units on custom chassis at its Appleton, Wisconsin, plant and ships the chassis to Front Line Communications in Clearwater, Florida, where the command interiors are installed. “Front Line is well-versed with wiring and electronics and does a great job on these command units,” Proft points out. He adds that Pierce is introducing a smaller body command truck soon called a Critical Response Unit. “It will be on a Ford 350 Transit chassis,” Proft notes, “and will have two or three seating positions in back, along with lots of electronics packages built into the smaller body.”

Bob Sorensen, vice president of SVI Trucks, says SVI recently built a multiresponse vehicle for the Burlington (ON) Fire Department that handles command, urban search and rescue, hazardous materials, and technical rescue responses off the same chassis. “Burlington is an all-volunteer department that supports a career fire department, so they got this large tandem-rear-axle vehicle that serves as a command and scene support truck for all sorts of rescue and hazardous type calls,” Sorensen says. “Another Canadian department, Fort St. John (BC) Fire Rescue, had us build a nearly identical truck to Burlington’s.”

Sorensen says SVI recently built a command truck for Plano (TX) Fire Rescue on a custom Spartan single-rear-axle chassis and cab with three slide-out rooms to give greater functionality. “We put a satellite dish on top of the unit to allow them to communicate in times of natural disasters like tornados and hurricanes,” he notes. “We also have built smaller size command trucks on Chevy Suburbans and all brands of SUVs, but those typically are used by smaller fire departments, like the ones we built for several Colorado departments—Fort Collins Fire Department, Windsor Volunteer Fire Department, and Greeley Fire Department.”

Grant Spencer, vice president of Spencer Manufacturing, says his company has built command areas into large rescue trucks, typically on custom chassis. However, he adds, Spencer has done a number of command units on Chevy Suburban and Tahoe chassis, with slide-outs in the back that hold all the necessary gear for a mobile command space.

Kopunek says KME recently built a command center rescue truck for a large West Coast fire department that has a separate area built into the body for the command function. “The forward body section is the communications area and has a countertop with a large wire connection point for conduit,” Kopunek says. “In the rear of the cab, there’s an additional large countertop-style desk, and access to the interior is from the curb side of the vehicle.”

Mildner notes that software on command trucks “has become super advanced where users are able to control all the truck’s systems from a tablet or laptop. We also are seeing a surge in drone applications in command, hazardous materials, and fire recon and have been working with FlyMotion in Tampa, Florida, to put drones on command vehicles and other fire trucks. The advantage of a drone on a command vehicle is it can take readings and let the incident commanders know what kind of hazards they are facing or what fire behavior is doing.”