UTV and ATV Units Being Equipped for Fire, Rescue, and EMS Duties

Fire departments are turning to utility terrain vehicles (UTVs) and all-terrain vehicles (ATVs) for a number of different applications, including emergency response in rough terrain, as wildland firefighting units, as ancillary pumpers to engine companies, and as quick-response rescue and emergency medical service (EMS) units.

Jed Leonard, vice president of government and defense sales for Polaris®, says that his company’s vehicles have been used by various fire agencies “to improve response times and get to hard-to-reach areas without compromising mission effectiveness. These light off-road vehicles let firefighters get to places their other vehicles can’t reach effectively, whether it be mountainous or hilly terrain, forested and rural areas, or tight urban environments.” 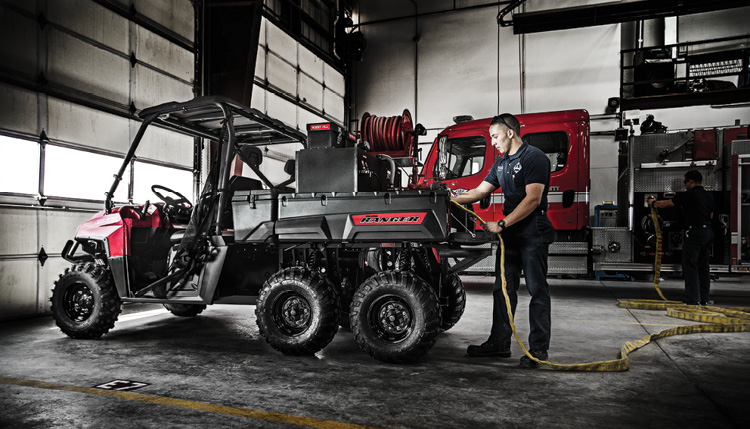 1 This Polaris Ranger is set up for fire suppression on a 6×6 chassis. (Photos 1 and 2 courtesy of Polaris.) 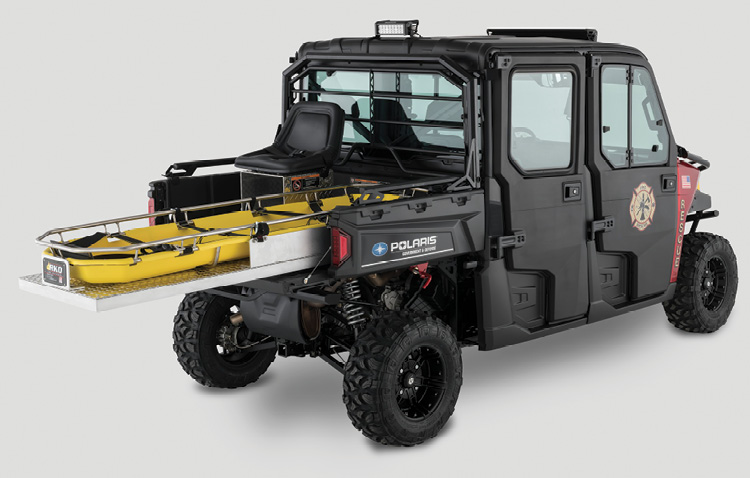 2 This Polaris Ranger 4×4 is a dedicated rescue/EMS unit.

The Polaris Ranger® has been used widely for both fire and rescue applications, Leonard says, and by employing a skid approach to the bed of the unit, it can be used for multiple missions by changing the configuration from fire to rescue or to event participation. “We also have an integration capability with our vehicles where we partner with RKO for fire skids and Action Fleet and Federal Signal for various other parts of the skid kits,” he points out.

While Polaris is now delivering a newer Ranger platform, the Ranger 1000 XP, it also offers the General® chassis, which has a smaller rear bed than the Ranger, meaning it has less payload capacity but with a different suspension and seating configuration that suits it well for general patrol or beach patrol type missions, Leonard notes. Polaris also added all-electric GEM™ e2 and e4 vehicles to its public safety line.

Ben White, sponsorship manager for Textron, notes that Textron makes a wide variety of side-by-side UTVs and ATVs. “What we see most commonly chosen by fire departments is the Stampede 4 because it can carry four passengers and 600 pounds of equipment in its dump bed,” White says. “The Stampede 4 is powered by an 80-horsepower (hp) electronic fuel injection (EFI) gasoline engine and has a two-inch receiver at the rear that allows it to handle an additional 2,000 pounds.” Textron also makes an extended cab version of the Stampede 4 that allows for 170 pounds of separate storage where hoses, tools, extinguishers, medical bags, and backpacks can be carried, he adds.

The Prowler Pro made by Textron is similar to the Stampede 4 but has seating capacity for six and can carry 1,000 pounds in its dump bed, which can take a skid unit. It’s powered by a 50-hp EFI gasoline engine, it has a two-inch receiver as standard, and its seats are removable to allow for more gear storage. 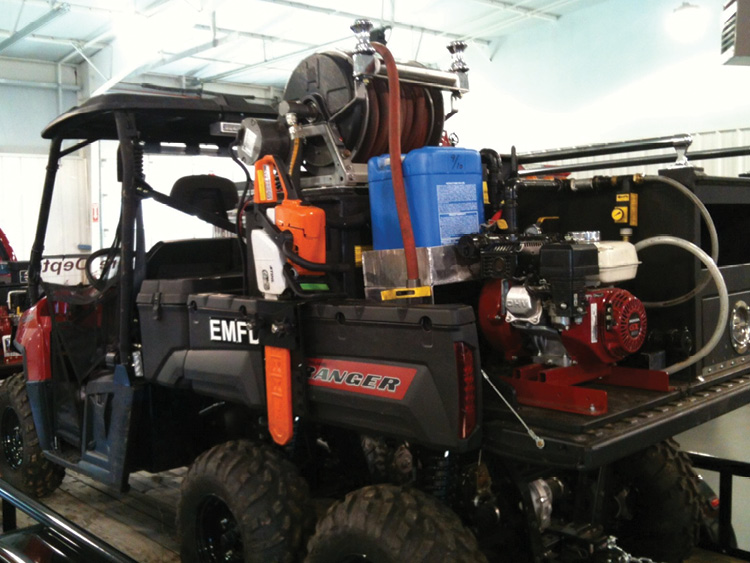 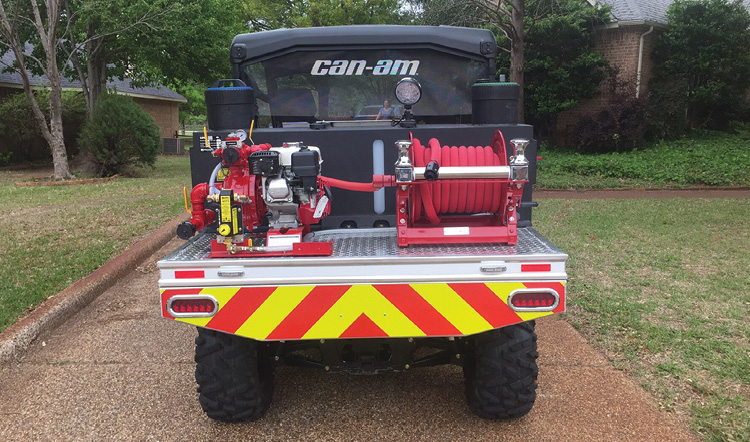 4 This CET fire suppression unit is installed on a 4×4 UTV.

RKO designs and manufactures its utility vehicle fire/rescue units by communicating with customers regarding unit size, function, and budget. RKO UTV firefighting platforms can be configured to hold up to 300 gallons of water and can include foam. Foam injection systems are integrated to handle Class A or Class B foam concentrates. Units can be supplied for Polaris Rangers, Kubota RTVs, John Deere UTVs, Kawasaki Mules, or any other UTV currently available. 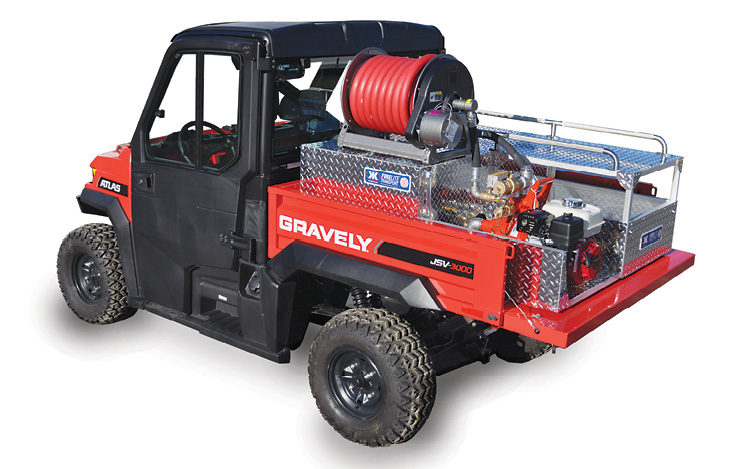 CET’s ATV FIRE PACK 2 has a 6.5-hp twin-impeller pump that generates 70 gpm at 10 psi, 40 gpm at 100 psi, and 20 gpm at 125 psi. The skid unit has a 75-gallon fully baffled polypropylene water tank, a manifold with multiple outlets for one-inch and 1½-inch lines, an enclosed storage compartment, and a Stokes basket area. CET’s FIRE PACK 3-EMS is a universal design skid unit that fits most UTVs, Halpin points out. “The polypropylene unit is rugged, rustproof, and affordable,” he says, “and is designed to be quickly installed and turns any UTV into a mini ambulance. A long board can be attached to the unit using 10 [hook-and-loop] D loop straps, and the unit has enclosed storage under the patient area.”

Kimball Johnson, president of Kimtek Corp., says that Kimtek’s FIRELITE® FCW-206 compact wildfire skid is the company’s most popular unit that’s used only for fire suppression applications. The unit has a Darley-Davey® two-stage twin-impeller high-pressure pump that flows 65 gpm at 48 psi, 50 gpm at 81 psi, and 20 gpm at 120 psi and is driven by a 5.5-hp Honda gasoline engine. It can carry either an integrated 55-gallon or 70-gallon polyethylene water tank and has a F4000 series Hannay® manual crank reel with 100 feet of ¾-inch or 50 feet of one-inch Boostlite booster hose. “Our skid units are plug-and-play and have options like a Scotty foam system or an upgrade to an electric reel,” Johnson points out. 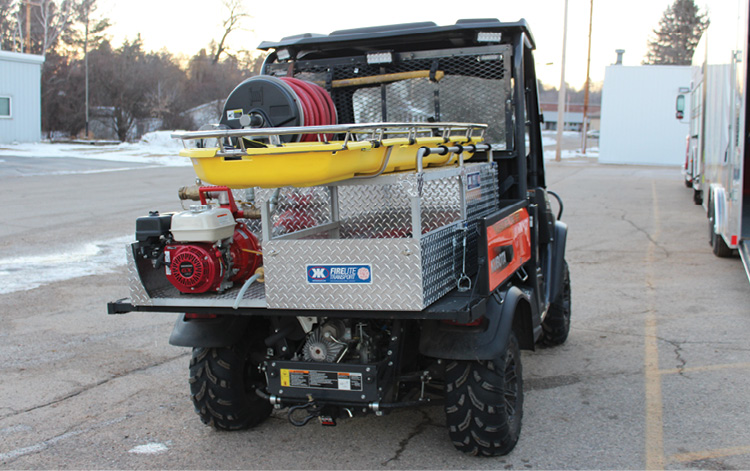 Kimtek’s FIRELITE FDH-203 Transport Deluxe is the company’s best seller of fire-rescue skid units for UTVs and typically is used on a 4×4 UTV, Johnson notes. The skid unit has the same pump configuration and water tank that the FCW-206 uses and has two 48- by one-inch grab rails at the rescue area for mounting a Stokes basket or long board. The Supermax design is similar but carries 85 gallons of water and will fit on a 6×6 UTV. Kimtek also makes the MEDLITE® MTD-103 Transport Deluxe EMS skid unit. It has an all-aluminum chassis, rescue area to secure a long board or Stokes basket for patient transport, two ambulance-grade 48- by one-inch stainless steel rescue grab bars, a slide-out tray in the storage area, an oxygen bottle holder, a retractable utility pole, a third attendant rail, and a storage area with a tailgate. 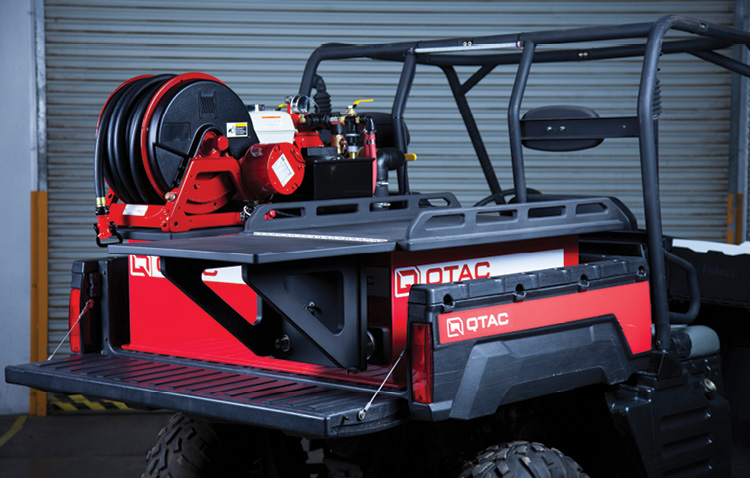 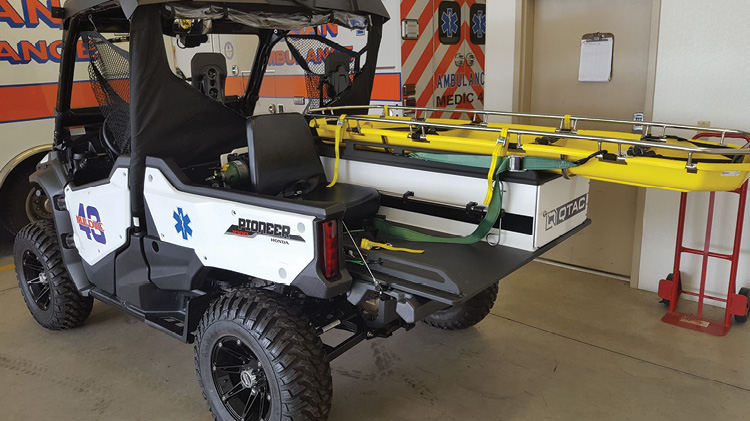 8 This QTAK EMS-F rescue skid is shown on a 4×4 Honda Pioneer UTV.

Larry and Cathy Whitney, owners of Whitney Ranch in La Honda, California, purchased a Kimtek FIRELITE wildland skid unit and mounted it on a Kubota 4×4 UTV. “We have a 10-acre ranch in San Mateo county with a 3,000-square-foot home, a rental cabin, a 1,000-square-foot office, a four-stall horse barn, a 1,500-square-foot hay barn, and a 700-square-foot hay barn,” Larry Whitney says. “We are in a pretty rural area and due to our location there could be a delay in getting fire apparatus in here,” he says. “After the adjoining property caught fire, we bought the Kimtek unit with a Scotty around-the-pump proportioner to put on our Kubota. We have our own hydrants and portable water storage system, so if we get a wind-driven fire, we can pretreat our buildings with foam, and if it’s a ground fire, the unit allows us to go after it or do perimeter and structure protection.”

Jason Black, president of MTECH Inc., says its QTAC Fire and Rescue Apparatus division makes the QTAC 20S, 85S, 85HP, 75 UHP, and 125HP firefighting skid units. Each of the units is powered by a WATERAX VERSAX 6 pump and carries a water tank whose gallonage is noted in the model number. The S models are standard pumping capacities, while the HP model is high-pressure, and the UHP is ultra-high pressure. QTAC also makes the QTAC 70EMS-L, 85EMS-C, 85EMS firefighting and rescue skid units that incorporate WATERAX VERSAX 6 pumps and a Stokes/long board transport area.

In addition, QTAC EMS rescue skids are available in two versions: the QTAC EMS-R and the EMS-F. The EMS-R, which weighs 145 pounds, has a PolyTough™ copolymer polypropylene body with a built-in storage compartment, rescue litter platform, and attendant seat. The EMS-F is a stripped-down rescue skid, Black says, designed to be extremely lightweight and easy to load and unload into a UTV. It also has a PolyTough body, weighs 120 pounds, has a deck with rails for securing a rescue basket, and has an adjustable attendant seat.