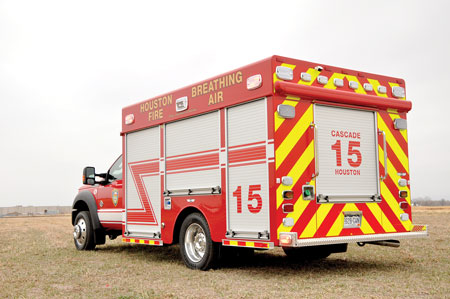 Specialty vehicles play an important role in a fire department’s fleet, whether it’s a platoon full of different units or a single rig for a specific dedicated purpose.

The types of specialty vehicles and the specific models being made vary among fire departments and regional response teams according to the special requirements dictated by their response areas and types of hazards they face. But, typically they are vehicles used for command, hazmat, specialty rescue (such as dive teams), air and light, urban search and rescue (USAR), or any combination of these functions.

Bob Sorensen, vice president of SVI Trucks, says many fire departments talk about building smaller specialty vehicles but end up having manufacturers put together large tandem-rear-axle rigs with high gross vehicle weight ratings (GVWRs). “We recently built a tandem-rear-axle specialty rescue/command vehicle that has a small crane on the back of the unit,” Sorensen says. “And, we are seeing more trucks being provided as turnkey units with all of the equipment already mounted in the vehicles. Some fire departments want to issue a single purchase order for a vehicle and all its equipment, and they’ve even provided us with their laptops and radios to be installed too.”

Bill Himstedt, director of product management and rescue sales for E-ONE, says the specialty vehicle market has changed in the past two years. “We had been delivering nonwalk-in bodies with command cabs and some power requirements,” Himstedt says. “But, recently a lot of customers are asking for more complex trucks, basically combination units with front walk-in modules and the backs being walk-arounds. They want light command functions and office space up front on a heavy-duty, fire-rated body that can be upfitted in the future if needed.”

Ferrara Fire Apparatus built an air and light truck for the Monroeville (PA) Fire Department on a heavy-duty custom cab with a walk-through body accessed from the rear. “The truck had a huge compressor in the center of the body to make its own air where firefighters could fill their bottles out of the elements,” says Kevin Arnold, rescue and specialty vehicle product manager for Ferrara Fire Apparatus. “We’re also being asked to install more onboard gateways on most of our trucks to allow them to have wireless hot spots of their own.”

Scott Oyen, vice president of sales for Rosenbauer, says his company recently built air and light trucks for Hamilton County, Ohio. “One of them had twin generators, eight electric cord reels, a compressor, and boards set up for all kinds of plug-ins,” Oyen says.

Doug Kelley, product manager for KME, says KME has built air and light units for customers from Ford F-550-size chassis up to custom chassis rigs. “The bigger ones might have a cascade system or a full-blown compressor, typically with a large generator of 25 kW or more,” Kelley says. “On the smaller side of air/light units, we built Ford F-550 units for the U.S. Air Force, the U.S. Navy, and the Zionsville (IN) Fire Department.”

According to Joe Messmer, president of Summit Fire Apparatus, Summit recently built an air and light truck for the Columbus (OH) Fire Department with an 80-kW generator, a 35-cfm compressor, a dozen 6,000-pound Department of Transportation (DOT) cylinders, and a Scott RevolveAir charge station. “The RevolveAir has two connection stems for air cylinders,” Messmer says, “which, after they are connected, you revolve into the chamber to fill while two new cylinder stems are revolved out for connection.”

For Kenton County, Kentucky, Summit built an air and light truck that will service 15 fire departments in the county, Messmer says. “It has a 100-kW generator, twin Will-Burt light towers, four 300-foot electric cable reels, 10 750-watt tripod lights, a 32-cfm air compressor, eight 6,000-pound DOT cylinders, a Scott RevolveAir charge system, and room on the back of the truck to do the filling,” he says.

Bill Proft, rescue program director for Pierce Manufacturing Inc., says Pierce has been steadily building breathing air trucks with compressors and cascade systems for fire departments around the country but recently has seen an uptick in requests for hazmat trucks. “We have two hazmat units on order for the San Antonio (TX) Fire Department that are building on two-door Velocity cabs and chassis with 33-foot-long aluminum bodies on single rear axles,” Proft points out. “The bodies are walk-in style where you enter from the rear, there are cabinets on the sides of the walkways, and toward the front they widen out with slide-outs, seating areas, and electronic racks.” Because there are no crew cabs, the bodies were able to be extended into those areas, Proft notes, and there is an access door at the front of each body on the officer’s side. Each vehicle also will be fitted with a telescoping mast that will carry both digital video and infrared (IR) cameras.

Kelley points out that KME recently completed a hazmat truck for the Philadelphia (PA) Fire Department. “It has a large generator, a telescoping mast, and a crane that can be used for stabilization or to handle 55-gallon drums or decontamination tents,” he says.

Shane Krueger, national sales manager for Marion Body Works, says Marion recently has done a few hazmat vehicles that have separated seating, storage, and laboratory work areas. “It’s the same thing with command units that we build,” Krueger says. “They usually have a meeting room, a lab or work area, and a storage area, which means longer vehicles, usually on tandem rear axles. Many of the rigs have slide-outs, and the typical wheelbase is 300 inches with a 556-inch overall length.”

The electrical complexity in such vehicles is so much greater than on the average truck, Krueger notes. “They have a lot of computers, touch screens, screens you can write on, cell phone boost systems, lots of scene lights, cameras on towers, lights on towers, and satellite dishes,” he adds.

Arnold says Ferrara built a specialty vehicle for an unusual purpose-crowd and riot control-for Bossier City, Louisiana. “It was a mini pumper on a Ford F-550 chassis and cab that carried a solution in the tank that when sprayed on a crowd sticks to people and smells very bad,” Arnold says. “They called it the Skunk Truck.”

Rosenbauer has built simulation training vehicles for hospitals, Oyen notes. “They are similar to command vehicles, but in the back there’s a mockup of an ambulance,” he says. “In the center is a control room and emergency room setup, and the front has slide-outs that simulate an operating room. Large regional hospitals use the units to go out to their subsidiaries and train personnel in handling patients.” The rigs are on Freightliner commercial chassis with four-door cabs and run more than 50 feet long.

Himstedt says most of the specialty vehicles E-ONE has been building recently are what he calls hybrid units. “This goes back to the multiuse vehicle where the walk-in part of the cab holds a light command area with 12-volt and USB receptacles where they can plug in a laptop and get people out of the elements,” he notes. The rest of the vehicle is typically set up to house the variety of equipment the department wants to carry, including rooftop coffin compartment storage, he adds, “making them more feature-rich so the trucks get used more instead of having to rely on three different pieces of apparatus.”

Sorensen says SVI currently is building a USAR truck for the Vancouver (BC) Fire and Rescue Services on a custom Spartan chassis with a long four-door cab, a 24-inch raised roof, and a 26-foot body on a tandem rear axle. “There is specialty cabinetry in the back of the cab, coffin storage on top, and plenty of compartments for lots of timber for cribbing and shoring,” he points out. “We’re also putting a small breathing air unit on the truck so they can provide their own breathing air through umbilical lines during search and rescue functions. The truck also will have a full complement of ground ladders, a complete set of hydraulic rescue tools and their power unit, a 32-kW generator, and a Command Light tower.”

Jeff Bowen, sales consultant for Midwest Fire, says his company recently built a specialty vehicle for the Valley Springs (SD) Volunteer Fire Department that has a crew compartment the department uses to keep accident victims out of the elements. “It’s on a Dodge Ram 5500 crew cab with seating for six and is powered by a 6.7-liter Cummins diesel engine,” Bowen says. “It has an all-polypropylene body with an aluminum subframe, an entrance door at the center-rear of the vehicle, a padded bench seat with flip-up storage, and three interior storage compartments with hinged doors.”

Bowen notes that the vehicle is part first response and part rescue truck, so the exterior of the rig has a full-height transverse front locker with a 1,500-pound-rated slide-out tray, a 36-inch-tall compartment over the wheels, and a full-height locker between the wheels on both sides. “It’s not designed as a transport vehicle, and the rear cabin is not to be occupied while the vehicle is in motion,” he says, “but it allows the department to care for a patient out of the elements when necessary.”

Summit built a 750-cfm fan truck with an eight-foot-diameter fan to ventilate large buildings. Messmer says the fan truck, for the Point Pleasant (KY) Fire Department, is on a GMC 5500 chassis.

CustomFire also put together an unusual fire suppression specialty vehicle that Jim Kirvida, president of CustomFIRE, says it originally designed for a nuclear plant customer in Japan. “It’s a roll-off foam delivery device platform that’s available in a skid mount, a pull-behind trailer, and a vehicle mount,” Kirvida says. “It uses a FoamPro Accumax 60-gpm foam injection system for maximum flow of 6,000 gpm at one percent foam concentrate and 2,000 gpm at three percent. The unit has suction hose reels and multiple waterways, allowing each to have a different ratio of foam.”

Kirvida says his company recently built a 30-foot-long command vehicle on a Kenworth chassis for Douglas County, Wisconsin, and a 40-foot-long emergency management fifth-wheel command trailer for the state of Wisconsin that had four slide-outs and could be accessed only from the curb side.