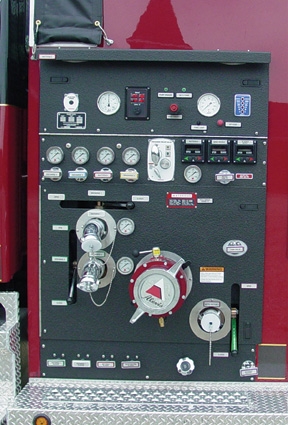 Six years ago the citizens of Ukiah, Calif., passed a tax measure to start a capital equipment account for the municipal Ukiah Fire Department, tying into a department master plan to carry it through the next 20 years.

“The American LaFrance straight stick was always breaking down and had many mechanical and hydraulic problems with it,” said Ukiah’s Captain John Corippo. “It was old and past its usable life, so it needed to be replaced.”

As soon as the capital equipment account had sufficient funds, replacing the old ladder truck became a priority.

“We began the specification process in late 2006 and it became a two-year process for us because we had to make sure the money part of it would work,” Corippo recalled. “When we put the specs out, we got back several bids and had to make a decision as to the quality of truck that we wanted and what we could get for our money.”

The Pierce bid was a bit more than the department wanted to spend. “We decided the truck was the best quality for our money,” he said. “It took some convincing with the city council, but ultimately we showed them that we needed the new aerial in order to do our job better.”

A committee assigned by the chief to write the specifications and review the bids continued its work after Pierce won the bid. Corippo ended up doing much of the legwork necessary and became the de facto contact person to work with Pierce.

Jessica Godina and Jerry Conley are requirements managers at Pierce Manufacturing in Appleton, Wis., who worked with the Ukiah Fire Department.

“The Ukiah people came to Appleton for a preconstruction visit where we talked about the issues that were of concern to them,” Godina said.

One of those issues involved ground ladder storage. “Once they got here, they were able to see a house full of options,” Conley said. “They were able to get an idea of other things that might work for their application. One of the guys said it was like being in a candy store.”

Godina said the 35-foot ground ladder was a three-section version because the shorter wheelbase on the single axle quint wouldn’t accommodate a 35-foot two-section ladder.

A quint, Conley pointed out, is composed of five elements — hose storage, water capacity, storage for 85 feet of ground ladders, a pump and an aerial ladder. The definition is found in Chapter 9 of the 2009 National Fire Protection Association 1901 apparatus standard. “The minimums,” Conley said, “are a pump of at least 1,000 gpm, an aerial device permanently mounted with an installed waterway, equipment storage of 40 cubic feet or more, a minimum of a 300-gallon water tank, ground ladders of 85 feet or more and 30 cubic feet of 2 1/2-inch hose, plus two areas of 3 1/2 cubic feet for 1 1/2-inch or larger preconnected hose.”

He praised members of the Ukiah truck committee for their work with the apparatus sales representative to iron out what they needed before getting into production of the vehicle.

“They had the truck quite well organized at the time of preconstruction,” he said.

Dan Collins, the sales rep from Golden State Fire Apparatus in Modesto, Calif., who sold the quint to Ukiah, said the Northern California area is not as financially flush as it once was when timber cutting was widespread.

“In the fire service today, we see a lot of cuts in staffing and service,” Collins said. “But the folks at Ukiah Fire Department actually involved other neighboring departments, like Ukiah Valley Fire Department and Cal Fire, in the planning for their new aerial, as well as training on the ladder after they took delivery.“

He pointed out that staffing is one of Ukiah Fire Department’s issues.

“With the Pierce quint, they have the ability to provide a master stream and not tie up a piece of apparatus for that alone,” he said. “They can lay from a hydrant to provide water for the master stream and can also use the quint as an attack piece at the same time. Ukiah wanted both offensive and defensive capability on an initial attack, and this one piece of apparatus will allow them to do multiple tasks.”
The Ukiah area also gets a considerable amount of high wind, Collins added, which led the department to lean toward a heavy duty ladder.

“They wanted a heavy ladder that could also allow for a greater water flow,” he said. “Ukiah looked at a multitude of different ladders, both steel and aluminum and their applications, and went with Pierce’s heavy aluminum concept.

The Pierce quint with its 75-foot ladder allows up to a 750-pound tip load.

Once the quint was delivered and Pierce had conducted training sessions, Ukiah firefighters began training on the aerial with neighboring departments.

Eric Singleton, an engineer-paramedic with the Ukiah Fire Department, was part of a group of firefighters Pierce aerial representatives trained.

“It was one day of training with classroom work about the kinds of weight and what we could put on the tip of the ladder,” Singleton said. “The rest was general operation, what to do in emergencies, how to raise and lower the aerial and knowing the bypasses.”

The Pierce quint, which can carry a complement of six firefighters, was used at four structure fires after training, he said.

Almost Sets Itself Up

“Twice we used the quint to gain access into the structure,” he said. “Most of our recent fires have been smaller ones, so we’ve used the new aerial to ventilate, but have not had to use it in a defensive stance yet.”
Singleton noted the aerial is very easy to deploy.

Singleton said he also likes the fact that the ladder tip can be rigged for rope rescues very quickly.

Corippo, Ukiah’s captain, said the quint performed well at a couple of working fires – one at a large sporting goods store in a strip mall and another at a Mexican restaurant.

“That quint was everything we wanted and more,” he said. “While we use it primarily as a truck and a truck rescue company, if we need it, we can also use it as an engine and an attack piece. It’s great to have that capability.”

“This apparatus gives us abilities we didn’t have in the past, because with the pump on it, depending on the situation, we can attack a fire if we need to,” he said. “With our old truck, we could only do truck duties. But with the quint, the officer has the leeway to look at the situation if he’s first in and maybe decide to knock down the fire using the quint as an engine instead of a truck.”

In such a case, the second due apparatus would assume truck company duties and handle ventilation, Corippo said.

“We’re very appreciative that our citizens wanted to see us get more and better equipment,” he added, “This is the first step in doing that, the first fruit of that labor.”

Corippo expects the next apparatus purchase for the department will be an engine.