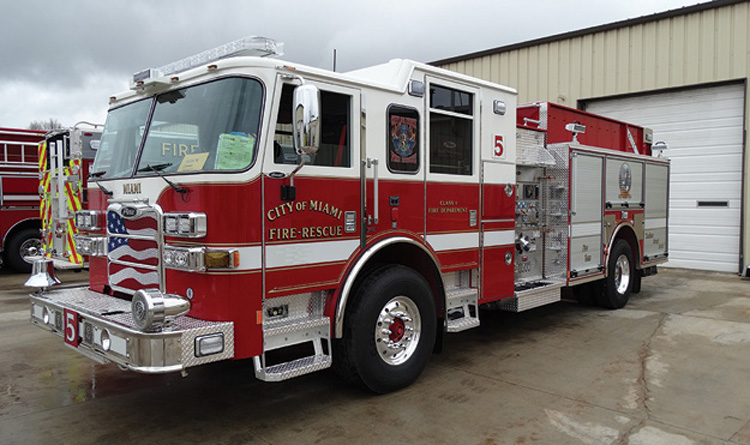 The clean cab concept for fire apparatus is alive and well in Florida, at least for two departments that are making big efforts to keep contaminated turnout gear and equipment away from firefighters and out of apparatus cabs.

The Miami (FL) Fire Rescue Department and the Coral Springs (FL) Fire Department recently took delivery of new Pierce Manufacturing Inc. apparatus that embody the clean cab concept to protect firefighters from potentially contaminated personal protective equipment (PPE) and the assorted tools and equipment they carry with them to a fire scene.

Michael Moore, chief operating officer for Pierce Manufacturing, says the clean cab concept is growing, although how the concept is implemented on apparatus is a little bit different for each department. “As more information gets out there about carcinogens and their link to cancer in firefighters, we’re seeing more interest in the clean cab concept,” Moore says. “Fire departments around the country are adopting policies that suit their operations, and the focus on cancer initiatives is driving these discussions and policy changes.”

While the clean cab concept is not a formal program at Pierce, according to Moore, the company is willing “to develop something different for each department, depending on what they are willing to do and adopt,” he says. 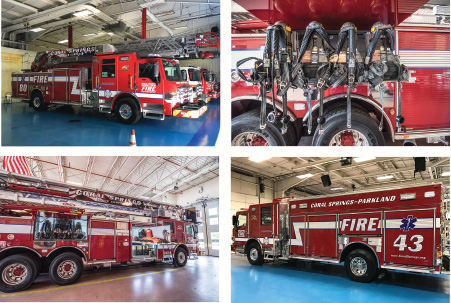 Coral Springs Fire Department Chief Frank Babinec says his department has two Pierce aerials and two Pierce engines that have been designed with the clean cab concept in mind. The two engines are 1,500-gallon-per-minute (gpm) PUC pumpers with 1,000-gallon water tanks, while the aerials are a 107-foot Ascendant PUC ladder quint and a 100-foot aerial platform. “Anything that goes into a fire doesn’t go back into the cab of the vehicle until it is fully decontaminated,” Babinec points out. “We do not have any self-contained breathing apparatus (SCBA), flashlights, thermal imaging cameras (TICs), or irons in the cabs—only turnout gear that has been deconned and washed. We want to keep our cabs as clean as possible.”

The process for the Coral Springs new Pierce Ascendant 107-foot aerial quint, according to Babinec, is the same for the other clean cab vehicles. He says when firefighters come out of a fire, they stay on SCBA air and go to the back of the truck where a decon area has been set up. “Before they come off air, we wash the loose contaminants off their turnout gear and SCBA,” he says. “Then they doff their turnouts, which are bagged and brought back to the station in a vented coffin compartment in the dunnage area of the engines and in a vented hosebed compartment on the aerials.” At the station, where firefighters have a second set of PPE, the used turnouts are washed, extracted, and deconned. SCBA are fully deconned on the scene.

Jose A. Gomez, captain at the Miami Fire Rescue Department, says the clean cab concept came out in Miami as a result of a cancer prevention program at Miami stations. “Our apparatus bays have scrubbing and air filtration systems,” Gomez says, “and positive pressure in the living areas of the station. All turnout gear wire mesh lockers are in an outside area room with a separate ventilation system. For every major incident, turnouts are sent out for washing and extraction, and we do a yearly body scan on each of our firefighters.”

Gomez says when Miami spec’d its new pumper, an Arrow XT with a Waterous CSU 1,500-gpm single-stage pump, and a 500-gallon water tank, the spec committee conferred with Pierce engineers about how to make the clean cab concept work for them. Gomez says the cab is set up for four firefighters, with the two seats in the crew area facing forward. Built into the back wall are positive and negative ventilation cabinets for turnouts and equipment that’s contaminated, while the officer and driver have cabinets accessible from the outside and built behind the rear cab wall that hold two sets of PPE, SCBA in brackets, helmets, a rapid intervention team bag, bulletproof vests for active shooter scenes, and “anything that can potentially go into a fire scene,” according to Gomez. 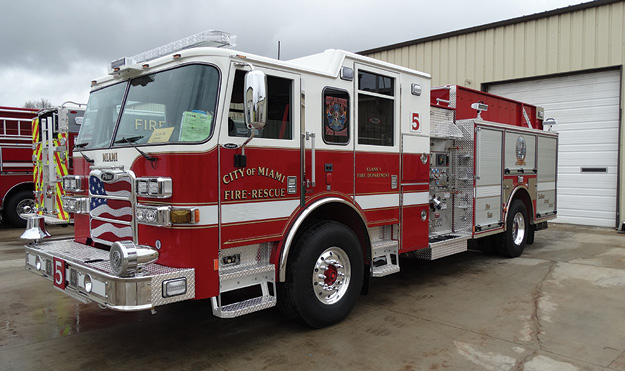 Depending on the type of call, firefighter turnout gear and equipment are either deconned at the scene or, if highly contaminated, the equipment is returned to the station to get a full cleaning while the PPE is bagged and brought to the station to be picked up by a third-party vendor for washing, extraction, and decon. “This is the fourth Pierce vehicle that we’ve set up this way, and they are working great in our program,” Gomez points out. “We had two Pierce pumpers built in 2016, another pumper in 2017, and a 75-foot Pierce quint the same year. We intend to continue this clean cab concept for our whole fleet, and it will be incorporated in all our new apparatus.”

Michael Schneider, sales rep for the Southeast region at Ten-8 Fire Equipment, who sold the vehicles to Coral Springs and Miami, says both departments are passionate about the clean cab concept to protect their firefighters. “The goal is to eliminate as much contamination from apparatus cabs as possible,” Schneider says, “even to the point of eliminating hand lights and other tools from the cabs.” It’s not that difficult to accomplish, he adds, pointing out that in Coral Springs, the department uses two different colored handlights—one for use in the cab and the other color for only outside-the-cab use. 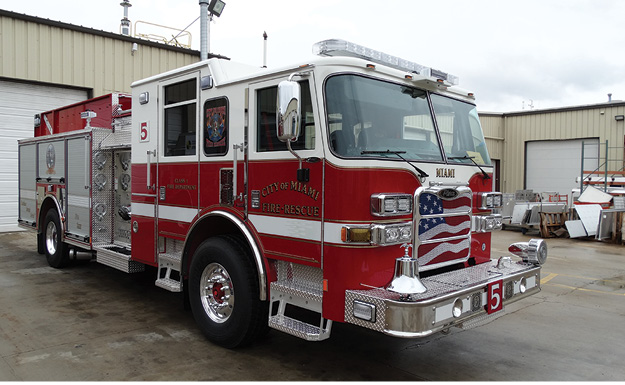 6 SCBA and other equipment on the Miami Arrow XT pumper are carried in cabinets behind the cab’s rear wall in an effort to keep the cab clear of potential contamination.

Babinec notes that his department also has a glove and hood swap program. “The firefighters on a fire scene get a clean set of gloves and a clean hood issued to them,” he says, “while the contaminated gloves and hoods get bagged and taken out for decon by a third-party vendor. We’re even taking our reserve fleet apparatus and refurbishing their interiors to the clean cab concept, removing SCBAs and hand equipment from the cabs and configuring the vehicles for decon services.”

SCBA on the engines are on slide-out trays, Babinec says, along with TICs, irons, and hand lights. On aerials, the SCBA and equipment are fixed to the back wall of a compartment. “All seats face forward on our vehicles, and firefighters like the fact they can step off the truck without extra weight on their backs,” he says. “We’ve found we have fewer back, ankle, and knee injuries, and officers are having a little extra time to look at a scene and do a better evaluation while they are donning their SCBA.”

Service area: The Coral Springs (FL) Fire Department provides fire suppression and mitigation, rescue, a dive team, and emergency medical services to the 40-square-mile city of Coral Springs with a population of 260,000 people.

Other apparatus: Six engines, one quint, one aerial platform, one Squrt, seven ambulances, one water tender (tanker), one dive unit, and one support unit.

• One 1¾-inch hoseline in covered tray in extended front bumper

• Two 2½-inch discharges at the rear

• Impel chassis and cab with seating for four firefighters

• Two 2½-inch discharges, one each side of body