BOLZANO, ITALY—The EmiControls solution for fire and smoke control by combining optimum water atomization is the TAF20, a highly efficient turbine mounted on an easily maneuverable tracked vehicle. The turbine can atomize large quantities of water to a fine mist. This generates a larger surface area of water for a greater cooling effect and it is reportedly more efficient than conventional fire monitors at dispersing the smoke and soot particles during firefighting. The mist stays in the air longer than larger drops of water. It can smother burning objects and can therefore also access parts of the fire source which are out of reach to a conventional extinguisher jet. The turbine is suitable for use with extinguishing foam and flame inhibitors. The turbine is also suitable for ventilation.

A suitable base has also been developed by EmiControls to exploit the advantages of the turbine. It is an easily maneuverable tracked vehicle on which the turbine can be lifted to a height of up to four meters. The vehicle can also be rotated 360 degrees and the angle of the turbine inclined from -20 degrees to +50 degrees. Up to 3,500 l/min water can be atomized to an effective spray and targeted precisely at the source of the fire. The TAF20 can be fully operated by remote control with graphic display. 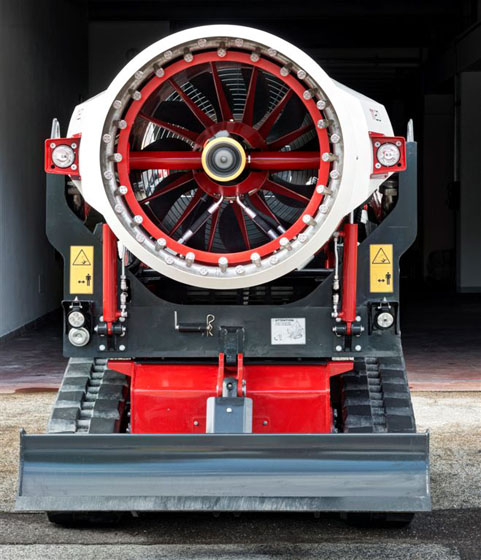 This brings added versatility for many fields of application. The active binding of the soot particles and the high efficiency of the fan have proven particularly advantageous in tunnel fires. In such cases, the TAF20 is sent by remote control into the tunnel ahead of the firefighting crew who can follow at a safe distance. The large surface area of water gives the product enormous potential for use in industrial plants also. The flames are reportedly knocked down quicker and, at the same time reducing the required quantity of water. The disposal of the water used for extinguishing is a major cost factor, especially in the chemical industry. In urban areas the damage caused by the firefighting water can be minimized due to the reduced quantity of water. The high cooling capacity and the reduction of smoke and soot emissions bring significant advantages for neighboring residents and firefighting crews.

The effectiveness of turbine aided firefighting (TAF) system has been confirmed in many different tests conducted by reputable institutes. The tests were carried out at various places by a range of bodies, such as the Saxony-Anhalt Fire Services Institute, the MPA Dresden, the MOL Refinery, and TST Tunnel Safety Testing. The following advantages over conventional fire monitors were identified during the tests: