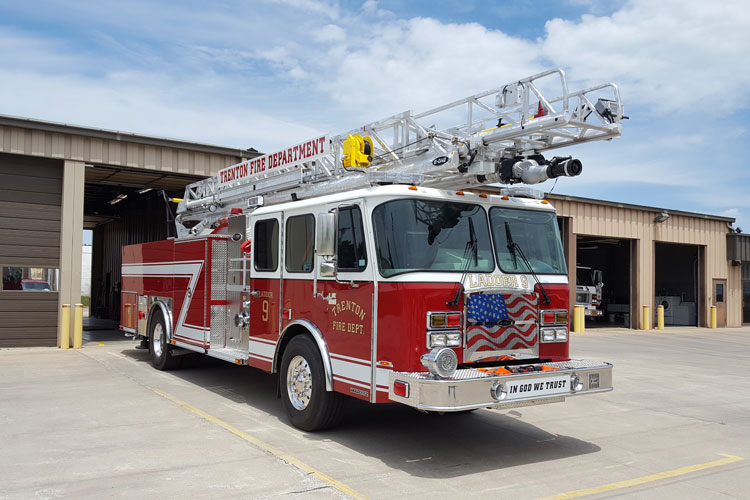 The Trenton (MO) Fire Department wanted to replace an old 100-foot aerial platform with a solid, late-model, used 75-foot aerial quint, so the department turned to used apparatus experts Jon’s Mid America Fire Apparatus to seek the right used truck for them,at the right price. But, Jim Keltner, the owner of Jon’s Mid America and also an E-ONE dealer, says he couldn’t find a used 75-footer in the age and price range specified by Trenton, so he recommended the department check out a new 75-foot aerial quint that E-ONE had on its production line.

“I knew E-ONE had a demo unit in production, so we brought the Trenton guys down to Ocala (Florida) and gave them an opportunity to get a good look at the truck because it was at the stage where it only needed finishing work, so that gave them a pretty good visual,” Keltner says. “They liked what they saw, bought the truck, and E-ONE pulled it off of production to do some modifications that Trenton wanted.” Those changes included a 500-gallon water tank, instead of a 300-gallon tank, a hose well and discharge for a 1¾-inch hoseline in the front bumper, the addition of a Federal Q2B mechanical siren, an LED brow light, and pull-out trays and tool boards in some of the cabinets. 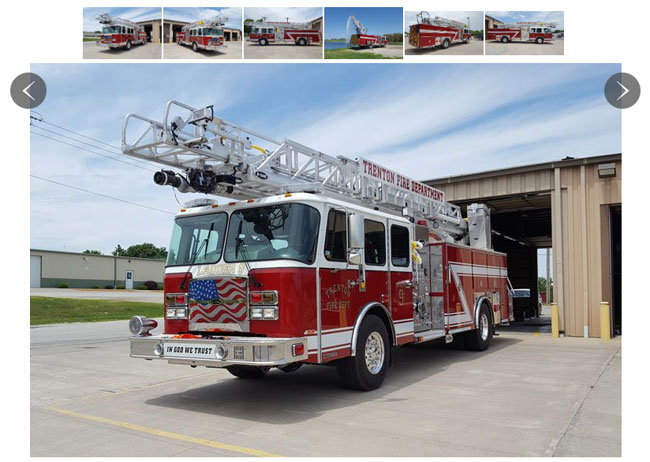 Brandon Gibler, Trenton’s chief, says the department was running a 1984 LTI 100-foot aerial platform on twin rear axles and with a 49-foot overall length. “We have a lot of narrow streets and places where that truck couldn’t get to,” Gibler points out. “Plus, we also had difficulty finding parts to keep the truck in service and pass its ladder tests. We spent a lot of money on it over the last five or six years to get it to pass its ladder and pump tests, so we decided to look for a good, used single-rear-axle 75-foot aerial quint that we could use for 15 to 20 years. After a year-long search, we couldn’t find a used truck, so we decided to go with the new E-ONE quint.”

Keltner says the vehicle Trenton purchased is on a 2018 E-ONE Typhoon chassis and cab powered by a 450-hpr Cummins ISL9 engine and an Allison 3000 EVS automatic transmission. The quint has a 75-foot aluminum ladder, a Waterous 1,500-gpm pump, a 500-gallon water tank, a 20-gallon foam tank, and a Hale FoamLogix foam system that runs to three preconnected cross lays (two 1¾-inch and one 2½-inch), one side 2½-inch discharge, and the front bumper discharge.

Gibler notes that the new quint can accommodate six firefighters in the cab, has 12-volt LED scene lighting, and a hosebed that carries 800 feet of 5-inch LDH and 400 feet of three-inch hose. “We needed a shorter wheelbase truck on a single rear axle, and this E-ONE quint is perfect for us,” he says. “We especially like the aluminum ladder for its weight reduction, which puts less stress on the vehicle and its components as well as on the roads and bridges in the district.”

Rurally Speaking: PPE for your PPE?