The heritage of today’s tractor-drawn aerials (TDAs) can be traced back to the late 1800s when the trailers were first given rear steering but were still drawn by horses. Horsepower (hp) today still powers TDAs but in an engine-driven form, yet TDAs, also known as tillers, retain their advantages of maneuverability, versatility, and equipment-carrying capacity.

Paul Christiansen, aerial sales manager for Ferrara Fire Apparatus, says that an aerial’s maneuverability “is more important than ever before, especially where a lot of new development is in apartment complexes and downtown commercial areas where buildings are tightly packed. The maneuverability of a TDA is so much better, especially in making tight turns, than compared with a nontiller truck.”

Pete Hoherchak, product manager of aerials for KME, agrees that maneuverability is the number one advantage in using a TDA, followed by the ability to carry a large amount of ground ladders and having lots of compartmentation. “You are able to get the truck down tight streets and alleys and into tight fire scenes where you wouldn’t be able to get a rear-mount aerial,” Hoherchak observes. 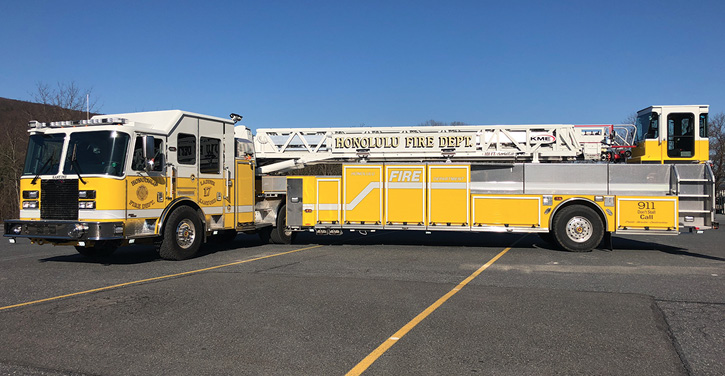 He notes that a TDA tractor without a pump or water tank has a wheelbase of 141 inches. “Wherever the tractor can go, the trailer can follow,” Hoherchak says. And when setting up in tight spaces, the width of the jack spread is important, he says, citing KME’s 14-foot jack spread on its TDAs.

Hoherchak adds that because a TDA’s ladder turntable is in the middle of the truck, the vehicle can be jackknifed to position it, which gives the TDA a reach advantage over a similarly-sized rear-mount aerial ladder since the TDA’s turntable would be closer to the building. And by jackknifing a TDA, an operator can get to a lower elevation, which gives a greater reach at low angles.

Because of the trailer design, a TDA can carry a lot of ground ladders, Christiansen adds. “There are a lot of options for the total amount of equipment that can be carried on a TDA,” he says, “greatly in excess of 200 feet of ground ladders, along with other equipment. The San Francisco tiller even is carrying a 50-foot extension ladder on it.”

Dave Reichman, national sales manager for Rosenbauer, says Rosenbauer makes a 100-foot TDA in several forms: as a quiller, which is a tiller with a pump and water tank, or as a straight tiller with no waterway; single-axle tractor tillers; and tandem-axle tractor tillers along with two tiller cab heights. “Using our Commander chassis, the tiller can have a raised roof,” Reichman says, “and if the department wants the shortest TDA possible, we can do it on a single-axle tractor to shorten the overall length. “We also have built TDAs on commercial Freightliner chassis.”

3 The Baltimore County (MD) Fire Department had Rosenbauer build this 100-foot tiller on a Commander chassis. (Photo courtesy of Rosenbauer.)

Brandon Whittaker, Rosenbauer’s aerial sales manager, points out that Rosenbauer’s TDAs use a four-section steel ladder, and that most of the TDAs it builds have prepiped waterways with pinnable monitors that won’t impede rescue work. “Our TDAs are equipped with SMART aerial controls that prevent the tiller cab and body from being struck by the aerial and allow the truck to be short jacked and personnel to safely work on the short-jack side with the vehicle’s 500-pound tip load, wet or dry,” Whittaker says.

Rosenbauer’s TDAs have two jacks placed near the aerial’s rotation point with a jack spread of 15 feet 6 inches. The jacks are offered in the traditional H-style as well as an A-H-style jack that comes straight out from the body and then angles to the ground at 45o. Rosenbauer also redesigned its tiller cab to meet the National Fire Protection Association’s changed requirements for impact and crush testing, Whittaker adds. “We also have a dash information screen in the tiller cab as standard that shows alignment of the rear steer tires, open doors, directional on, parking brake on, and all the J1939 information from the engine,” he says.

Regarding tiller cabs, Hoherchak points out a tiller cab must be well designed to allow for maximum visibility by the tillerman. He says that KME has eliminated the A posts in the corner of its tiller cab by using bonded glass so the tillerman has a better view to the front and side of the tiller cab to observe street markers, pavement lines, and parked cars.

Tim Smits, senior sales manager for aerial products at Pierce Manufacturing, says Pierce makes a TDA as part of its Ascendant® class of aerials, with a 107-foot ladder height, 100 feet of horizontal reach, a 750-pound tip load dry and 500 pounds wet, with the ladder made of heavy-duty 100,000-pound-per-square-inch steel. “By putting the TDA on an Ascendant, we were able to drop 4,000 pounds from our previous style tiller,” Smits says. “The torque box alone is 2,000 pounds lighter, and there’s greater compartmentation on the vehicle.”

Smits notes that Pierce will make the TDA as a straight tiller and also as a quint tiller with a pump and water tank. “About 80 percent of the straight TDAs we build have a preplumbed waterway,” he notes, “but there are still departments out there that don’t want a waterway on their tiller.” Smits points out the Pierce TDA uses a TAK 4 independent rear tiller axle as standard and can operate at -10o below grade and +77o vertically with only two jacks that have a 17-foot jack spread. “The big thing on our TDAs is the jackknife angle can be up to 60o, which allows the operator to push the turntable as close to the structure as possible to give maximum reach,” Smits says, “and the TDA can run at full capacity at that angle.”