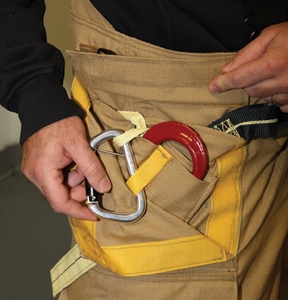 ReconRobotics has introduced a throwable, miniature device that can roam through a structure and send back live video reconnaissance.

The one-pound Recon Scout Rescue can be directed by a firefighter to move through an environment and transmit real-time video back to a handheld operator-control unit. This video can be used to locate victims, explosive devices or other hazardous materials.

The Recon Scout Rescue is a variant of the company’s micro-devices built for the U.S. military and federal agencies. Deploying the unit takes 10 seconds, and its use requires no special training, according to the company. A firefighter pulls the activation pin and throws the device through a doorway or over a wall, or drops it down a vertical shaft using a tether, the company said.

The Rescue sees in darkness and transmits video up to 100 feet indoors and 300 feet outdoors. Its movements are directed through use of a joystick.

ReconRobotics was formed in 2006 to commercialize robotics technology developed at the University of Minnesota. For information, go to www.recon-scout.com/rescue.