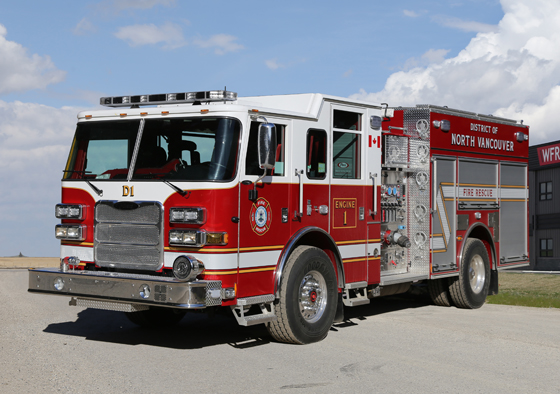 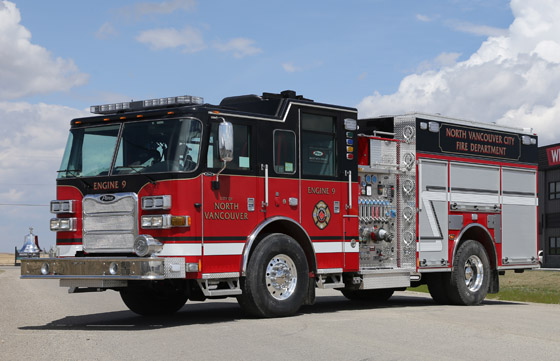 Three Vancouver-area fire departments recently got together and drew up specs for side-mount pumpers that would meet the needs of each department, have commonality for mutual aid situations, and still be customizable for each of their special needs.

“I organized the group with a chief officer from each district, a rep from each mechanical division, and reps from our purchasing departments,” Pistilli says. “We have an automatic mutual aid situation set up for the three departments and are busy. We run 4,300 calls a year out of one station. West has four stations, and District has five, each with a similar number of calls.”

Pistilli says the area covered by the districts rises from sea level to 1,200 feet elevation, so they needed robust engines, but the overall length of the vehicles was a consideration too because the area has a lot of traffic-calming roundabouts which limit maneuverability.

“The purchasing department put out a relatively generic spec that allowed everyone to bid who wanted to,” he points out. “We received five bids and interviewed them. Pierce won the bid for the three pumpers.”

Hiba Hodges, president of WFR Wholesale Fire & Rescue Ltd., the Pierce dealer for six western Canada provinces, says after being awarded the contract, she sat down with representatives from the departments to determine what differences the pumpers might have. “We knew they wanted to standardize because they operate together but also had their own unique needs,” Hodges says. “We had quite a few meetings with the group, constantly compromising and adjusting, but still keeping up our standards.”

The resulting custom pumper is a Pierce Arrow XT side-mount on a four-door chassis with a 10-inch raised roof and seating for five firefighters—six for the West Vancouver rig. The pumper has a 189-inch wheelbase, a 46,800-pound gross vehicle weight rating (GVWR), a 22,800-pound TAK-4 front axle and a 24,000-pound rear axle. 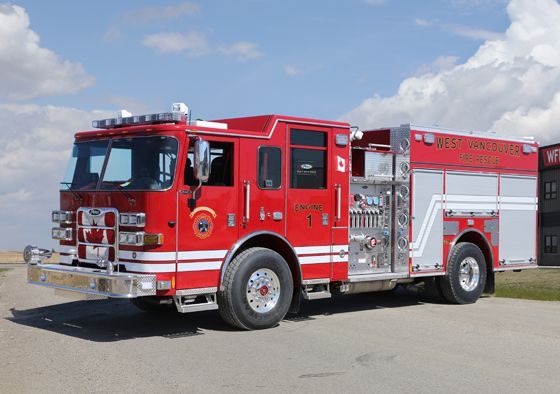 Pistilli notes that each department tweaked the equipment included on its pumper beyond the basic design platform. “Each one was set up as a separate job,” he says. “While the physical size of the pumpers and their main equipment are all the same, there are some differences, such as the Will-Burt Night Scan Chief light tower, built-in EMS cabinets in the cab, and a Task Force Tips Monsoon monitor and MasterStream electric nozzle on our pumper.”

Cost of the North Vancouver City pumper was $590,000, Pistilli says.

Hodges, who is the only female president of a fire truck wholesaler in Canada and has been with WFR for eight years, says the Vancouver purchase was the first time she had sold three vehicles to three departments at the same time. “It was an enjoyable process,” Hodges points out. “Initially I was worried about keeping up our customer satisfaction rates working with three departments at the same time, but we were able to give them exactly what they wanted.”

What Does a Fire Department Do?