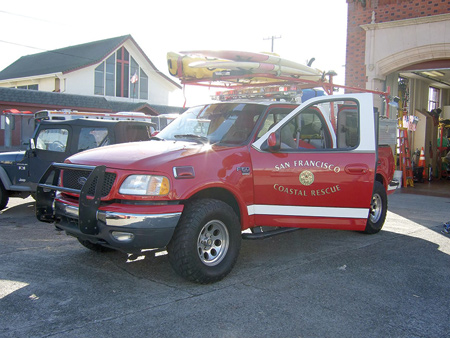 In August 2002, CR1 had the name “Cliff Rescue” before being relabeled “Coastal Rescue” in gold lettering on the doors and tailgate. The name change occurred because a “cliff rescue” could easily turn into a “surf rescue” if the victim falls into the water from the numerous rocks, cliffs, and bluffs lining the San Francisco coast. Nonetheless, CR1 still carries more cliff and mountain rappelling equipment than CR2. Outwardly, both pickups appear as exact duplicates with similar functions. However, CR1 has unique differences compared to CR2 that make CR1 more suited for the cliff rescues as designated by SFFD.

The tires and side running boards comprise the main difference in appearance and functionality. CR2 rolls on Goodyear™ Wrangler AT/S™ tires with conventional wheel hubs and tire stems. CR1 rolls on Mickey Thompson™ Baja Claw™ tires with custom steel hubs and tire deflation stems. CR1’s wider Baja Claws™ have more aggressive tread patterns for better traction off road, on park trails, and in the sand. Ideal for operating in the sand, the Baja Claws also distribute the pickup’s weight better through its aggressive tread pattern. Furthermore, CR1’s wheel hubs have larger round holes in them to allow looping and tying of rescue ropes directly to the wheels to serve as side wheel anchors, a feature CR2 does not have. CR1 also has tubular side running pipes under the doors to allow for inserting and looping rescue ropes onto the side anchors. CR2 has conventional manufacturer-stock flat-panel running boards.

CR1’s large area of responsibility includes Fort Funston, the southwest corner of San Francisco and known for its steep sandy cliffs; Ocean Beach, famous for its deadly rip currents; Fort Point, Baker Beach, with cliffs and beach; Land’s End, with cliffs, rocks, and surf; the Presidio, with cliffs and surf; and other cliffs, hills, and buildings within city limits. For years, CR1 and CR2 were the only coastal rescue crews in San Francisco because none of the beaches had any lifeguards on duty. That all changed when Ocean Beach became part of the Golden Gate National Park system several years ago, and the National Park Service (NPS) stationed two white pickups, each one with two lifeguards inside, on daytime duty at Ocean Beach. However, even the NPS’s lifeguards’ advice to waders to not go too far into the water has not diminished the number of rescue calls for CR1.

Station 34 firefighters state that they could go for weeks without one coastal rescue call to as many as three or more coastal rescue calls in one day. Most CR1 deployments occur during the day when people visit the beach, although there have been times when CR1 deployed in the dark of morning-for example, one incident occurring at three o’clock in the morning when a fishing boat washed ashore on Ocean Beach.2

The coastal rescue pickups sport the classic SFFD two-tone paint scheme with a glossy white upper half and roof and a glossy red bottom half. Gold lettering and the SFFD logo emblazon each door and the tailgate. A broad reflective white stripe graces the bottom of the trucks. A red flasher adorns each fender, while the tailgate has an amber flasher on the left side and a red flasher on the right side. Each pickup has a Code 3 MX-7000™ red and white flasher lightbar over the cab. CR1 contains equipment suited for both cliff and surf rescues.

Inside the two-door extended cab, a metal three-shelf equipment rack replaces the backseat. The cab’s equipment rack contains some of the most essential tools for coastal rescue: about five bags containing ropes of varying lengths for the main rescue rope and the secondary safety (belay) rope leading to the victim; helmets; pickets/ground stakes; a sledgehammer for pounding in pickets; rackbar, pulleys, and mariners (RPMs); binoculars; gloves; red duct tape; and tire deflators. CR1 carries a red duffle bag with 600 feet of rope-a specialty of the coastal pickups, since no other SFFD ladder truck or pumper carries that many feet of rope.

On each side below the cab is a side anchor point, essentially a painted white steel eyelet, for tying rescue ropes. Another anchor point rests on the rear chrome bumper by the license plate. Two additional forward anchor points (black U-shaped bars) are embedded in the front bumper next to the bumper’s fog lights. Ropes can also be looped and tied to the wheels’ rims to serve as additional side anchors. However, rescue ropes never get tied to the front black push-bumper.

The vehicle’s anchor points provide a stable and readily available point for anchoring rope anywhere instead of having to seek out and tie the ropes to nearby trees. Firefighters can also pound pickets into the ground with a sledgehammer if the pickup and nearby trees are not available as anchor points.

Wetsuits, booties, and fins normally get carried in bags on Engine 34 or left hanging at the fire station. If the emergency is a surf rescue, Station 34 firefighters may put on their wetsuits and fins in the station and get into CR1 or carry the wetsuits and fin bags in CR1, dressing in the pickup’s cargo bed once at the scene.

The driver-side utility boxes contain a flashlight, common gathering plates (essentially a zippered pouch with straps, pulleys, carabiners, D-rings, and cords), harnesses, a Z-Rig 3:1 hauling system, maps of the geographical area, medical bags, tarps, two fin belts, and a blanket. Everything is labeled with marker pen for easy identification and retrieval at the incident scene.

The passenger side utility boxes contain a low-angle Stokes basket, body bags, flashlight, edge protection device, strobe lights and parachute flares for nighttime operations, and low-angle and high-angle equipment bags. In a cliff rescue, firefighters use the low-angle bag if they can walk down to the victim-usually on a slope-and use the high-angle bag if they cannot walk down to the victim, such as a vertical rappel down a sheer cliff. These two bags contain gear that connects directly to the Stokes basket for hauling a victim up a slope or cliff. Here, too, everything is labeled with marker pen for easy identification and retrieval. CR1 also carries tripod-mounted portable lights for on-scene illumination away from the vehicle.

A red steel rack over the bed and a steel mesh shelf over the cab allow carrying two surfboards, a floatable Stokes basket for water rescue, and three body boards. Hand-adjustable spotlights and flashers are mounted at the rear corners of the rack for illumination.

Station 34 firefighters often step into CR1’s empty cargo bed to put on their wetsuits and fins and to retrieve the boards and Petersons, but the firefighters place shovels and a sand anchor here if the emergency involves a beach sand rescue. CR1 crews use a sand anchor if the pickup gets stuck in the sand. The sand anchor gets tossed out, and the pickup is winched out.5

Station 34 firefighters’ mission is to rescue water victims. So, CR1 does not carry self-contained underwater breathing apparatus tanks because they are mostly needed for body recovery and retrieval operations. CR1 also does not carry thermal imaging cameras because Station 34 firefighters usually rely on the Coast Guard helicopter’s powerful spotlight for nighttime illumination.

CR1 used to have a winch mounted on the frontal push-bar rated at 4.8 hp with a 100-foot wire rope rated at 8,000 pounds of single-line pull, but this was removed after it broke.6 To improve traction for driving on the sand, the CR1 firefighter stops the vehicle, gets out, and installs the four tire deflation valves into the stems to lower the pressure to 14 pounds per square inch. After the rescue, the driver slowly and carefully drives CR1 back to Station 34, since riding on deflated tires may pose a driving hazard. The tires get reinflated at the firehouse.

Station 34 firefighters give CR1 high praise for its performance and functionality. The small size, four-wheel drive, and ability to deflate the tire pressure allow CR1 to drive on narrow park trails and beach sand with ease, ensuring that it gets as close to the scene and to the victim as possible, something that the larger SFFD pumpers, ambulances, and ladder trucks cannot do. The fabricated anchor points and purposely designed wheel hubs allow for attaching rescue ropes securely all around the vehicle for cliff rescues. CR1 also carries enough surf and land rescue gear for its two firefighters in addition to providing nighttime illumination at the scene either from the vehicle or remotely with portable lights. CR1 and CR2 contain most of SFFD’s specialized cliff and surf rescue equipment and are the “go-to” vehicles for any coastal rescue emergencies.7 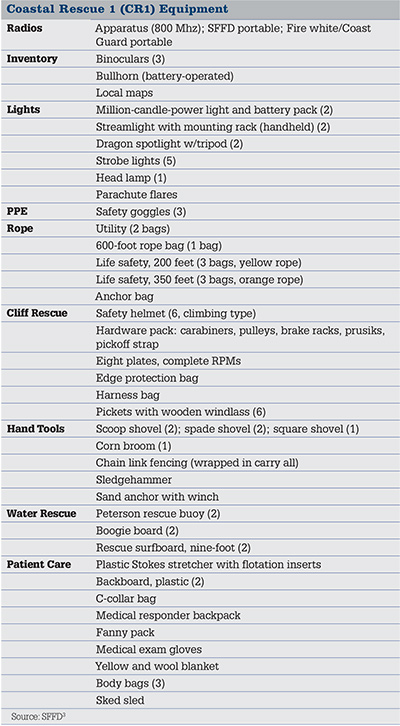 2. In person and phone interviews with Station 34 firefighters on duty, November 2014.

5. In person and phone interviews with Station 34 firefighters on duty, November 2014.

7. In person and phone interviews with Station 34 firefighters on duty, November 2014.

Author’s note: Special thanks to the SFFD Public Affairs Department.

Editorial on Use of New York Fire Apparatus for Wedding Proposal