Located in the heart of Amish country in Lancaster County, Pennsylvania, is the town of Intercourse. The town itself was founded in 1754 and was originally called Cross Keys after a local tavern located in town.

In 1814, the town was officially named Intercourse, and there are a number of theories on the town’s renaming and the reasoning for the name choice. The theory I like is the use of language during that period that commonly described “intercourse” as friendship, social interaction, and support showed in the community of faith.

After being introduced to this department through my friend Larry Schultz and getting to deliver a number of classes to the department and the area in general, without hesitation I can honestly say that the true meaning of friendship is displayed by every member of the department to anyone who visits. It has the true community values of the volunteer fire department where I grew up in Ocean City, Maryland. Their dedication to the community, their neighbors, and the protection of not only Intercourse but the entire county is something that is from a “service before self” mentality—something that is becoming harder and harder to find in the fire service today. 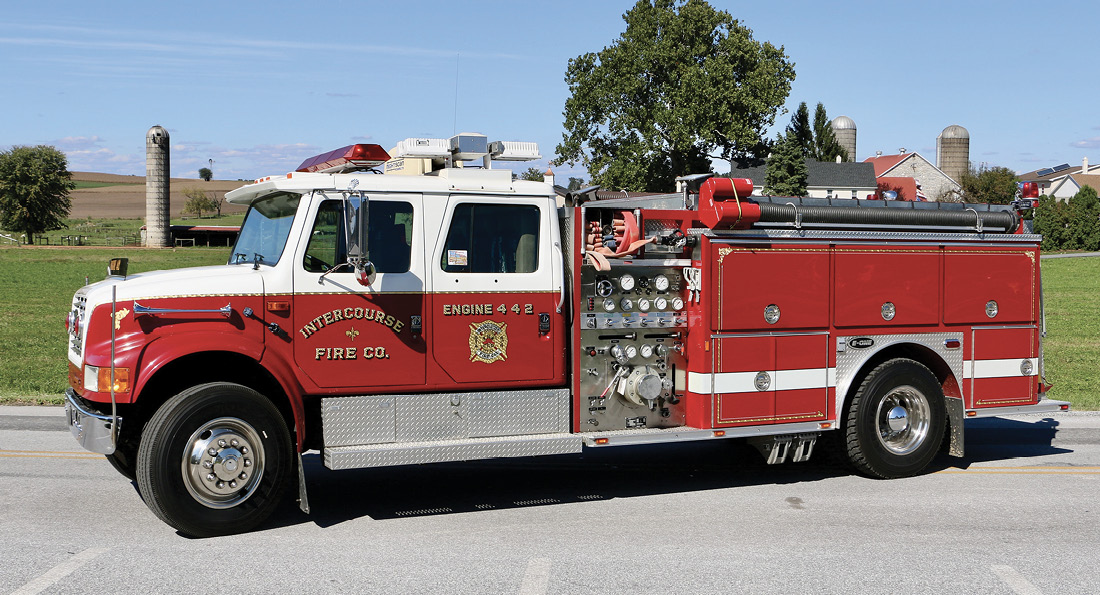 2 Engine 442, an E-ONE/International Navistar 4000 Series, has a five-person cab and 1,250-gpm pump and carries 1,000 gallons of water. This rig will soon be replaced with a preowned pumper purchased from Brindlee Mountain Fire Apparatus. 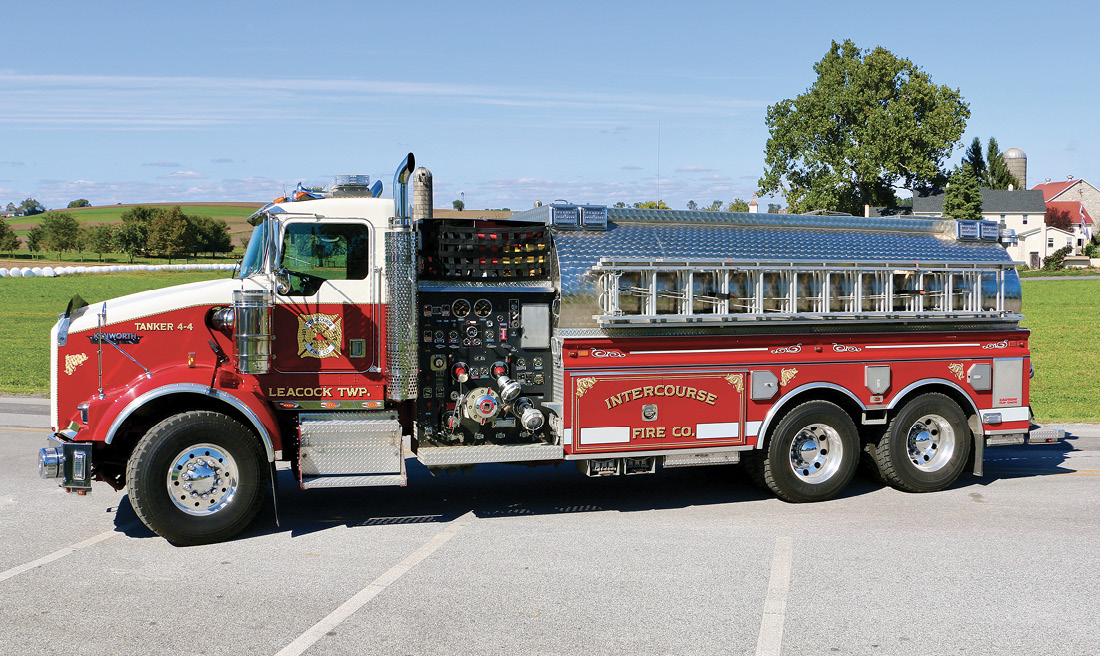 Another astonishing aspect of this department is the tremendous amount of time and effort that goes into fundraising. They must take this course so they can purchase every piece of equipment and gear from the apparatus to the Nomex® hoods—something many firefighters and departments take for granted. It is an effort and dedication to their community and department that many of us in the fire service do not understand or get to experience. The countless uncompensated hours that they put into their organization is astounding. Sure, they can take time away from family at some point, but at most of these fundraising events the members are accompanied by their families, with everyone pitching in regardless of age to contribute to the effort. My admiration of their time devoted to their department so they can provide the apparatus and tools to protect their community is unsurpassed.

On January 31, 1911, the community identified the need to provide fire protection for the town and its surrounding areas. During this meeting, the volunteer fire company was formed, and the initial fundraising started to purchase two chemical engines. The department ordered its first rigs: two 45-gallon Oberchain & Boyer chemical engines, from Sprecher & Ganse, Lancaster, Pennsylvania, at the cost of $486.61 plus $13.39 for shipping. Unfortunately, before the rigs could be delivered, the barn at the home of John Burkey on S. Queen Street was destroyed by fire. From that day forward, the volunteers have been delivering service to their community with a very high standard set for training and their apparatus.

The department has had a number of interesting rigs throughout its history, including the following:

The department’s current fire apparatus are well designed for their response area and are possible because of the the many hours of fundraising the department does each year.

While I wrote this article, the department was in the process of purchasing a used piece of apparatus to replace Engine 442. In early October 2020, the department purchased a used Pierce Arrow XT engine from Brindlee Mountain Fire Apparatus. The apparatus committee traveled to Brindlee and completed a full mechanical assessment of the rig, which it passed with flying colors. This unit has a 750-gallon water tank and a 1,500-gpm Hale Qmax fire pump and is powered by a Detroit DD13 525-hp engine. We will do some follow-up pictures when the unit is received and placed in service. But, I am assured that it will be painted their company colors of black over red.

4 Squad 44 carries a variety of support tools and equipment for the fireground and can seat 13 firefighters. It is a 1999 Marion Body Works rig built on an International cab and chassis. 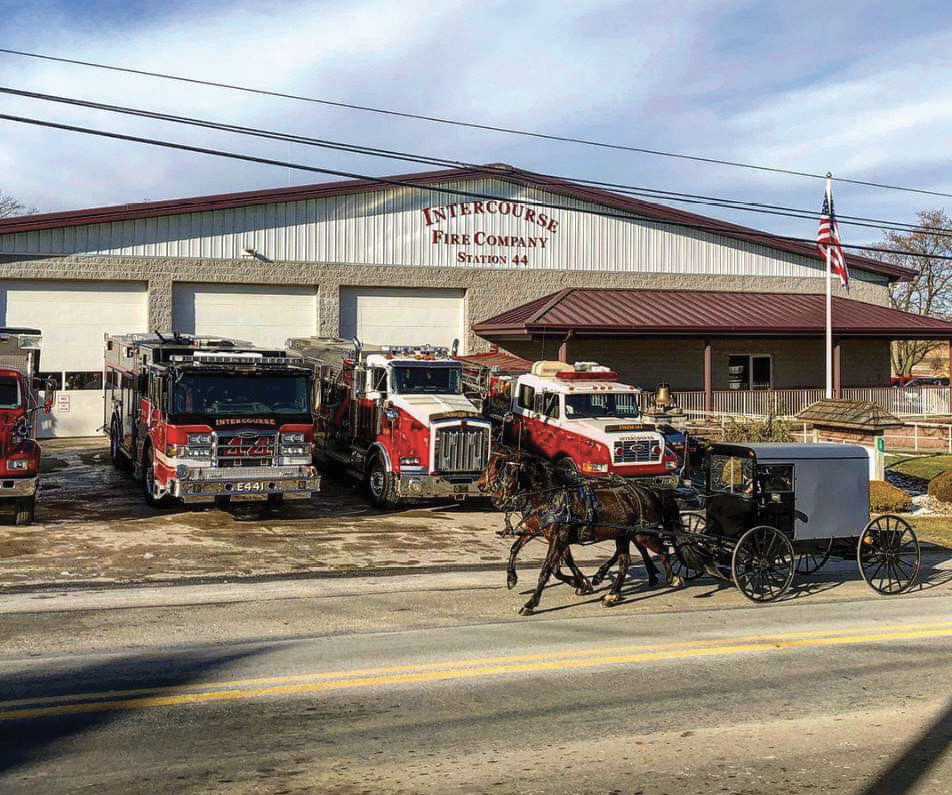 While highlighting this department, it was an honor to meet and engage with many members who are part of the Amish community and who are extremely active with the Intercourse Volunteer Fire Company. They have a sense of community pride, department pride, and unwavering respect for their fellow firefighters and neighbors. In the short time I have known the firefighters from Intercourse, they have taught me so much about being a good person, the importance of friendships, and above all else reminded me about the real meaning of service above self. They certainly set the standard high for volunteer fire departments and what their true value is to a community.

Assistance for this article was supplied by Elmer Stoltzfus through many conversations and supplying me with the history of the Intercourse Fire Company. Nate King was gracious enough to pull all the rigs out for the photographs, even while helping with a company fundraising event the same day.

If you are ever in the Lancaster, Pennsylvania, region, check in at the firehouse, see if they are having one of their many fundraisers, and stop by to support the department and the community. You will be rewarded by meeting some of the best people in the world and some firefighters I am privileged enough to call friends.

RICKY RILEY is the president of Traditions Training, LLC. He previously served as the operations chief for Clearwater (FL) Fire & Rescue and as a firefighter for Fairfax County (VA) Fire & Rescue. He also currently serves as a firefighter with the Kentland (MD) Volunteer Fire Department. He also is a member of the Fire Apparatus & Emergency Equipment Editorial Advisory Board.