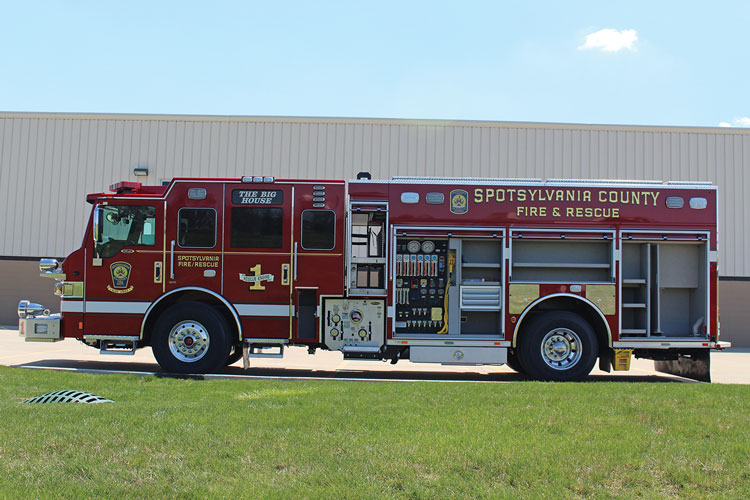 With fire departments trying to cram as much equipment on their pumpers as possible, manufacturers have responded by shrinking pump panels and relocating pumps and discharges on fire apparatus to give firefighters the room they want and need on their vehicles.

A large part of the efforts by apparatus and pump manufacturers has been to shrink pump panels and their associated equipment to free up space for other uses.

John Schultz, director of pumper and custom chassis products for Pierce Manufacturing Inc., says Pierce’s PUC product line has continued in popularity, likely because of the slim size of the pump house and panel area. “The pump is located between the frame rails, which allows crosslays to come down from their historically high location on top of the pump house,” Schultz says. “The 31-inch-wide PUC pump panel is on the driver’s side only, allowing additional compartmentation on the officer’s side and saving wheelbase on the vehicle. Because of this, we are able to replace the officer’s side panel with a full-height-and-depth compartment.”

On the traditional custom pumpers that Pierce builds, Schultz notes that Pierce is achieving pump panel savings by using end suction pumps over traditional full body midship pumps. “The intake and discharge manifolding is typically cast by the OEM body building, which allows for a unique configuration of intake manifolding,” Schultz says. “The reconfiguration saves space by being more compact, as is shown in our FXP entry-level commercial pumper with a 45-inch-wide pump panel.”

Some departments are opting for smaller hydraulically-driven pumps packed in or underneath a transverse compartment or the pump compartment, Schultz says. “Typically we see them on aerials where the pump would be 250 to 300 gallons per minute (gpm) and might feed a front bumper crosslay or other discharges,” he adds. “The small pump panel controls would be under the transverse compartment, tucked away. The San Diego (CA) Fire Department has used that type of pump with a 10-inch-wide pump panel and electric valve controllers and gauges for quite a while now.”

Grady North, product manager for E-ONE, says his company’s eMAX pumper has become a very popular option among fire departments, so much so that E-ONE expanded the product to include aerials and tankers as well as top and sidemount pumpers. “We wanted to shrink the pump panel and get more usable compartment space, so our engineers grouped suctions, discharges, and preconnects into an area no wider than traditional crosslays and vertically integrated the pump controls so they don’t spread out in width,” North points out. “The discharges and suction inlets are separated from the pump controls, so the operator doesn’t have to straddle hose.”

The pump controls are in a half-compartment on the driver’s side, North says, while the officer’s side gains a full-height-and-depth compartment. “Departments can gain 1½ compartments in the same space as a traditional pump panel,” North says, “and with a top-mount pumper, which is super narrow with an eMAX, they can gain two full compartments because the pump panel is enclosed in the back of the crew cab.”

Ryan Slane, pumper product manager for KME, says KME custom-engineers its pump houses and components to create a greater amount of flexibility. “We take the customer’s desires and needs, then custom design the manifolding, plumbing, and accessories to try and make the pump house shorter,” Slane says.

Slane notes that KME builds the PRO™ rescue-pumper with a 22-inch-wide external pump house and a pump panel located in the driver’s side front body compartment. “We use both Hale and Waterous pumps in both 1,250- and 1,500-gpm sizes,” he says, “and fit a main and auxiliary suction, two 2½-inch discharges, two 200-foot 1¾-inch speedlays in trays, and 200 feet of 2½-inch hose in a tray. This all comes on a 200-inch wheelbase that gives great mobility and maneuverability.”

Wyatt Compton, fleet sales application engineer for Spartan Emergency Response (ER), says Spartan integrated the pump house into the body of its Transformer pumper and uses hydraulically controlled valves, which allows it to locate the pump panel module anywhere on the vehicle. He notes that Transformers have carried pump panels as narrow as 20 inches but that more often they are in the 40-inch-wide range. “We had a Transformer at FDIC International 2017 with the pump panel and compressed air foam system controls located at the rear of the truck,” he says. “It was for the Pullman (WA) Fire Department and had a 1,500-gpm pump, 500-gallon water tank, and 30-gallon foam tank.”

Compton notes that Spartan ER also makes the Innovative Pump Solution (IPS) where the pump panel is located directly below the speedlays, which are set at about shoulder height. “The preconnects and other discharges are in a roll-up door compartment next to the speedlays on the driver’s side,” he says, “while the officer’s side has an entire empty compartment in the space where the back of the pump house would have been.”

Ken Lenz, vice president of engineering for HME Inc., says HME builds a pumper for the California Governor’s Office of Emergency Services (OES) that has a 1,250-gpm pump house only 36 inches wide. “Standard pump modules are about 47 inches wide,” Lenz says, “so that’s a big savings in size. And, the pump house that we put on our Ford F-550 pumpers are 27 inches wide for a maximum of 1,500 gpm.”

Lenz points out that HME is working on a project “where the pump house is nonexistent. It’s called a distributed water system where the discharges are located around the vehicle, at the back, front, and sides where we are able to get rid of the pump house entirely,” he says. “We want to put the water into the various areas of the truck where it will be best used. We’ll be offering the system in early 2018 on a custom chassis.”

North adds that multiplexing, CAN bus wiring, and electric valve controls have all contributed greatly to bringing pump panels down to half the size of traditional top-mount pump panels. “CAN bus reduces the wiring by about 80 percent, with built-in diagnostics, and you can use smart valves where the programming is on the valve itself, which gets rid of the bulkiness of the controls,” he says. “With rear-mount pump panel controls, you can put them on the left or right side and still have the lower half of the compartment for storage.”

Compton adds that he has seen tablet-enabled pump panel layouts done by Smeal, Rosenbauer, and FRC. “We’re beginning to see controls and controllers networked-based through the SAE J-1939 protocol,” he observes, “which allows them to put all the controls into a single tablet display.”

HME has made a product called the Scorpion for a number of years: a tandem-front-axle and tandem-rear-axle 104-foot aerial platform. “We repositioned the wheelbase so it would turn in a 30-foot-wide cul-de-sac like a pumper,” Lenz says. “The pump panel is in a forward compartment, and it was our first try at electronic control panels when we first came out with it.”

Lenz believes there is a lot of wasted space on many of today’s pumpers. “With today’s electronics, you can control the pump from anywhere on the truck,” he says. “You don’t need a Wizard of Oz panel when you can control the entire vehicle from a multiplexed touchscreen. It allows you to collapse the pump house and either add more compartment space or shrink the size of the truck, depending on your situation.”

Dave Guynn, business line director of vehicle electronics for Class 1 and Weldon at Hale Products, agrees that electronic controls have made significant improvements in shrinking the size of pump panels. “They offer huge opportunities to shrink the size of a pump panel,” he says. “And, a product like our UltraView control panel goes further in allowing you to control every valve on a single display while reducing the size of the pump panel because you don’t need all the individual controls.” He adds that Hale’s SmartGOV+ is a foam system controller and pressure governor in the same display, which helps save space on the pump panel.”

Gregg Geske, director of North American sales for Waterous, says that to shrink pump panels, you have to overcome the need for discharge linkages. “We have to get away from manual valves and to go to auxiliary-actuated valves like electric to tighten panels up,” Geske says. “Some departments are using power takeoff (PTO) or hydraulically-driven pumps, instead of split-shaft pumps, where you can put the pump controls essentially anywhere you want on the vehicle. This works well for fire departments that want to compress the size of the pump house and pump panel.”

Guynn says Hale makes the Sidekick, a pump product originally designed for tankers to sit on the underside of the frame rail. “It allows the tank to be extended forward over the control panel, and depending on the type of pump and number of discharges, the pump can range from 500 to 1,500 gpm,” Guynn says. “Many fire departments are now using Sidekick on rescue-pumpers and pumper-tankers, which is mostly driven by departments’ needs for more real estate on the vehicle for storage.”

Guynn notes that Hale also makes the Qmax XS, or extra slim pump, which was designed with smaller spaces in mind. “If you’re looking to increase your compartment space, the XS allows you to put in up to a 2,250-gpm Qmax XS in 34 inches for a side mount,” he says, “compared with a standard Qmax, which needs 42 inches. The XS has the same performance advantages but has a narrower footprint.”

Geske points out that many of Waterous’s CX model pump products are PTO- or hydraulically driven, going up to 1,500 gpm. “Some of them are on tankers where they are mounted outside the frame rails, although the pumps can be mounted almost anywhere on the vehicle,” he says. “We also offer end suction pumps that can be mounted in locations where we are able to shrink down the size of the pump house.”