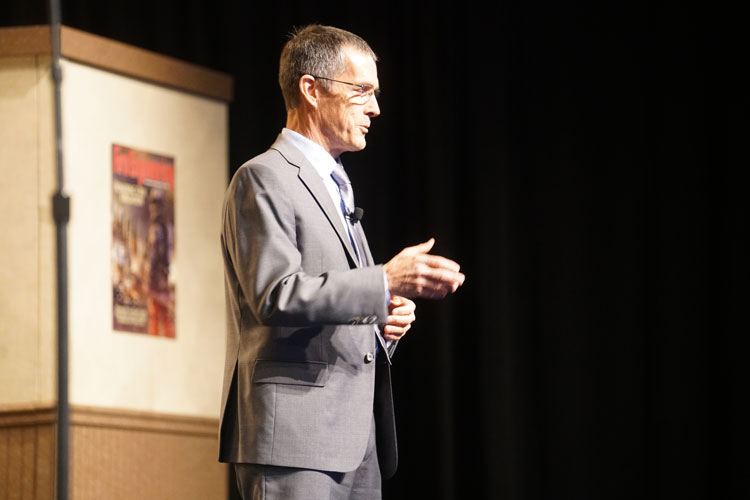 “One thing about training I know now that I wish I knew at the beginning of my career is the training technique ‘Deliberate Practice,’” Deputy Chief of Operations (Ret.) Ted Nee [Albuquerque (NM) Fire Department] revealed in his featured presentation at this morning’s General Session. Nee, a specialist in instruction and building instructional simulations, shared with the audience how deliberate practice can accelerate the acquisition of skills.

RELATED: Ted Nee Fire Simulations | INSTRUCTING THE INSTRUCTOR | Getting the Most from Your Incident Simulation Software

As a background for defining Deliberate Practice, Nee introduced a model of skill acquisition developed by Hubert and Stuart Dreyfus, professors at the University of California, Berkeley, in the 1980s when the brothers were conducting research for the U.S. Air Force on the effectiveness of pilot training. The model, which can be applied to any skill to be mastered, consists of these levels:

• Novice. The model refers to this phase as “Know what” knowledge. You know what you were taught, you have no practical experience, you rely on training, department standard operating procedures, and the direction of your company officer.

• Then, you begin to relate what you were taught to your experiences in the field, usually after being on the job for a while and getting a couple of fires and a bunch of EMS responses under your belt.

• Competent. At this stage, you’re no longer prone to making “rookie” mistakes. You can apply what you’ve learned to solve problems posed. You may not be the fastest or most skilled, but you get the job done.

• Proficient. You can read the critical cues–building construction, fire conditions, radio reports from crews—and recognize what those cues mean and react based on that recognition. An example of operating at this level would be quickly and accurately sizing up a structure fire.

‘Engine-1 is on the scene of a medium-sized two-story apartment building. We have fire and smoke showing from the second-floor side Alpha of a middle occupancy. Engine-1 is securing a water supply and stretching a line through side Alpha. We are in the offensive strategy. Engine-1 has command. Hold the current assignments.’

• Expert.  Experts see the world through the filter of all of their prior experience. They’ve progressed from following abstract rules to skilled behavior based on concrete experience and the unconscious recognition of new situations as similar to previous ones. This is a progression from “Know what” knowledge to “Know how” knowledge.

Nee explained that it generally takes about 10 years to progress through these five steps: “With the right circumstances and training, you can progress quickly through the first three steps, but it takes time to acquire the necessary experience to reach the proficient and expert levels. It often takes as much time to go from the proficient to the expert level as it takes to get from the novice to the proficient level. Every time you learn a new skill, you start back at step one as a novice.”

Deliberate Practice is a specific way of training that was identified by Florida State University Professor Anders Ericsson who sought to discover why some people excelled in a given field while others didn’t, Nee explained. “He discovered that the deciding factor was not innate talent or IQ, but how the subjects practiced. Ericsson and his fellow researchers found that across a wide-range of activities–whether physical, cognitive, or a combination of the two–how you practice makes all the difference.”

1. Clearly defined goals and objectives. “Every training session has to have a purpose. It isn’t just a matter of putting the time in,” noted Nee. “Ericsson refers to practice without clear goals as ‘naïve practice.’ Sitting around strumming on a guitar will not make you the next Eric Clapton.”

2. Be willing to work outside of your comfort zone. Nee added, “Making mistakes is essential for making progress.”

3. Adaptability. Nee gave an example involving physical training: If you do the same workout every day, you will reach a certain level of fitness and then plateau. If, on the other hand, you constantly change your program, adding weight to your sets and reps, you will continue to make gains. Nee cautioned: “There is a fine line between training that is too easy and training that overwhelms and discourages a student.”

4. Feedback and adjusting your efforts in response to that feedback. “Early on in training,” Nee explained, “most of that feedback will come from the teacher or coach. A good coach monitors your progress, points out problems, and provides confirming and corrective feedback. Over time, experienced students learn to monitor themselves, recognize their mistakes, and adjust their training accordingly.”

5. Deliberate. The practice is deliberate in that it requires your full attention and focus. Shorter, focused sessions are superior to longer less-focused training.

Nee noted that Deliberate Practice has proven to be effective often in his experience. He discussed one example that involved two fire department captains who needed to prepare for the assessment center portion of the promotional test for battalion chief. They had only three weeks to prepare because they had already taken the written part of the test and the assessment center portion was scheduled for three week later. Nee worked with them using the Deliberate Practice techniques, which Nee described to the audience. Both captains scored high in the test. One is now a chief, and the other is an assistant chief.