Technology, specifically electronics technology, has made deep inroads in positively affecting the performance and utility of aerial apparatus, whether platforms or straight sticks.

And with the increased use of technology on aerials, its deployment shows many benefits for firefighters operating and using the apparatus from safety perspectives to ease of use and ease of placement of the rigs.

Dave Reichman, national sales manager for Rosenbauer, says that at Rosenbauer, “Technology is the opportunity to keep everyone safer, and a byproduct of that technology is that we can make the operation of the aerial smoother for the operator.” Reichman notes that Rosenbauer’s Smart Aerial technology is standard on all its aerials, whether platforms, straight ladders, or tractor drawn aerials (TDAs).

“Smart Aerial is a tried-and-true system that, along with our programming—especially our soft touch controls—allows us to ramp down aerial movements so there is no jerking of the aerial,” Reichman says. “Soft touch controls buffer the movements so the aerial comes to a smooth stop and won’t allow any lateral whip.” Smart Aerial control screens are located at the turntable, the outrigger control station at the rear of the truck, and in the basket if an aerial platform. 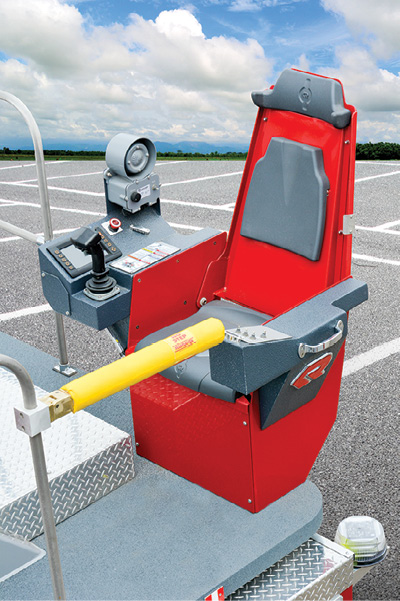 Tim Smits, senior sales manager of aerial products for Pierce Manufacturing Inc., says that technology has affected Pierce’s line of aerial products, especially its Command Zone technology that programs many operational and safety features into the system. “Any standard multiplexed vehicle that Pierce builds has an Aerial Information Center as standard,” Smits points out. “The control screen is built into the turntable, and if we’re dealing with a platform, in the basket too.”

Smits notes that as the aerial moves, the control screen’s active load chart changes to determine the various loads that can be had for various aerial angles and height, as well as for reach and water flow. “The Aerial Information Center also shows data about tip control and the aerial tip temperature, something that’s important because if there is too much heat at the tip, the operator might have to move farther away.”

Paul Christiansen, aerial sales manager for Ferrara Fire Apparatus, says Ferrara recently rolled out a new line of aerial apparatus that use a motion control electrical system to control the ladder. “It allows for better control as far as extension and elevation,” Christiansen says, “and automatically feathers the motion of the ladder at the end of a stroke of full elevation and extension. The same system has a ramping feature in the electric-over-hydraulic controls that eases the ladder to a stop instead of allowing a whiplash effect.” 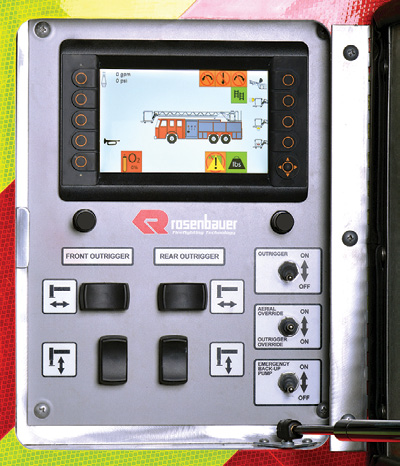 2 A close-up of the Aerial Control Screen that is part of the technological heart of Rosenbauer’s Smart Aerial system.

Jason Behler, sales application engineer for KME, says KME “has a system designed by Parker Hannifin Hydraulics for our aerial devices called the IQAN system that has an encoder that takes inputs from the vehicle and displays on a color screen how the aerial is extended and rotated.” He adds, “The multiplex screen also gives the tip load; calculates the load in real time as to how many people can be at the tip, middle, and base sections; shows the angle of the ladder through an inclinometer; and tells which side of the aerial may be short jacked. Screens are provided at the pedestal and, if a platform, in the basket.”

3 Pierce offers load-sensing lighting on its aerial ladders where the LED lighting color changes from green to yellow to red depending on the tip load being applied. (Photos 3-5 courtesy of Pierce Manufacturing Inc.)

The Bronto Skylift B-WRC wireless radio remote control system performs the same standard main functions as the stationary control center. It provides secure control for all boom movements and other firefighting functions. Its ergonomic housing has a built-in antenna, and it is lightweight and user-friendly. 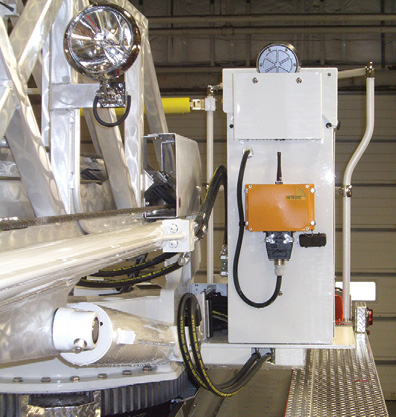 4 This control screen depicts Pierce’s aerial camera system that shows exactly where the aerial’s stabilizers will be deployed before the operator gets out of the cab. 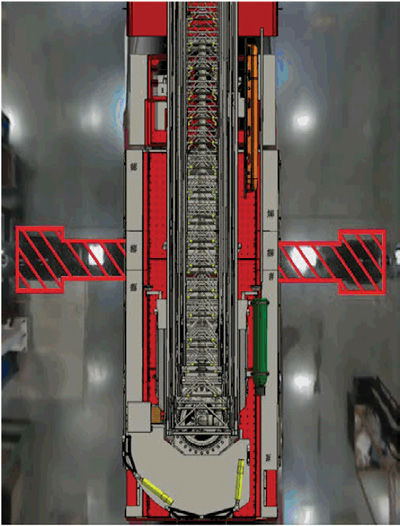 5 Camera systems on Pierce’s aerials are electronically controlled, and information is sent through a wireless routing system (shown) to the Aerial Information Center.

Bronto Skylift offers the B-LRF Laser Rangefinder, a compact measuring device using laser technology to measure distance. The data from the Bronto Laser Rangefinder aids in the preplanning of unit positioning. It is compatible with all Bronto units with Bronto+ control systems. Positioning the unit may also be efficiently supported by outrigger LED lights which enable a fast space evaluation. The system measures the distance between the target and the aerial platform and offers convenient display for results and calculating additional information. 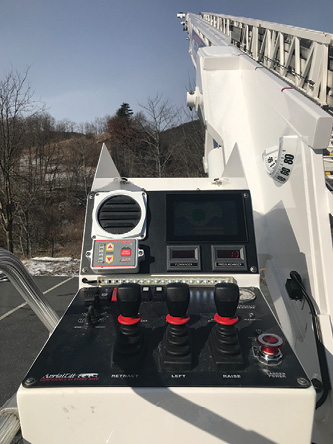 6 KME uses the IQAN system to take input from its aerials and display it on a color screen at the turntable position. (Photos 6-8 courtesy of KME.)

Reichman says Rosenbauer has an auto leveling option in its Smart Aerial programming, as well as laser positioning indicators for the jacks. “If you engage it before the jacks are set up, when all four jacks sense pressure, the vehicle will level itself,” he points out. “If the truck is already set up and the operator wants to adjust it, he can activate auto leveling as long as the outrigger switch is still activated. For putting the truck away, we offer an ‘All Jacks Up’ programming option where one button brings all the jacks off the ground and into their tubes. Then the operator brings the outriggers into the truck.”

Smits says that Pierce has a camera system on its aerials “that shows exactly where the stabilizers will be deployed before the operator gets out of the cab. That way he can determine if a vehicle or storm sewer may be in the way. The system uses a camera and laser light to indicate where the stabilizer might be placed. The system also can be used with only the camera or only the laser light.”

7 This KME control screen shows the aerial’s elevation, rotation, extension, and load capacity, among other information.

Smits notes that another feature of Pierce’s Command Zone technology is stabilizer level assist. “The operator runs out the stabilizer, has it touch the ground, and the truck auto levels itself, which is what the electronics allow us to do,” he says. “It levels side to side and back to front, giving the operator a much faster setup time. With our Ascendant aerial, two stabilizers run out and touch the ground, the operator hits level assist, and the truck self-levels and drops the rear stabilizer straight down.”

Christiansen says that Ferrara uses a motion system with an automatic diverter valve on the hydraulic system that senses when all jacks are out and extended. Once that happens, the hydraulic fluid in the system engages and auto levels the truck.

Behler points out that for KME’s auto leveling system, the operator gets out of the apparatus, engages the aerial power takeoff, then uses a handheld tethered controller to extend all four stabilizers. “When they are extended, one switch puts all four jacks downward, with the first jack stopping at the ground and waiting for the other three to sense pressure,” he says. “Then the inclinometer in the torque box levels the truck side-to-side and front-to-back.”

Reichman says that Rosenbauer offers ultrasonic sensors on the perimeter of a platform basket as an option on its aerials. “We usually set them for 18 to 24 inches,” he says. “Once the operator gets to that point at an obstruction, the platform will stop, and if the operator wants to get closer, he overrides with a button on the smart screen that allows him the ability to creep closer with slower control.”

Christiansen says that Ferrara offers proximity sensors at the tip of ladders and platforms to warn the aerial operator when the tip is getting close to an obstruction or a building.

Behler points out that KME offers a standalone proximity sensor system with a separate control screen for both its ladders and platforms. “If it’s a straight ladder, the sensors are built into the ladder tips,” he says. “For a platform, the sensors are around the outside edge. In either case, the distance to an obstruction is shown on the control screen in numerical feet, and a programmable audible alarm alerts the operator to the distance to the obstruction.” 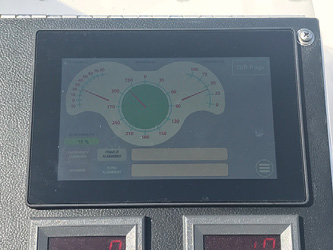 Aerial manufacturers offer various types of equipment at the tips of ladders and platforms, from lighting to thermal imaging cameras to digital video cameras.

Bronto Skylift’s B-SEC portable surveillance kit enables easy monitoring of firefighting operations from, for example, an operations center. The package includes a color video camera with high-performance zoom and a lightweight control tablet designed for outdoor use. The B-SEC kit can be retrofitted to all Bronto aerial devices. It includes a compact, easy-to-mount camera with full 360-degree rotation pan and adjustable tilt control. Its operational range is up to 300 meters. Options include an infrared/white light illuminator or thermal imaging camera.

Smits says that Pierce has installed various video cameras, thermal imaging cameras, and forward looking infrared cameras on aerial tips. “We’ve put in both hardwired and wireless cameras and, if the truck is multiplexed, we tie it into our Aerial Information Center,” he says.

Pierce also offers load-sensing lighting on its aerial ladders, Smits adds. Pierce uses TecNiq Model D05 LED rung lighting on both sides of an aerial ladder base, lower, upper mid, and fly sections. The lighting is located adjacent to the ladder rungs along the lower rail of the ladder sections and runs the entire length of the section. Smits says the lighting color visually indicates the load being applied to all four sections of the device, with zero to 80 percent of the tip load being green and an acceptable load, 81 to 105 percent of tip load being yellow with a load caution, 106 to 125 percent of the tip load being red LED lighting with an audible alarm for a ladder load warning, and 126 percent or more tip load being red LED lighting and a steady audible alarm for a ladder stability warning. “We’re the first in the industry to come up with this system, which is very accurate,” Smits points out, “and technology is allowing us to implement it.”