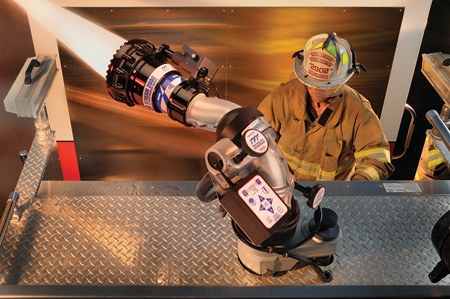 Getting firefighters off the tops of vehicles was a main reason for introducing remote control monitors, but since they first made their appearance on the tops of pumpers and at the tips of aerials, advances in electronics, networking, and new design concepts have turned them into much desired and used pieces of equipment on fire trucks.

Eric Combs, vice president of OEM business for Elkhart Brass Company, says Elkhart Brass has two primary focus areas when it comes to remote control monitors. “The first revolves around the robustness, reliability, and durability of the monitor,” Combs points out. “Some early-technology electric-mechanical monitors had reliability issues that caused a concern for fire departments when shifting from manual monitors. But through technological advancements, we developed a more robust and rugged product through use of a potting material, basically a liquid plastic, that hardens and encases circuit boards and makes it impossible for water to get in and also helps prevent vibration from cracking the boards.”

Elkhart Brass’s other primary focus area concerns integrating the monitor with a truck’s CANBUS J-1939 system, Combs notes. “In the past you had to open up the unit and get to the circuit board to change settings,” he says. “Now we do it through communications where we can change the stow position, flow rate, oscillation, or anything else and even download diagnostics. You never need to touch the circuit board anymore.”

Elkhart Brass makes the EXM line of remote control monitors, all of which use the same controller program and the design feature of potting the circuit board, Combs says. The Sidewinder EXM is a bumper turret monitor ranging from 15 to 750 gallons per minute (gpm), the Cobra EXM runs from 500 to 1,500 gpm, the Scorpion EXM from 1,250 to 2,500 gpm, the newly launched SkyStream EXM at 3,000 gpm, and the Sidewinder EXM UHP ultra-high pressure monitor up to 300 gpm at 1,500 pounds per square inch (psi).

Jeff Benson, global product manager for Akron Brass Company, says the company has been making remote control monitors for more than 15 years and, in the past few years, made changes in their control architecture. “We now use the Universal 2 logic box, which has the advantage of ease of installation for OEMs,” Benson says. “It greatly reduced the necessary wiring and introduced networking features that operate through the truck’s CANBUS J-1939 communication capabilities.”

In remote control versions, Akron Brass makes the 3462 forestry monitor that ranges from 30 to 300 gpm, the 3418 Apollo electric that runs up to 1,250 gpm, and the StreamMaster II in 1,500- and 2,000-gpm versions. “They all use the Onboard control system,” Benson points out, “and all have J-1939 connectivity.” The forestry monitor typically is used on a bumper turret, he adds, while the Apollo usually is deck-gun-mounted on a pumper. The StreamMaster II typically is a ladder monitor that can be controlled from the tip or the pedestal, but it is also used on pumpers that require more gpm,” Benson says.

Rod Carringer, vice president of sales and marketing for Task Force Tips (TFT), says TFT has continually worked to solve problems that plagued some legacy monitor designs. “Reliability of electrical components such as wiring, connectors, chip boards, and electrical interfaces is excellent now,” he says, “even under harsh fireground conditions. Electric motors and components have been hardened for the rugged environment they work in and are more dependable. And, the size and weight of components continue to be reduced, allowing more elegant and efficient installations.”

In addition, Carringer says, TFT’s new computational fluid dynamics software programs have eliminated poor stream performance, excessive friction loss, and internal stream turbulence. “All of the cabling for our monitors is gel-filled,” Carringer points out. “If the cabling gets a nick in it anywhere, it scabs over and prevents water or moisture impregnation.”

TFT makes remote control monitors in sizes from 100 to 2,000 gpm, with the Monsoon being its high-volume model, typically rated at 2,000 gpm but which can be run to the 2,250-gpm range, Carringer notes.

Daniel Clarke, national sales manager for Williams Fire and Hazard, a division of Tyco Fire Protection Products, says Williams makes remote control monitors for different types of hazards. “We have monitors that are used on quick-attack trucks, on top of pumpers, in turrets, and on trailers,” Clarke says. “Often they are placed in high-hazard areas where you don’t want to put personnel.” Clarke says the company’s Ranger 1, a 1,000-gpm remote control monitor, and its Ranger 1.5, a 1,500-gpm unit, are typically used on quick-attack trucks that can get into tight places. Standard size pumpers generally carry remote control Williams monitors in the 3,000- to 4,000-gpm range, he notes, while trailers are often outfitted with 6,000- to 8,000-gpm Williams remote control monitors.

James Morgan, a representative for Williams Fire and Hazard, says the two popular remote control monitors used on municipal and industrial fire apparatus are the Ranger 3 and the Ambassador. “The Ranger 3 has a six-inch stainless steel waterway that can put out 4,000 gpm,” Morgan points out. “The Ambassador’s configuration is an eight-inch stainless steel waterway that has a 2,000- to 6,000-gpm range-although it is capable of 8,000 gpm, but most apparatus manufacturers don’t build a truck capable of 8,000 gpm.”

Carringer says that using a remote control monitor on a pumper means the operator can stand closer to the fire and place the water stream more precisely instead of being back at the vehicle and maybe in the smoke. Remote control bumper turret monitors, like those used on wildland and brush trucks, mean safety for firefighters, he adds, where one firefighter can fight a brush fire and be moderately effective. “Most aerials have a remote control monitor at the tip so they don’t have to position a firefighter on the ladder or in the bucket,” Carringer says. “We also do a lot of dual nozzles on aerial platforms, where one monitor is manual and the other is remote control, usually one carrying a combination nozzle and the other a smooth bore.”

Morgan says that for the monitors Williams makes for fire apparatus, it only sells remote control units. “When you are looking at 4,000 gpm of water going 350 to 400 feet away from you, the column of water is so big and the fire so far away that it’s difficult to pinpoint if you are in the correct position,” he says. “Using the remote control wireless allows you to better place the water where you want it.”