May 3, 2014 brought the 2nd Annual MABAS 7 Swap Meet to Peotone, Illinois. There was a variety of vendors on hand for the event held at the fairgrounds. An added attraction was an outside display of several pieces of fire apparatus. Peotone Fire Protection District brought along several of its current fire apparatus, and there were several additional vintage apparatus on hand.

Have you ever wanted to tiller a tractor-drawn aerial? Recently, Peotone Fire Protection District Fire Chief Bill Schreiber purchased a 1982 Pirsch 100-foot tractor drawn aerial that served the Louisville (KY) Fire Department. For the swap meet, Schrieber had arranged for a driver’s course to be set up on the fairgrounds. For the modest price of $20.00 you could tiller the big rig! This was a fundraiser for Shawn Richards, a member of the University Park (IL) Fire Department. This proved to be a very popular event as it raised more than $1,200 in just five hours to help Richards in his battle with cancer. The big rig looked like it could still be in front-line service. For my Heart of Illinois Fire Enthusiasts & Collectors (HOIFEC) fire buff friend Bill Fricker, a huge Pirsch fan, the chance to tiller the rig was an opportunity of a lifetime, and he crossed one big item off his bucket list. Great idea, Bill, and “thanks.” 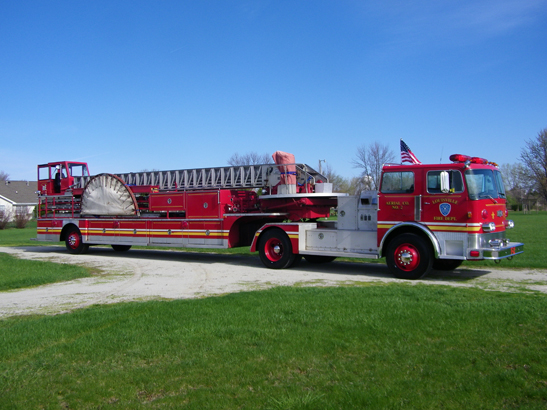 Click here for more vintage apparatus from the event.

On static display was a nice selection of additional apparatus. The Peotone (IL) Fire Department’s 1935 Reo-Seagrave 500-gpm open cab pumper now serves the department as its parade rig. We learned that plans were in place to take this pumper into Chicago, Illinios, for the June muster at the Chicago Fire Academy.

Parked a couple of rigs down from the Reo was a unit that brought back memories of the movie “Backdraft.” In the movie, the star pumper was a Ward LaFrance-Ranger-E-ONE/Able 2,000-gpm pumper. Mike Frederick, a full-time Manhattan (IL) Fire Protection District firefighter now owns what he calls a “clone” Engine 17 from what still is the highest grossing revenue movie about firefighters.

It’s hard to believe that “Backdraft” was released in 1991—making it almost 25 years since its debut. Apparatus enthusiasts can recall the unique-looking pumpers with their big cabs and roof-mounted suction hoses responding to huge fires in the Windy City. It turns out that the pumpers in the movie were almost 20 years old at the time of filming. In 1970, the Chicago Fire Department (CFD) purchased seven of the Ward LaFrance 2,000-gpm super pumpers. After nearly two decades of service, the rigs were candidates for rehab. By that time Ward LaFrance was no longer in the fire apparatus manufacturing business. The department awarded the contract to update the pumpers to Able Fire Equipment, Frankfort, Illinois. Able used Ranger cabs and E-ONE fire bodies to refurbish six of the big pumpers. The refurbished 2,000-gpm pumpers served a variety of Chicago Fire Department engine companies for only a short period of time. 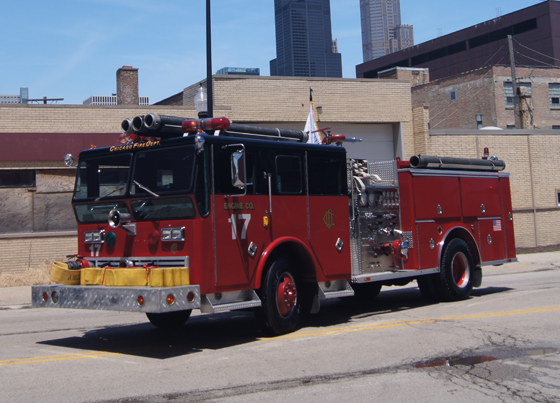 Click here for more vintage apparatus from the event.

Along came Ron Howard and his film production company. In the apparatus world, some new “stars” were born. The production company leased shop numbers D-374 and D-375 to become Engines 17 and 51 in the movie. On completion of filming, the units returned to service with CFD, running as Engines 69 and 113. Both of those rigs were sold in 2001.

This brings us to Peotone and the appearance of what Frederick refers to as a “clone” of the rig used in the movie. One thing is for sure, it does look like the same rig as is in the movie. It turns out that Frederick is totally hooked on these old Ward LaFrance pumpers. He even owns a second Ward LaFrance-Ranger. Frederick is the first to say that although the rigs look just like the units in the movie, they are not the actual movie rigs. The fate of those two units is not all that clear. In any case, Frederick and his friends are having a great time taking the pumper to area shows and parades. It is no easy task keeping a forty-four year old rig in good running order. In hot and humid summer Illinois weather, Frederick refers to the driving experience as like driving a tank. I guess someone forgot to have the cabs air conditioned! Rounding up spare parts for replacements is becoming a bigger challenge as the years pass.

While Frederick was filling me in on his clone pumpers, he also admitted to having part of another type of rig that was featured in “Backdraft.” He has a Mack-Pirsch rear-mount aerial ladder that is minus the 100-foot Pirsch aerial ladder assembly. Although this old truck is a long way from being ready to show or parade, Frederick is in search of a complete Pirsch 100-foot aerial ladder assembly at a reasonable price. He is open to good offers. Let us know at Fire Apparatus & Emergency Equipment if you can help, and we will get the word to Frederick.

Although it was impressive to see the Ward “clone” on static display at Peotone back in May, it was far more impressive to see both the Ward LaFrance and the Pirsch TDA team up to parade and demonstrate at the big fire muster at the Chicago Fire Academy on June 14. With Frederick on vacation, one of his friends was glad to pitch in and show off the pumper. Following the parade, the two pieces were set up in the street next to the academy. The big Ward pumped an impressive flow of water to the top of the Pirsch aerial, much to the delight of the fire buffs on hand.

It is difficult to realize how many years have slipped by past since these rigs were in front-line service. It is with thanks to persons Schreiber and Frederick that we fire apparatus enthusiasts can enjoy seeing these vintage rigs in action. Next up is the Chicagoland Emergency Vehicle Show set for Saturday, August 2 in North Aurora, Illinois. Come on out and see the old movie “stars.”

If you have an interesting vintage apparatus that you would like featured, contact Ron Heal at ron-lois224@sbcglobal.net or (309) 698-6968