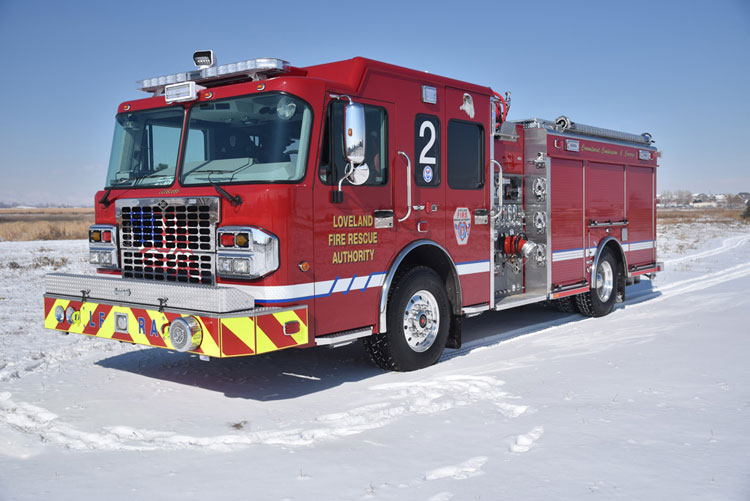 The Loveland (CO) Fire Rescue Authority has an apparatus replacement system in place that has engines running for 12 years of front-line service with five years in reserve before being replaced by new rigs. Loveland standardized its engine design specs in 2010 and since that time has purchased four pumpers from SVI Trucks, the most recent being a rescue-pumper delivered in August 2018.

Built on a Spartan Gladiator MFD (medium four door) chassis and cab, the rescue-pumper is powered by a Cummins 450-hp ISL9 diesel engine, and an Allison 3000 EVS automatic transmission. The vehicle has a wheelbase of 184 inches, an overall length of 31 feet 11 inches, and an overall height of 9 feet 11 inches.

“The basic concept we use on our engines is consistency through all of them,” says Greg Ward, division chief of operations for Loveland Fire Rescue Authority. “Equipment is almost in identical locations on each engine because every year and a half to two years engineers move among our five staffed stations. And, each of our engines carries a battery-powered combi tool.”

Jason Kline, Colorado and Wyoming sales manager for SVI Trucks, says the Loveland rescue-pumper has a Waterous 1,500-gpm pump, a 500-gallon water tank, a 20-gallon Class A foam cell, a FoamPro 2001 foam system, and Akron Brass valves. “The body is constructed of 3/16-inch aluminum, compartments are covered by ROM roll-up doors and have OnScene Solutions cargo slides in them, and the engine has a Ziamatic ladder lift and air-operated split hosebed covers.” 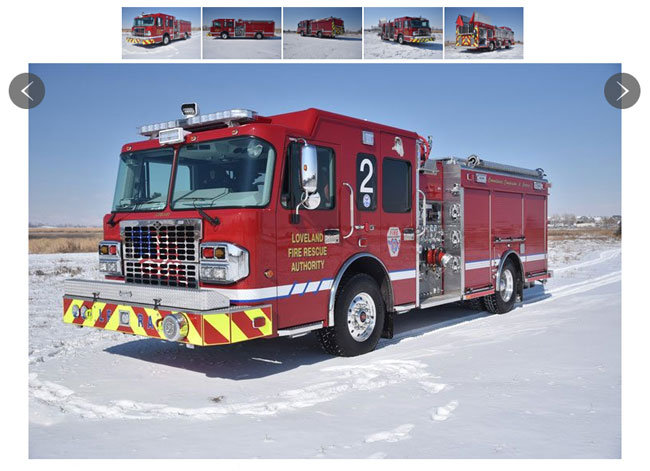 The Loveland Fire Rescue Authority is a combination department with 90 paid firefighters and 18 volunteers operating out of eight stations that provide fire suppression, rescue, hazardous materials, ARFF, confined space, collapse and trench rescue, and EMS response services to a population of 100,000 in an area that covers 190 square miles.

Ward points out that Loveland has a fifth rescue-pumper on order with SVI Trucks, scheduled for delivery in 2019 and identical to the four prior pumpers with only small changes. “On the newest engine we have and the one planned for next year, there is an 1½-inch preconnect in the rear for a Fognail® piercing nozzle,” he says. “The Fognail puts out a fine mist that converts to steam, and we’ve deployed the Fognail several times. It’s especially good in attic fires where we’ve seen significant reduction in damage. And if we are in a wildland fire situation, we can break off the Fognail connection and hook up wildland hose to the preconnect.”

ALAN M. PETRILLO is a Tucson, Ariz.-based journalist, the author of three novels and five non-fiction books, and a member of the Fire Apparatus & Emergency Equipment editorial advisory board. He served 22 years with Verdoy (NY) Fire Department, including the position of chief.