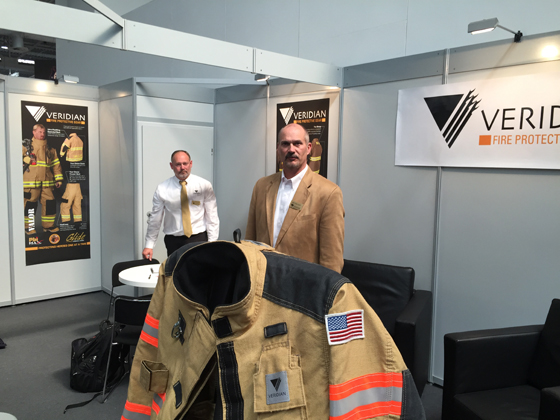 As we’ve seen with many companies during Interschutz, being a part of the biggest fire service exhibition in the world is not always about displaying product Such is the case for Veridian, a personal protective equipment manufacturer based in Spencer, Iowa.

According to Robert Gilbertson, national sales manager for Veridian, Interschutz is a way to “support our distribution. For this show, that would not be so much Europe, but Asia, the Middle East, Latin America, and South America,” he says. “So, we’ve met with several of them already because many of them are here. So, to be with them and to support them.”

In many instances at Interschutz, the American companies exhibiting here have been working to become larger players in the global market after establishing themselves in the States. But, Veridian started the other way. “With us, it’s a little different because we started global. Our company’s initial objective was turnout gear for the international markets. It wasn’t until five years after we got going that we started selli ngin the United States. But to be a key player in the industry, you have to offer your products worldwide. And, we are one of the market leaders in terms of sales outside of the U.S.

Roberston says that Veridian has three levels of turnout gear. “Our premier would be our Velocity Series. It has the most ergonomic features, the most flexibility,” he says. “We also offer a lighter-weight, less-material garment, but I think the Velocity Series with all the flexibility and ease of movement is our premier.”

All in all, creating awareness for those who don’t know Veridian is a de facto part of being at Interschutz, but according to Robertson, “It’s just about really supporting our international clientele.”