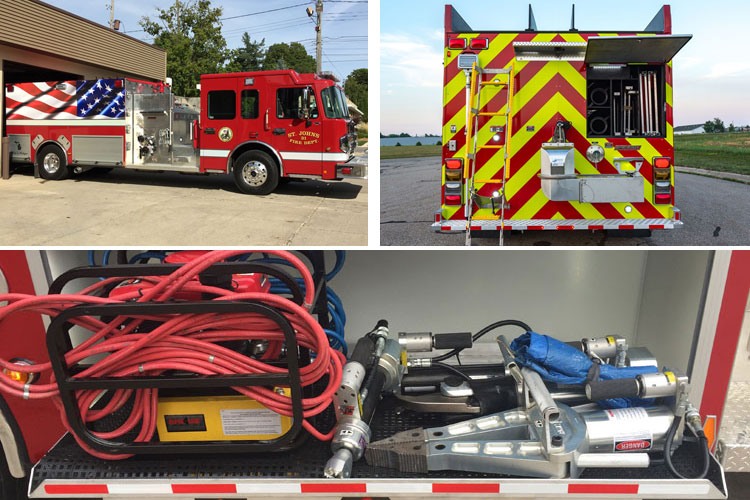 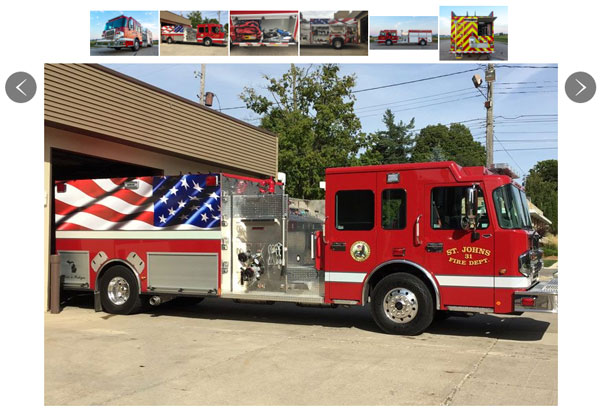 CLICK ABOVE FOR THE FULL GALLERY OF THIS RIG >>

The St. John’s (MI) Fire Department needed to replace a 25-year-old top-mount pumper, but with daytime response for the volunteer fire department being limited, it wanted a vehicle that could carry the most water possible on a single rear axle.

“The vehicle would run second behind our 2006 Ford F-550 mini pumper with a Darley 1,250-gallon-per-minute (gpm) pump, a 250-gallon water tank, and a compressed air foam system (CAFS), says Jordan Whitford, a firefighter and the head of the St. John’s truck committee.

“We have hydrants in a lot of our fire protection area,” Whitford says, “but we wanted a pumper-tanker that would allow us to drop 2,000 gallons of water into a portable water tank and then call in other tankers behind it if necessary. We also wanted to carry over the CAFS capabilities from our mini pumper.”

Grant Spencer, general manager of Spencer Manufacturing, which got the contract for the new pumper-tanker, says that the St. John’s truck committee wanted the vehicle built on the shortest wheelbase possible. “So, we built them a pumper-tanker on a 242-inch wheelbase, with a width of 100 inches, an overall length of 36 feet, and an overall height of nine feet six inches,” Spencer says. “The pumper-tanker has a Darley 1,500-gpm top-mount pump, a Darley Auto CAFS, a 2,000-gallon water tank, and a FoamPro foam system on a Spartan MFD custom chassis with an APR polypropylene body.”

Ahren Taszreak, vice president of sales and operations for Kodiak Emergency Vehicles, who sold the pumper-tanker to St. John’s, says that the fire department liked the fact that both Spencer Manufacturing and Spartan bodies were made in Michigan, as well as Spencer’s ability to custom design the rig for them. “They wanted the longest vehicle possible on a single axle while carrying as much water as possible,” Taszreak says. “We customized the entire truck from the cab all the way back to the tail for them.”

Taszreak notes that inside the crew cab St. John’s wanted three rear-facing firefighter seats, with cabinetry and a refrigerator along the cab’s back wall. “During the prebuild process, that got changed to a shelving unit along the back wall for equipment and personal items,” he says. Taszreak notes that the price of the vehicle without equipment was $476,615.

Spencer points out the pumper-tanker has a Newton 10-inch square swivel dump valve at the rear that can be operated from the rear of the vehicle or the cab, a Fireman’s Friend three-inch auto fill valve at the rear, ROM roll-up doors, Whelen LED warning lighting, FRC Spectra scene and telescoping pole lighting, a Spencer stainless steel rear access ladder, a portable water tank, and suction hose storage.

Whtford points out that St. John’s is one of the first departments in the area to use CAFS on structure fires. “We loved using CAFS on our mini pumper, which is why we put it on our pumper-tanker,” he says.