The list of equipment carried on the Phoenix LTs is impressive
and allows the crews to handle almost any emergency.
(Phoenix Fire Department Photo) 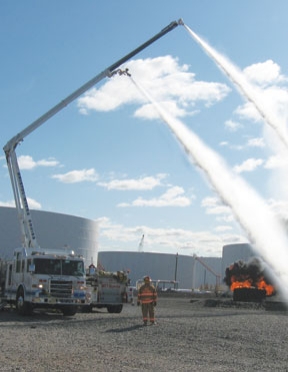 When needed, 40 CO2 bottles on San Francisco’s unit can be
used for smaller or more remote electrical fires. 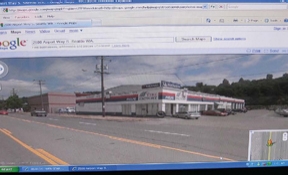 Open the doors of Plano’s Utility 12 and you will see a
multitude of rehab and miscellaneous equipment as well as
spare oxygen bottles and a large Bauer compressor.
(Fire Apparatus Photo by Bob Barraclough)

Plano’s air bottle system can fill three air pack bottles at a time
in encapsulated compartments. Six large 6,000-psi storage
bottles are mounted under the compressor, which is driven by
a 35,000-watt PTO generator.

This is the workstation for San Francisco’s 4-ton carbon
dioxide extinguishing system for transformer fires. Notice
the hose reel at the top of the compartment. It is one
of three reels, each containing 100 feet of hose.

The number of special purpose vehicles has been increasing as the scope of the fire department responsibilities has broadened. It used to be firefighters fought fires and, in their spare time, sat out front of the station watching the cars and young ladies go by.

Today, the number of fires has been reduced, but the role of the first responder has greatly expanded. Emergency medical service, trench rescue, swift water rescue, hazardous material spills, water flow alarms are just a few of the many tasks that have been assigned to the fire and rescue department.

In my travels I have seen many rigs that departments have developed to meet their special needs. This month we’ll look at three concepts that are all contained in a “box” mounted on a commercial chassis. From the outside, they all look the same. So you have to carefully read the signage on the side to get a clue as to what may be in the box.

In Phoenix some years ago, Chief Brunacini and his staff realized that with the increasing number of EMS calls, there were times when it was more expeditious to send a ladder truck with an ambulance on an EMS call. The downside was that this piled up mileage on a very expensive vehicle when in fact the ladder and pump were not needed.

This led to the Ladder Tender (LT) concept, where all truck companies have two vehicles in the station. One is a custom chassis ladder truck or platform with all of its associated equipment costing around $900,000. The second unit is a commercial chassis LT box carrying extrication equipment, air packs, medical supplies, saws, virtually everything the truck has except the ladder. And, it costs about $425,000 fully equipped, or about half that of a ladder.

When a call is dispatched for the station, based on the type of call and the information received from the dispatcher, the captain makes the decision on what unit to take. If it is a fire call, no question, the ladder goes. On a medical emergency, he or she would normally choose the LT.

The system works well for Phoenix and for its citizens. In talking with Chief Brunacini several years ago, he stated that he could only remember having to special call a ladder twice in about six years. FYI… Pierce supplied the latest group of ladder tenders.

In San Francisco, Pacific Gas and Electric has many high voltage transformer vaults located under heavily traveled streets. The department has been using carbon dioxide to suppress and extinguish fires in these vaults using a unit built in 1986.

San Francisco just received a new “box” on an International chassis that was designed by the city’s Bureau of Equipment and built by Hi-Tech Emergency Vehicles. The unit carries 4 tons of CO2, which can be dispensed through the three hose reels containing 100 feet of hose each.

A short expendable “whip” goes on the end of the hose and then a special nozzle designed by the SF shops is attached and dropped into the vault. In most cases, according to firefighter Paul Berry, flooding the vault will extinguish a fire in 5 to 10 minutes.

In addition to the large CO2 storage, the unit carries 20 smaller CO2 bottles on each side; miscellaneous equipment to deal with electrical problems; a 15,000-watt generator; and a SVI Command Light tower.
The carbon dioxide unit is housed at Station 13 and is staffed, when required, by members of the engine company at the station.

Plano, Texas, has a light-and-air-plus “box” because the rig also serves as a mobile air pack maintenance facility; a rehab unit complete with ice chests and refreshments; and an O2 bottle replacement for ambulances.
The unit is outfitted with a 35,000-watt PTO generator, two SVI light towers and a large capacity Bauer compressor system with six 6,000-psi storage bottles capable of filling three air pack bottles at one time.

Plano’s box has dedicated operators 24-7 who are all certified Scott technicians. It visits every station at least twice a week to replenish oxygen bottles and do any air pack maintenance required. It also responds to all full box alarms in this city of 265,000 citizens. The 2004 unit was built on an International chassis by SVI and is a somewhat smaller version of units built for the Ft. Worth Fire Department.

Many fire departments have found uses for a “box” in their fleet. There are rigs for hazmat, trench rescue, command, mass casualty and foam. You name it, and someone has found a way to stuff the equipment into a “box.”

Editor’s Note: Bob Barraclough is a 50-year veteran of the fire service and fire manufacturing industry. He is chief columnist for Fire Apparatus & Emergency Equipment magazine and a 20-year member of the NFPA 1901 Fire Apparatus Standards Committee. A principal organizer of the annual FDSOA Apparatus Specification Symposium, he is also a past president of the Fire Apparatus Manufacturers Association. Barraclough serves as a consultant to Rosenbauer America and is called upon as an expert witness in litigation involving fire industry products. His career includes executive positions at E-ONE, Hale Fire Pumps, National Foam, Span Instruments and Class 1.