The New Melle (MO) Fire Department considers itself a forward-looking and forward-thinking agency, so when it needed a new rescue-pumper to take the place of a 1993 Central States pumper, it knew it wanted to continue with a rear-mount style and decided to load the rig up with the latest technological advances.

The SAM Control System manages the rescue-pumper’s pump, water tank, foam tank, intakes, and discharges, says Brian Franz, vice president and owner of Sentinel Emergency Solutions, who sold the rescue-pumper to New Melle. “The New Melle firefighters had seen the SAM system that we put on an aerial quint for the Maryland Heights (MO) Fire Protection District and were impressed by how it operated,” Franz points out. “The chief and some firefighters went to Maryland Heights, checked out the system, and got a full demo on the truck. They loved the SAM system.” 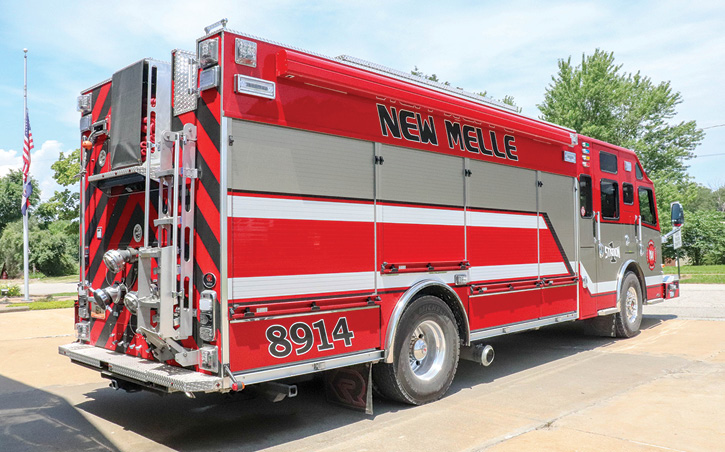 2 The New Melle rescue-pumper is powered by a 505-hp X15 diesel engine and an Allison 4000 EVS automatic transmission. 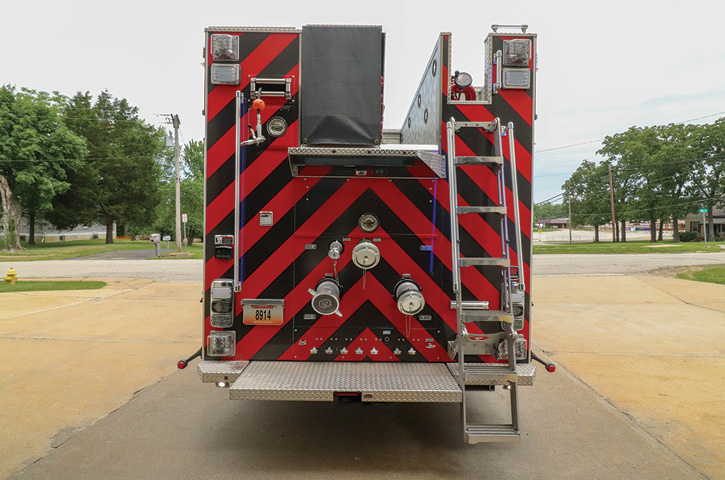 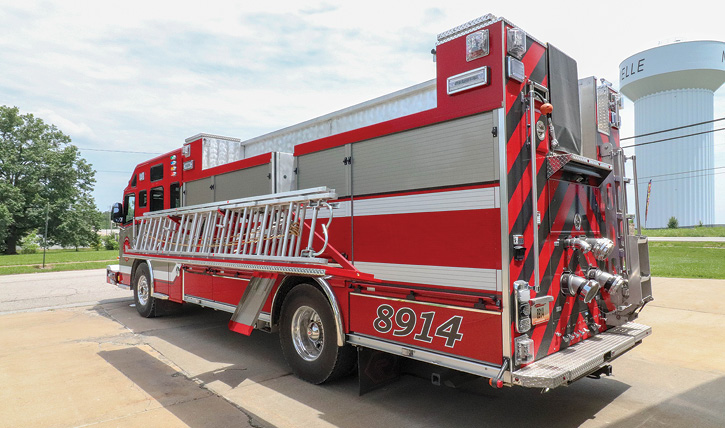 4 A Rosenbauer-designed hydraulic/electric ladder rack sits on the driver’s side of the vehicle.

Rick Massey, New Melle’s chief, says that the department liked the easy-to-use SAM system and also wanted to be able to shrink the pump panel on the new rescue-pumper. “We were able to do that with the SAM Control System, which was developed by Jason Serrano, who lives about three miles away from us. The system is able to maintain pressures on various lines, turn valves on and off, fill the vehicle’s water tank, and switch water sources if necessary—all from the control screen on the pump panel or from the wireless tablet.”

The SAM Control System allows an operator to easily handle interrupted water flow issues as well as handline pressure spikes and water pressure problems because of pump cavitation or loss of hydrant pressure, Franz points out.

The rescue-pumper that Rosenbauer built for New Melle, says Roger Parker, central regional sales manager for Rosenbauer, is built on a Commander four-door chassis and cab with 18-inch raised roof and seating for four firefighters. “The vehicle has a Rosenbauer EXT body, Reyco Granning independent air ride front suspension, and air ride rear suspension that is able to squat by six inches for easier access in and out of the cab,” he points out, “and is powered by a 505-horsepower (hp) Cummins X15 diesel engine and an Allison 4000 EVS automatic transmission.” The front axle is rated at 24,000 pounds, while the rear axle handles 31,500 pounds.

The New Melle rescue-pumper has a 217-inch wheelbase, is 35 feet 8 inches long, and is 8 feet 4 inches high, Parker notes. The 78-inch-long cab features H.O. Bostrom seats for all four firefighters, gear compartments behind the driver’s and officer’s seats, and two outboard forward-facing seats with a cabinet centered between them on the back wall.

Service area: The New Melle Fire Department provides fire and rescue services to 121 square miles of a residential and rural fire district with a population of 12,500 people that borders a wildlife refuge area of more than 17,000 acres.

Franz says that the rescue-pumper has three 1¾-inch crosslays in the 28-inch extended front bumper, two of 200 feet each, and one of 100 feet. “The department has a lot of single-lane roads in its district and has to nose in the vehicle to most of their calls,” he notes. “In the middle of the rescue-pumper is one 2½-inch crosslay of 200 feet and one 2½-inch dead lay of 100 feet. The rig has a 2½-inch discharge on the rear left side, a 3-inch discharge on the rear right side, a 2½-inch discharge preconnect on the left side, a one-inch booster reel on the top, and two 6-inch intakes at the rear.”

Massey points out that the department wanted a remote control monitor/deck gun on the rescue-pumper and had Rosenbauer install a Task Force Tips Monsoon 1,250-gpm monitor with an Extend-A-Gun at the top right rear of the vehicle adjacent to a standing platform at the top edge of the hosebed that’s accessible from an EZ-climb ladder on the right rear of the rig. A Rosenbauer-designed hydraulic/electric ladder rack is on the driver’s side of the rescue-pumper. He adds that the department set up CAFS on each of the vehicle’s discharges to run wet, medium, or dry CAFS foam. “For a structure fire, we like to go with wet foam at three percent and 85 gpm,” he says, “but for brush work or protecting the side of a building, we would go dry at one percent and 30 gpm.” 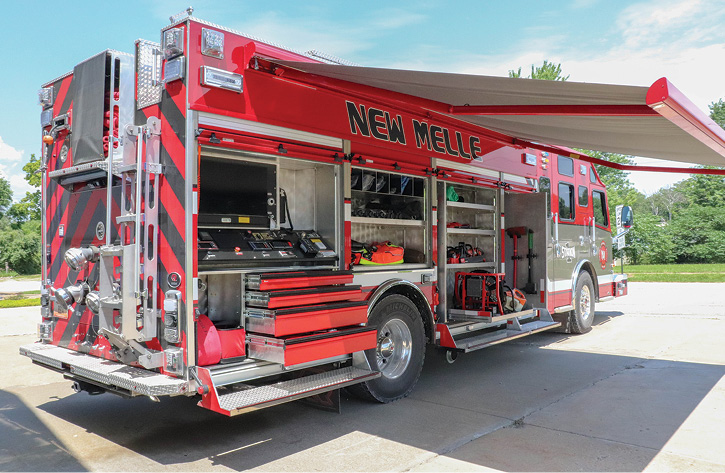 5 The New Melle rescue-pumper has its control panel in the R4 compartment that is protected by a curbside awning. 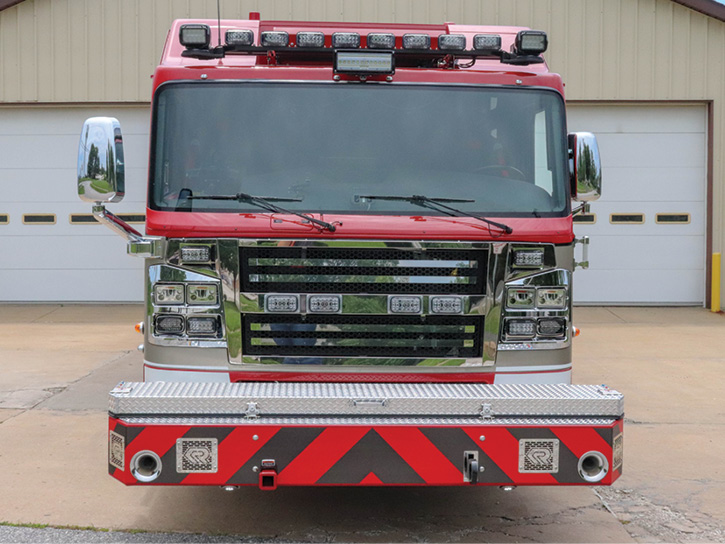 6 The front of the rescue-pumper has a 28-inch extended front bumper and covered full-width hose trays holding two 200-foot lengths of 1¾-inch hose and one 100-foot length of 1¾-inch line. 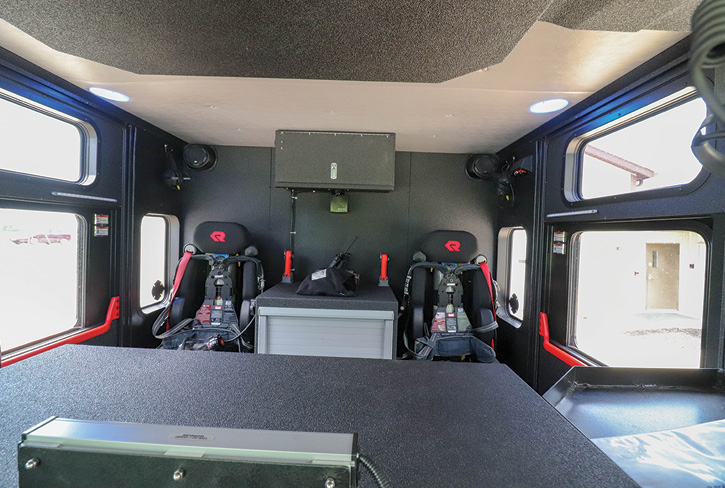 7 The crew cab on the rescue-pumper has two outboard forward-facing H.O. Bostrom seats with a cabinet between them. Behind the driver’s and officer’s seats are two gear compartments, accessible from the exterior. 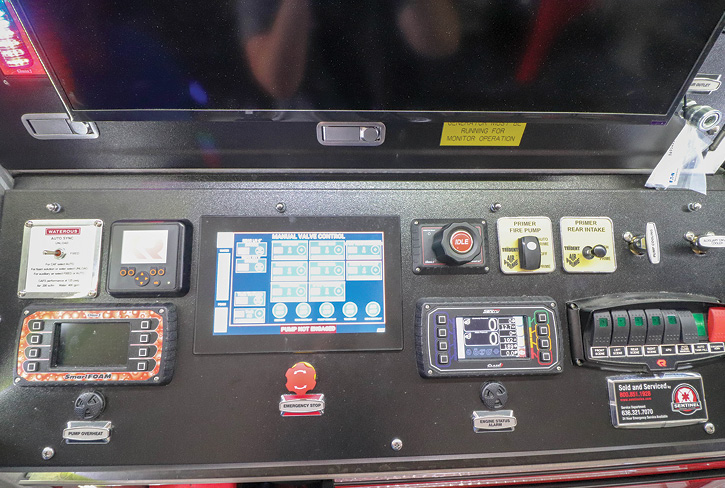 8 A closeup of the SAM Control System on the rear-mount rescue-pumper.

9 Two 1¾-inch handlines are deployed from the front bumper of New Melle’s rescue-pumper during a fire. [Photos 8-9 courtesy of the New Melle (MO) Fire Department.]

10  New Melle’s rescue-pumper operates at the scene of a nighttime structure fire.

The rescue-pumper also features a curbside awning over the pump panel at R4, which has pull-out drawers in the lower cabinet for adapters, Franz points out. “We also have a 10,000-pound Warn winch with receivers on all four sides of the truck, ROM roll-up doors, a ProVison 360-degree camera, a Command Light Knight 2 light tower with six 750-watt FRC Optimum LED light heads, eight FRC Spectra LED scene lights with three on each side of the body and two on the rear, an FRC Spectra brow light, Power Arc emergency lighting, and a train locomotive air horn to get noticed by inattentive drivers,” he says.

The New Melle rescue-pumper has been in service since May 2019, and Massey says the department’s experience “has been very good with it. With SAM, it is much easier to learn how to pump the vehicle, and by using the wireless tablet, the operator can run the deck gun and the pump at the same time, freeing up a firefighter for other tasks.”