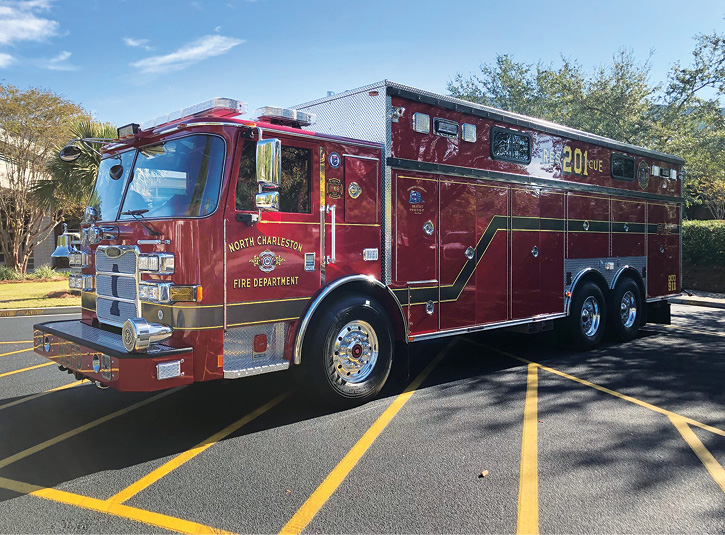 The North Charleston (SC) Fire Department had standardized its fleet with apparatus made by Pierce Manufacturing and sold and serviced by Spartan Fire & Emergency Apparatus, so when the department wanted another rescue truck that also could function as a technical rescue vehicle, it again turned to Pierce and Spartan Fire.

Stephen Feinberg, North Charleston’s assistant chief, says the new Pierce walk-in heavy technical rescue truck replaced a 2008 American LaFrance rescue that ran out of the department’s Station 3. “We had purchased a Pierce heavy rescue in 2011 and based the specs of our new rescue on that one, with a number of variations that allow it to be used for technical rescues,” Feinberg says. Those variations include carrying rope rescue equipment, Paratech air bags for some collapse situations, an array of Genesis hydraulic rescue tools, ladders, multiple types of saws, support tools for confined space entry, a portable breathing air unit, and hazmat equipment.

Alan Axson, sales representative for Spartan Fire & Emergency Apparatus, notes that another of the changes North Charleston made from its previous rescue was the placement of two air-conditioning units recessed into the top of the vehicle’s cab. “The comfort of their personnel is important to them, so they added the Coleman air-conditioning units, which can be run on scene by a generator on the truck or plugged into a shore line in the station to keep the box cool and ready for a quick response,” Axson says. “The rescue’s 30-kilowatt Onan generator handles the on-scene power for the units, as well as powering a Command Light tower and other electrical needs on the truck.”

2 The North Charleston technical rescue is powered by a Cummins 505-hp X15 engine and an Allison 4000 EVS automatic transmission and has a Jacobs engine brake.

Service area: The department provides fire protection and emergency medical services (EMS) to the city of Charleston, South Carolina. The department is responsible for an area of 109 square miles with more than 135,000 residents.

Bill Proft, Pierce’s business unit director of rescue products, says the technical rescue is built on an Arrow XT™ chassis with a two-door Arrow XT cab and has seating for five firefighters in the walk-in rescue body that’s accessed from the rear. The rig is powered by a Cummins 505-horsepower (hp) X15 engine and an Allison 4000 EVS automatic transmission and has a Jacobs engine brake. Wheelbase on the technical rescue is 211 inches, overall length is 35 feet 2 inches, overall height is 11 feet one inch, and it has a Meritor 21,500-pound front axle with a same-rated spring suspension and a Meritor 40,000-pound rear axle with a 48,000-pound Hendrickson air ride suspension.

Proft notes that the vehicle has a transverse compartment immediately behind the cab that accommodates a Stokes basket, backboards, and a Model 17 Little Giant ladder, while a storage area under the bench seat in the rear walk-in section holds a 24-foot two-section extension ladder, a 12-foot roof ladder, a 10-foot folding attic ladder, and pike poles. The walk-in area also has a heating/air-conditioning unit on the forward wall that is powered by the vehicle’s chassis engine and a skylight and escape hatch centered in the rooftop. “The walk-in area has cargo netting in front of each of four cabinets that have adjustable shelves,” he says, “to allow the area to be used for tool storage, as well as for rehab of firefighters.”

3 Immediately behind the technical rescue’s cab is a transverse compartment that holds a Stokes basket, backboards, and a Model 17 Little Giant ladder. (Photos 3-10courtesy of Spartan Fire & Emergency Apparatus.)

4 The end compartment on the driver’s side of the rescue holds a two-bottle SpaceSaver® air filling station with an air control panel arranged vertically alongside.

Proft adds that the driver’s side rear compartment holds a two-bottle SpaceSaver® air filling station with an air control panel arranged vertically alongside, with a booster pump on a tray immediately above the fill station and a high-pressure air reel. Four air cascade bottles are stored vertically, two on each side of the compartment up against the rear bulkhead and protected by tread plate covers so they don’t get banged up.

Feinberg points out that the technical rescue is set up to carry hydraulic extrication tools on both the driver’s and officer’s sides. “The D5 and P5 compartments each hold two hydraulic hose reels with 100 feet of dual hose, along with Genesis spreaders, cutters, rams, a combi tool, and a Paratech air bag system,” he says. “The D4 compartment has an electric cord reel with 200 feet of 10/4 cord in it, while the P4 compartment has 200 feet of 10/4 cord on an electric cord reel and a low-pressure hose reel.”

5 Both the D5 and P5 compartments hold two hydraulic hose reels with 100-feet of dual hose, along with Genesis spreaders, cutters, rams, and a combi tool.

7 The officer’s side of the Arrow XT cab on the heavy technical rescue truck.

8 The interior of the walk-in section of the technical rescue seats five self-contained-breathing-apparatus-outfitted firefighters.

9 A command area is built into the shelving on the inside of the walk-in area.

10  Entry to the walk-in section of the technical rescue truck is through the rear of the vehicle.

The vehicle also has a 9,000-pound Warn winch that can be placed in any of three receivers, one on each side and one at the front, Feinberg says. “We carry rope rescue gear for high-angle rescue,” he adds. “In our district, we cover the Dentyens Shipyard, which has very large ships, and we’ve had rescue calls there where we might have a victim seven decks below in a confined area that we need to use rope to secure the victim. We also have throw bags and other water rescue equipment, including personal flotation devices (PFDs) for each crew member on the rescue.”

Lighting on the heavy technical rescue truck consists of the Command Light tower, a Whelen Pioneer LED spot and flood brow light, a Roto Ray light at the front, three Whelen Freedom LED light bars with one long one across the front of the cab and one short one on each side, Whelen emergency lighting, and six Whelen Pioneer LED spot and flood lights (two on each side and two at the rear).

ALAN M. PETRILLO is a Tucson, Arizona-based journalist, the author of three novels and five nonfiction books, and a member of the Fire Apparatus & Emergency Equipment Editorial Advisory Board. He served 22 years with Verdoy (NY) Fire Department, including in the position of chief.