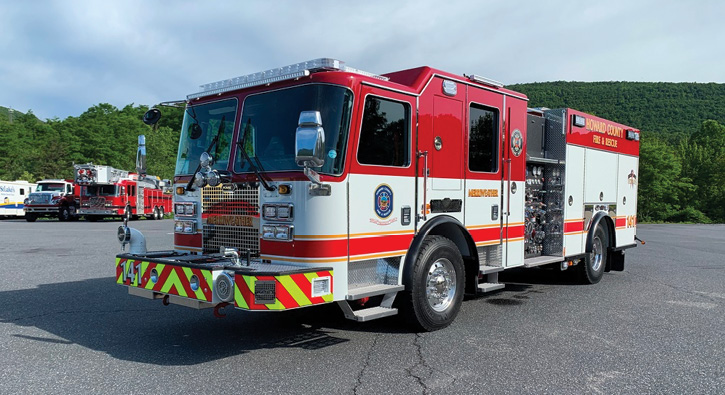 The Howard County (MD) Department of Fire and Emergency Services is in the process of making its fleet of apparatus into clean-cab-concept vehicles and has taken delivery and put in service its first clean cab pumper.

Martin LePore, battalion chief for the department’s Bureau of Logistics, says that a year and a half ago the department’s then assistant and now current chief Christine Uhlhorn spearheaded the move to the clean cab concept for new vehicles and retrofitting existing rigs. “We did a lot of research, met with departments in Florida like Coral Springs Fire Department to hear about their experience in implementing the clean cab concept, and because there is no NFPA standard on it came up with what we felt would meet our organization’s needs for clean cabs,” LePore says.

LePore notes that the department evaluated a number of fire apparatus manufacturers and chose three to build its first clean-cab-concept pumpers: KME, E-ONE, and Spartan ER.

“The KME pumper is the first one delivered to us and is already in service,” LePore says, “and the E-ONE and Spartan ER clean cab pumpers will be coming into service soon. All of the three brands are virtually identical pumpers with the same style cab interiors, pumps, water and foam tanks, and foam systems.”

Tim Allaband, vice president of the fire and rescue group at Matheny Fire & Emergency, who sold the KME pumper to Howard County, says the KME clean-cab-concept pumper has a 100-inch-wide Severe Service XLFD cab with 10-inch raised roof with seating for five firefighters in USSC Valor non-self-contained breathing apparatus (SCBA) vinyl seats, a RollTek safety system, front and side air bag protection, and a 143-inch rescue-style pumper body made of 12-gauge 304 stainless steel. The body has full-height and split-depth compartments on each side and roof compartments on the officer’s side. EMS cabinets on the driver’s and officer’s sides are located forward of the crew cab doors and accessible only from the outside.

The pumper has a parabolic front suspension, 20,000-pound Meritor front axle, and 24,000-pound Meritor rear axle and is powered by a Cummins 450-horsepower (hp) engine and an Allison 3000 EVS automatic transmission. It carries a Hale 1,500-gallon-per-minute (gpm) single-stage pump, a 500-gallon water tank, a 30-gallon foam tank, and a FoamPro 2001 foam system. Wheelbase on the rig is 191 inches, overall length is 31 feet 6 inches, and overall height is 9 feet 4 inches.

Howard County, Maryland, is located between Baltimore City and the District of Columbia, LePore points out, and provides and receives automatic aid to and from its surrounding departments in Prince George’s, Anne Arundel, Baltimore, Carroll, Montgomery, and Frederick counties. One of the requirements of the clean cab pumpers was that they be outfitted in the same configuration so there would be no confusion when firefighters move from one engine to another. However, LePore says, “The engine company captains are allowed to determine which area on the engine is used to store contaminated fire gear that is transported back to the station for decontamination and cleaning.”

3 The unit is powered by a Cummins 450-hp L9 engine and an Allison 3000 EVS automatic transmission with a parabolic front suspension, a Meritor 20,000-pound front axle, and a Meritor 24,000-pound rear axle.

He continues, “We are focused on getting the environment our firefighters operate in free of carcinogens on the rig, so that means no SCBA in the cab, no contaminated turnout gear in the cab, and cleanable surfaces on the interior where we have the ability to wash out dirt and contaminants that might be stuck in corners. We also went with vinyl coverings instead of fabric.”

LePore notes that the new clean cab pumper has sealed compartments over each wheel well and also a transverse behind the cab. “The transverse holds SCBA in Zico brackets on slide trays and also thermal imaging cameras, hand lights, irons, and hooks in Zico brackets,” he says. “On the officer’s side at the pump panel dunnage area, we have a nozzle with a garden hose fitting that’s plumbed through a heat exchanger to make hot water that we use with our decon pack. We gross decon turnout gear at the scene, then bag the gear to transport back to the station for extracting and washing.”

William Gray, regional sales manager for KME, points out that the KME clean cab pumper uses a HEPA filtration system for the interior of the cab and also has an autoclave system, which is a nozzle inside the cab that sprays an antibacterial substance used to clean the cab and other equipment. “All the surfaces in the cab are wipable to make them easy to decontaminate,” Gray says.

Allaband points out that the pumper has three 1¾-inch crosslays of 200 feet each that are connected to officer’s side pump panel discharges instead of chicsan connections, 150 feet of 1¾-inch hoseline in the front bumper, and at the rear of the rig 200 feet of preconnected 2½-inch hose tipped by a Task Force Tips Blitzfire nozzle and two preconnected 1¾-inch attack lines of 300 feet each.

LePore adds that the pumper has a Task Force Tips (TFT) Apollo deck gun on a TFT 18-inch Extend-A-Gun, and the vehicle’s hosebed carries 1,000 feet of 4-inch large-diameter hose (LDH) and 600 feet of 3-inch supply line. The hosebed is covered by a Lock-N-Load™ hosebed cover. Ladders are carried in a side tank-enclosed ladder storage tunnel above the low-side compartments on the officer’s side.

LePore says that Howard County is having a fourth clean cab pumper built by Seagrave Fire Apparatus that will be the same as the first three rigs with the exception that the officer’s side of the rig is traditionally set up with an officer’s side pump panel and ladders hung on an open rack above the low side compartments.