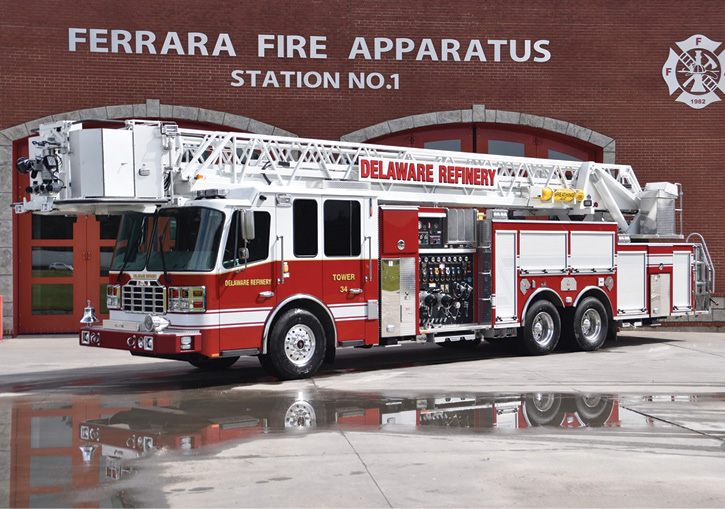 Delaware City (DE) Refining Company was in the market for a new industrial aerial platform, and the company’s fire chief says they were looking for a “Swiss Army Knife” style of apparatus that could handle a variety of situations. Delaware City turned to Ferrara Fire Apparatus to build the industrial platform it was looking for.

“We wanted a big pump and high volume of water capability through the waterway and also for it to carry a Williams Hot Shot 2 foam system and have a lot of rescue capabilities,” says Delaware City Chief Ron Dietrick. “The new aerial platform was going to replace a 1978 Pemfab 85-foot aerial ladder that had been refurbished in 1996, and we wanted to be sure the new truck would be a Swiss Army Knife apparatus for us.”

“The refinery didn’t need extremely high flow capability but rather needed rescue capabilities,” Williamson observes. “We gave them the ability to attach a Stokes basket to the platform and added a rappelling arm system and a pair of 500-pound lifting eyes. They also had very particular requirements for storage of rope rescue bags and other equipment that we had to integrate into the storage capabilities on the truck as well as add a tripod storage area in the torque box ladder tunnel.”

Service Area: The department provides fire suppression and rescue in a 5,000-acre oil refinery that produces approximately 210,000 barrels of products per day, stored in more than 100 storage tanks.

Dietrick notes, “We were very picky with how we wanted the truck put together. We had the interior of the cab and all the compartments sprayed with Ferrara’s F-Shield treatment because of its durability and ease of cleaning. And, we chose the 100-footer because it’s a good platform for rescue work, where we could fully equip it with rescue tools, a Stokes basket, ropes, and hardware.”

He adds that while the aerial has a 2,000-gpm Task Force Tips Monsoon monitor with a TFT VUM (valve under monitor) on the front of the platform, “Our rig is a little different than a typical aerial platform because it has an additional Task Force Tips Monsoon monitor with a TFT Extend-A-Gun at the midship point of the truck on the officer’s side. That gives us a lot of flexibility if we are facing a fire where we might have to protect an exposure while operating the aerial on a tank where we need its reach or to get over pipe racks.”

4 A 2,000-gpm Task Force Tips Monsoon monitor with a VUM is mounted at the front end of the platform.

5 The industrial aerial platform has a second monitor, a Task Force Tips 2,000-gpm Monsoon, mounted at the midship point of the truck on the officer’s side.

Dietrick says, “In a refinery, there are places where there’s not a lot of good lighting, so we made sure to spec a lot of LED lighting on the aerial.” The rig carries an 8-kW Onan hydraulic generator, Whelen LED warning light package, Whelen LED scene lights on the sides of the body, telescoping lights, brow lights, and eyebrow lights on the front of the platform.

Dietrick notes that Delaware City Refining Company, which has approximately 570 employees, has the capability to process a diverse heavy slate of crudes with a high concentration of high sulfur crudes, making it one of the largest and most complex refineries on the East Coast. The refinery has the ability to accept crude oil by rail or waterborne cargoes and has an extensive distribution network of pipelines, barges and tankers, trucks, and rail for distributing its refined products, which include distillates, gasoline products, butane, and propane, among others.

The refinery is a member of an industrial fire group in the area that includes five other terminals and refineries that have mutual-aid agreements to assist one another. “We each have very large cache of high-volume pumps, dry chemical, foam, and high-flow apparatus,” Dietrick says. “We also give and receive mutual aid from volunteer fire departments in Newcastle County, so we have Storz fittings for large-diameter hose and adapters to their hose, as well as smaller-diameter national standard thread couplings.”

Williamson points out that Delaware City Refining Company also had Ferrara build it a light-duty rescue truck after it finished the aerial platform. “The rescue is built on a Dodge 550 chassis with a four-door cab but with the rear seats removed so we could install a command board and emergency medical services cabinets,” he says. “The rescue has an extruded aluminum utility body with a full transverse compartment behind the cab and a walk-around compartment after that. The back of the rescue is open, like where you would typically put a skid unit, but will be used to haul large manifolds and other big water moving equipment.”