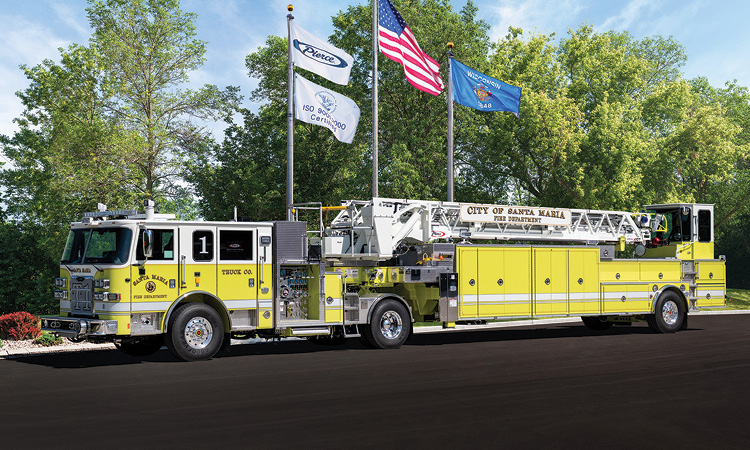 The Santa Maria City (CA) Fire Department had seen a big housing boom in the city and wanted to replace its 110-foot 1999 Hi-Tech LTI aerial ladder that had 100,000 miles on it. While the department was waiting for funding, it formed a seven-person truck committee that researched aerial manufacturers and neighboring fire agencies to determine the various truck options available.

The department was able to get an Assistance to Firefighters Grant for $988,410 in July 2017, and the city came up with the rest of the money to make up the $1.4 million purchase price for a Pierce Manufacturing Ascendant® 107-foot heavy-duty tiller quint.

Christopher Rehs, a Santa Maria City captain and member of the truck committee, says the Pierce Ascendant is the department’s first tractor-drawn aerial (TDA). “The biggest advantage of the tiller is its maneuverability,” Rehs points out. “With the turntable in the middle of the truck, we can access areas in our city that our straight stick couldn’t, and it lets us get in a lot closer in tight-access places like a college campus and various apartment buildings.”

Tim Smits, senior sales manager for aerial products at Pierce Manufacturing, notes that the tiller quint concept is becoming more popular around the country. “With many departments trying to do more with less, the value of a TDA with a pump, a water tank, 500 cubic feet of compartment space, and the ability to carry up to 260 feet of ground ladders can’t be underestimated,” Smits points out. 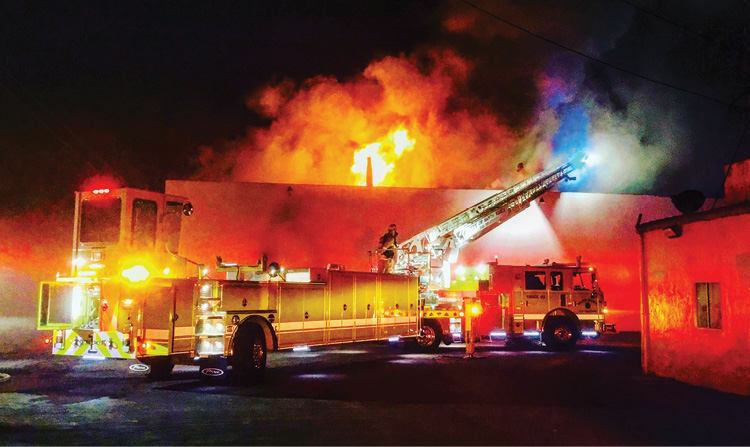 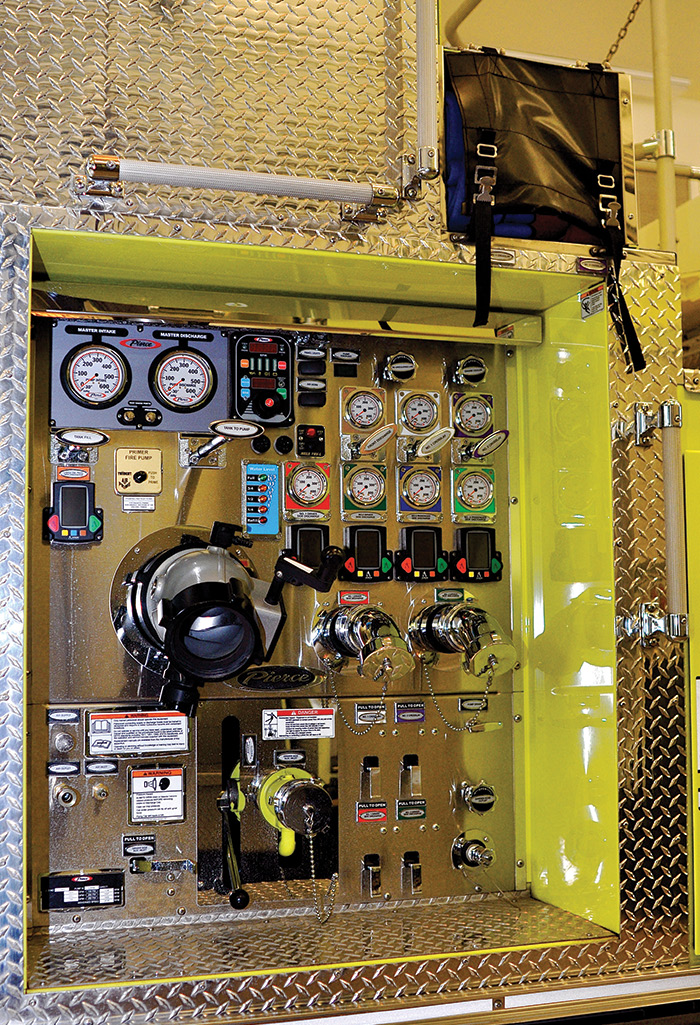 The tiller truck for Santa Maria City is powered by a 565-horsepower (hp) Cummins X15 engine and an Allison 4000 EVS automatic transmission, Smits says. It carries a Hale DSD 1,500-gallon-per-minute (gpm) single-stage pump, a 300-gallon water tank, and a 6-kW Onan hydraulic generator. Wheelbase on the tractor is 183 inches, wheelbase on the trailer is 362 inches, the vehicle’s overall length is 61 feet 7¾ inches, and its overall height is 11 feet 2 inches. The aerial has a 107-foot vertical reach and a 100-foot horizontal reach and can operate from -10o to +77o. 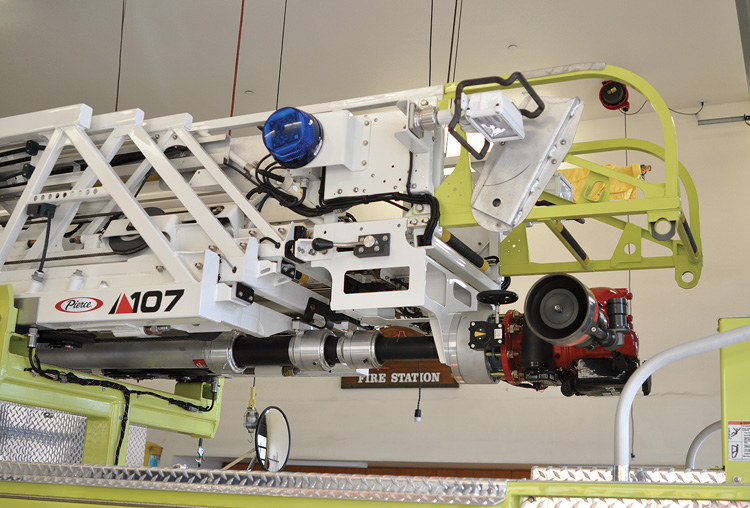 4 The monitor at the tip of the tiller quint is an Akron StreamMaster 1,500-gpm model. 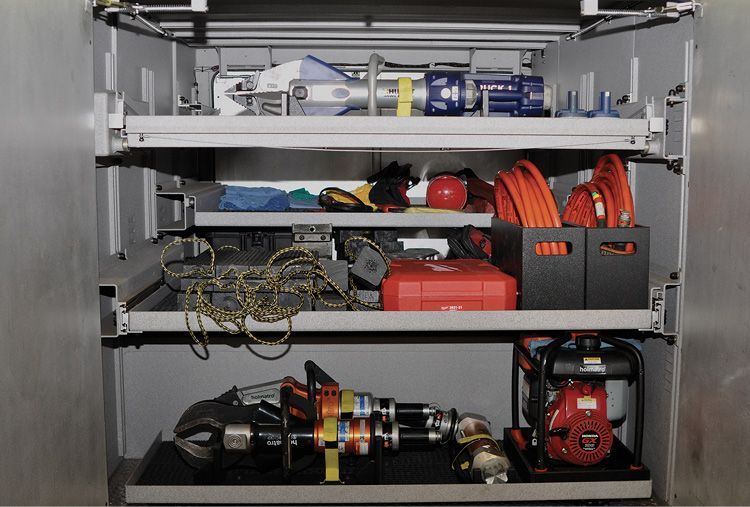 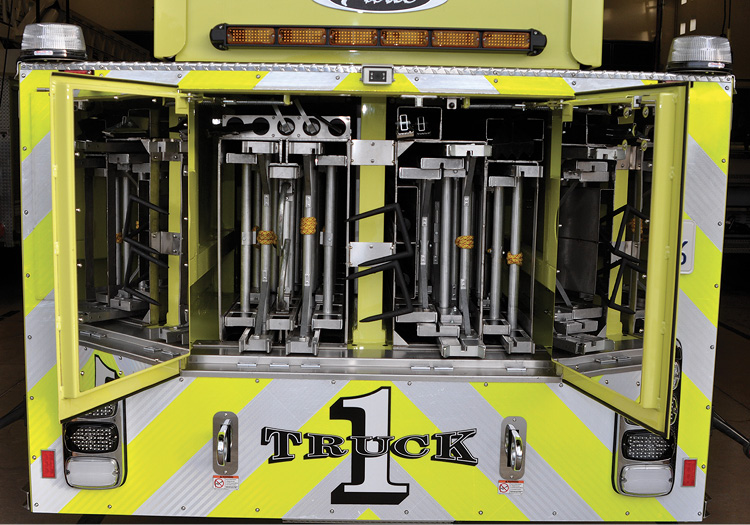 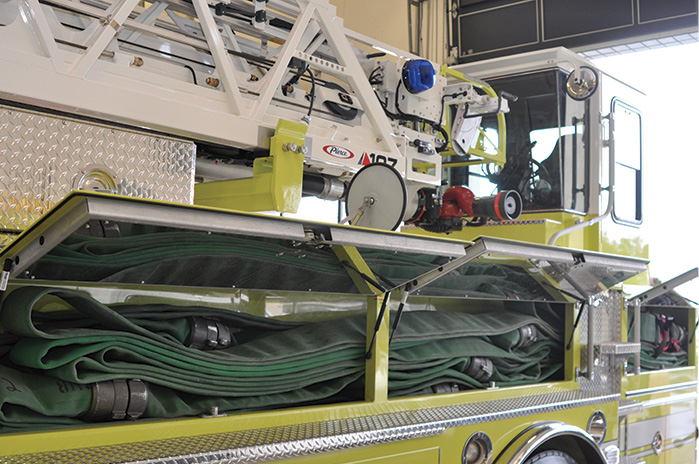 7 The hosebed on the driver’s side of the tiller quint carries 600 feet of four-inch LDH. 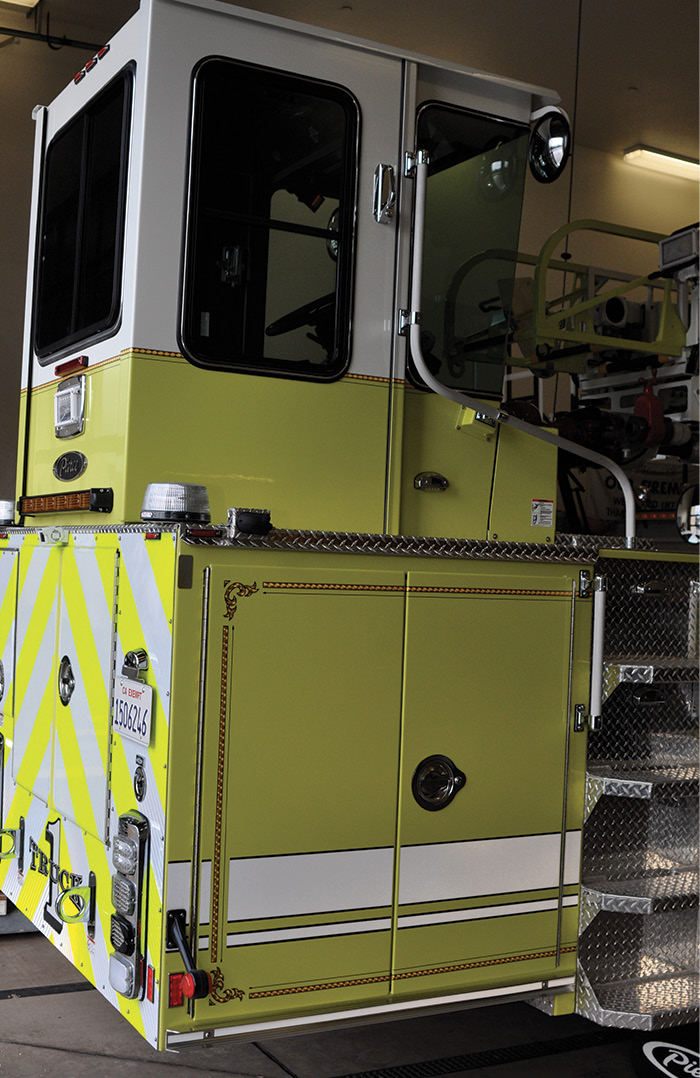 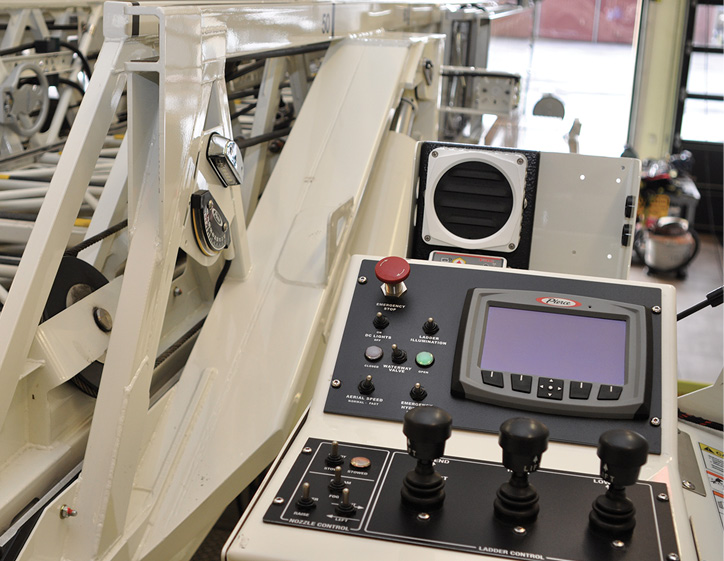 9 The aerial controls at the turntable.

Rehs says that compartment space was another important consideration for Santa Maria City’s truck committee when choosing the tiller. “We carry a full complement of Holmatro hydraulic tools and HURST eDRAULIC tools on the truck, as well as three different rope systems,” he says. “We got the built-in rigging system at the tip of the aerial where we can run a high pick point or do a flying Stokes, and we also have a rope tie-off bar at the base of the aerial.” Also at the tip of the ladder is a 1,500-gpm Akron 3480 StreamMaster monitor and a Whelen Micro LED scene light.

Another advantage to the tiller quint, Rehs says, is its faster setup time. “With two outriggers instead of four, we have seen a huge difference in our setup time,” he points out. “And, the overall outrigger footprint of the tiller is smaller than our previous truck; it weighs less, has a shorter overall length, and has greater visibility.” In addition, he says, the driver’s side hosebed carries 600 feet of four-inch large-diameter hose. 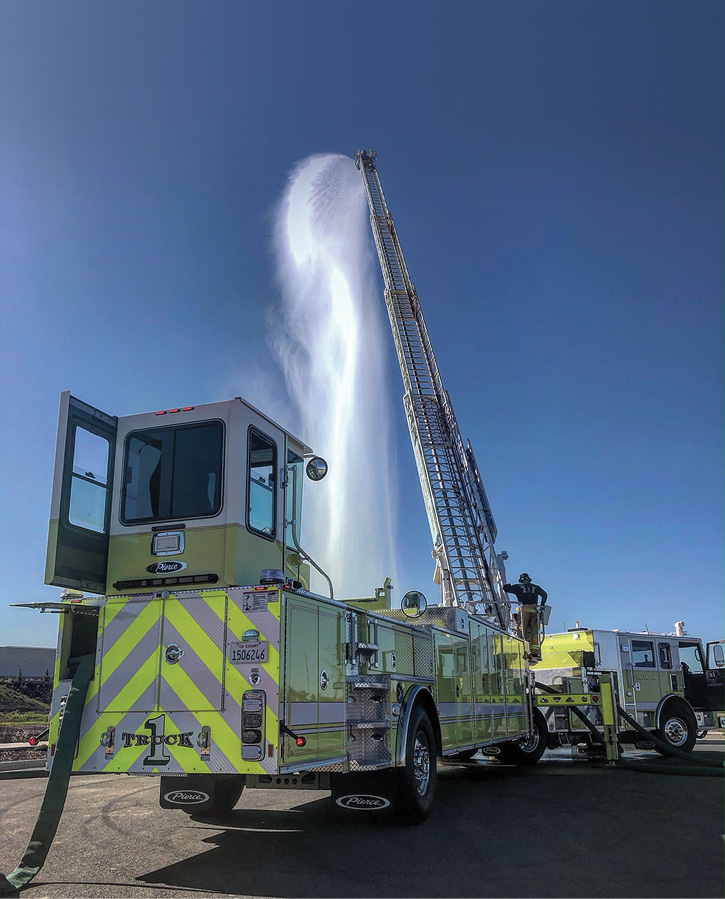 10 The tiller quint flows water through its master stream during a drill.

Rehs notes that one of the biggest hurdles Santa Maria City had to overcome was getting everyone trained to drive the tiller. “It requires a driver-operator 1A and a commercial driver’s license,” he says, “and an engineer who can drive one of our engines has to be tiller-qualified in order to drive only the tractor. We wanted to start out with a culture of safety with the new tiller, so we partnered with Response Training Group in Seattle, Washington, for a week-long class to train the trainers. And, the Orange County (CA) Fire Authority and the Oxnard (CA) Fire Department each loaned us a tiller so we could start driver training.”

The Pierce tiller quint went into service in July 2018 and runs first out on fires, rescues, and medical calls from Santa Maria City’s Station 1, its busiest station. Rehs adds that the tiller “has been a workhorse from the day it went in service. That first day in service we had a large defensive fire where we used the master stream,” he says. “It has worked a large furniture store fire for master stream work and at other fires to put firefighters on the roof.”