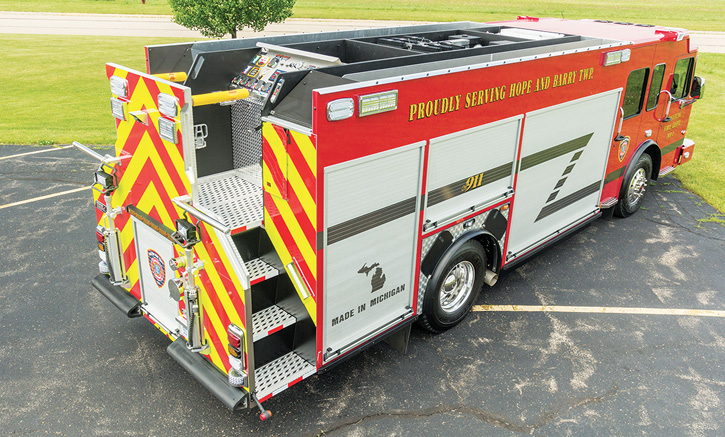 The often-overused quip, “If you’ve seen one, you’ve seen them all,” may apply to generic classes of civilian pickup trucks and vans, but it certainly doesn’t apply to fire engines being turned out by apparatus manufacturers around the country.

Pumper makers say that unless it’s a fleet order for a large fire department, then no two pumpers are exactly alike because departments often are asking for unusual and out-of-the-ordinary design elements or equipment to meet their particular needs.

Ben Bregg, design engineer for Spencer Manufacturing Inc., says his company’s designers have been experiencing a combination of factors put forth by fire departments for inclusion in their apparatus, specifically issues relating to safety, staffing, equipment, water-carrying capability, and pump capacity. “Some of the safety considerations affect the operator’s position on the vehicle for visibility, access ladders to the top of a pumper, and hosebed height,” Bregg says.

2 For the Hadley Township (MI) Fire Department, Spencer Manufacturing built this custom pumper with an IDEX Fire & Safety SAM™ control system with control panels on both sides behind roll-up doors, a Hale Qmax 1,500-gpm pump, an 1,800-gallon water tank, a low hosebed, and full-depth rescue compartments on both sides.

3 This top-mount/rear-mount custom pumper was built by Spencer Manufacturing for the Delton (MI) Fire Department.

4 The Big Prairie (MI) Fire Department had Spencer build this top-mount/side-mount pumper with a raised pump panel facing the midline of the vehicle.

On staffing issues, Bregg notes that some departments have firefighters respond directly to a scene instead of the station, which could dictate the number of seats needed on a pumper. “If a department doesn’t have a lot of hydrants, it tends toward using larger water tanks on its pumpers,” he says, “and there’s always the issue of how much equipment a department wants to carry and whether it will be in traditional split-depth compartments or full-depth and full-height rescue compartments.”

Spencer recently built a custom pumper for the Hadley Township (MI) Fire Department, Bregg points out, with an IDEX Fire & Safety SAM™ control system with control panels on both sides, a Hale Qmax 1,500 gallon-per-minute (gpm) pump, an 1,800-gallon water tank, a low hosebed, and full-depth rescue compartments on both sides. For the Egelston (MI) Fire Department, Spencer built a pumper with a side access ladder to a full-width walkway on top of the pumper to allow for safely loading hose, Bregg says, and to shave the overall length of a custom pumper for the Big Prairie (MI) Fire Department, Spencer installed a top-/side-mount pump panel facing the midline of the pumper from the driver’s side, with two speedlays behind the cab, a 1,250-gpm pump, and a 2,500-gallon water tank.

Joe Messmer, president of Summit Fire Apparatus, says that besides rescue-pumpers, the most popular truck Summit builds is a 2,000-gallon pumper-tanker, usually with plenty of compartments to carry as much equipment as possible. “The rural and semirural fire departments gravitate toward that type of vehicle because they always need more water and want lots of compartment space to carry equipment since they often only take one truck to a fire,” Messmer observes.

In addition to large water tanks and many compartments, some departments are looking for innovative plumbing solutions on their rigs, Messmer says. “They often will have us install front or rear suctions, and sometimes both, so they can easily access a portable water tank or lay supply lines and still keep the truck in one lane of the road and not block it for other traffic,” he points out. “Likewise, on rescue-pumpers, some departments put everything they can in an extended front bumper, such as rescue tools, a couple of hydraulic reels, hydraulic tools, and a trash line.”

Mark Brenneman, assistant sales manager for 4 Guys Fire Trucks, says that “for us, there really is no ordinary pumper. People come to us when other manufacturers have told them ‘no,’ and we build them a customized custom pumper.” Brenneman says 4 Guys built a top-mount pumper for a customer where the pump panel was enclosed in the cab, but instead of being across the vehicle, it was oriented on the driver’s side along the long axis of the rig.

6 Summit Fire Apparatus installed a fall barrier at the top rear of this custom pumper built for the Winchester (KY) Fire Department.

7 Summit installed a large-diameter intake on the rear of this custom pumper for the Brooksville (KY) Fire Department.

“We built one custom pumper where the pump was behind the rear axle and the pump panel was a rear top-mount,” Brenneman points out. “The pumper had a three-step stairway to the floor of the pump panel about 4½ feet off the ground, and the panel could be covered by a hinged compartment door and a roll-up door.” Another pumper 4 Guys built, Brenneman says, was a rear-mount pumper that had two six-inch suctions off the rear. “It’s hard to fit that much plumbing into the space,” he notes, “but then that’s why we specialize in custom pumper work.”

Ken Sebo, pumper business development manager for Pierce Manufacturing Inc., says Pierce has been getting more requests from fire departments along both ocean coasts for surfboard storage for water rescue as well as storage for collapsible boats. “We’ve also built a storage area for an ice sled for a northern fire department,” Sebo says. “Most of that equipment gets stored in the hosebed area, often with collapsible boats going into coffin compartments.”

Sebo notes that the aesthetics of fire trucks are changing from chrome to blacked- out surfaces. “Line-X is becoming more popular on a pumper’s exterior surfaces,” he points out. “You’re not seeing much diamond plate anymore. We also are getting requests for colored lights, like red in compartments and under the truck, so firefighters’ night vision isn’t impaired on a scene by bright LED lighting.”

The Clean Cab Concept is slowing taking hold around the country, although it is evidencing itself in a number of ways because there currently is no standard to refer to, Sebo says. “There’s a lot of variation in what’s a clean cab,” he observes, “but almost always it means taking the SCBA out of the cab and putting them in compartments. Some are going into Ziamatic brackets bolted to the back wall of an over-the-wheel compartment, while others are on slide-out trays or mounted to the rear wall in the compartment immediately behind the cab on both sides.”

Travis Higginbotham, lead engineer for Precision Fire Apparatus, says Precision rarely builds pumpers that are identical to others. “For Narberth (PA) Fire Department, we built a custom pumper with a Hale 1,500-gpm main pump and a Hale HP 60-gpm-at-500-psi high-pressure pump,” Higginbotham says. “Antonia (MO) Fire Department had a station engine bay size that meant their new pumper had to be less than 31 feet overall length, so we built them a rear-mount pumper with 1,000 gallons of water with a pump panel only 34 inches wide in the curbside rear compartment and three speedlays in transverse L1/R1 compartments. Because of space constraints, we had to put on a pullout tail board and recess mount a Zico rear ladder.”

Todd Nix, apparatus consultant for Unruh Fire, notes that Unruh has seen some activity on transverse hose loads in enclosed compartments. “We built a rescue-pumper for Cub Run (KY) Fire Department that has the pump panel in the L1/R1 compartment behind a door with two preconnects and one dead load on top of the pump that can be pulled from either side of the pumper,” he says.

10   Self-contained breathing apparatus (SCBA) were mounted on slide-out-and-down trays above the wheel well for this clean cab custom pumper that Pierce Manufacturing built.

11 Blacked-out pump panels, wheels, bumpers, and rub rails are gaining in popularity as on this Pierce Manufacturing-built custom pumper for the Nimishillen (OH) Fire Department.

13 This small attack pumper built by Precision for the Scott Township (PA) Fire Department is on a Ford F-554 chassis where the front axle was upgraded to allow the truck to handle a 22,500-pound gross vehicle weight rating so it can carry a 1,350-gpm pump, 300 gallons of water, 30 gallons of foam, and an array of equipment.

15  Spartan ER built this custom pumper for the Port Authority of New York and New Jersey with a 1,500-gpm pump, a 1,000-gallon water tank, a 2,000-gallon foam tank, a Purple K pressurized dry chemical system, and a 21-foot boom appliance that can be operated over median barriers inside tunnels. (Photo 15 courtesy of Spartan ER.)

Wyatt Compton, product manager for emergency response at Spartan ER, says that “as a custom manufacturer, nothing really surprises us. The design is usually more the combination of the items to go on the pumper rather than the layout itself.” Compton notes that many departments choose a custom chassis to keep the wheelbase of the vehicle as short as possible. “The pumper’s design depends on the department’s needs, like hauling a lot of rescue equipment, or a large amount of water, or being able to work off the front or rear of the truck, like at a motor vehicle accident scene where the pumper has to set up in one lane and use its rescue tools off the front and be supplied with water through a rear suction at the back.”

Compton says that Spartan ER recently built a custom pumper for the Port Authority of New York and New Jersey. “They have a unique operating situation with the Lincoln Tunnel between New York City and New Jersey,” he says, “where there are manpower, interagency, and hazardous materials issues. We built them a custom pumper on a tandem-rear-axle chassis with a 1,500-gpm pump, a 1,000-gallon water tank, a 2,000-gallon foam tank, and a Purple K pressurized dry chemical system. The pumper has a 21-foot boom appliance that can be operated over median barriers to get across different lanes of traffic.”