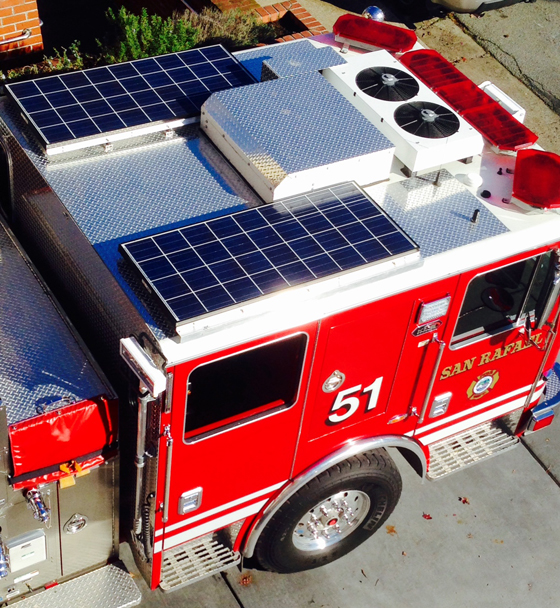 Solar power has made deep inroads in various forms across the nation to heat water and power electrical equipment in homes and businesses, so it’s no surprise that solar-powered systems are turning up on pumpers, rescues, ambulances, and other specialty fire vehicles.

Apparatus manufacturers install some of these systems while departments sometimes handle the installs.

Christopher Gray, chief of the San Rafael (CA) Fire Department, says his department has experienced problems with its fleet’s batteries, replacing both batteries and alternators at significant cost. “In 2007, we converted one engine to use a solar system that functioned by charging the vehicle’s batteries and augmented the normal electrical use by the engine,” Gray says. “We found that it extended the battery and alternator life of that engine.”

The department then decided to outfit its entire fleet with solar systems, which at the time consisted of six engines, two ladder trucks, four medic units, and three command vehicles. Gray notes the most recent pumpers San Rafael purchased, two new KME-built vehicles, were prewired by KME to the department’s specs for the solar systems. San Rafael also is purchasing an aerial ladder from Pierce Manufacturing that will be set up to accept solar panels, he adds.

Gray notes that the solar panels on his emergency vehicles capture both sunlight and fluorescent light and even work under skylights in the vehicle bays. “You don’t need all that much light to generate electricity with these units,” he points out. “We also developed a really good mounting system for the panels that holds up to lengthy trips when our vehicles go out of the county and on mutual aid.” Gray says San Rafael has found great success by gluing the thin solar panels directly to sheets of aluminum that it can then attach to a cab roof.

San Rafael’s first solar panel installations provided about 7.5 amps from two panels on an engine when it was parked outside, Gray says. “The normal draw for all the equipment when the engine is not running or plugged into a charger is usually less than 10 amps, so we were able to cover that nicely with two panels that put out 3.75 amps each. The solar panels we’re installing now are putting out 10 amps per panel. The newer panels are much more efficient and also are smaller and thinner.”

Departments must make one accommodation in the vehicle’s design if it is destined to have a solar system, Gray says. “You have to ensure there is enough space available on the top of the cab for a solar panel,” he observes. “Our solar systems have made a big difference in operational efficiency for our department, and their use also falls in line with the climate change action plan our city has in place.”

In terms of cost, Gray says that the equipment has more than paid for itself in less than two years by saving batteries and alternators and keeping the air cleaner by reducing idling time.

Brian Brown, bureau chief, fleet services, South Metro (CO) Fire Rescue Authority, says South Metro has had problems with batteries going dead in medic units as far back as 2004. “We replaced a lot of batteries in our units and investigated the causes, looking for parasitic amp loads, but couldn’t find anything significant,” Brown says.

The solution came from Brown’s camper that was prewired for a solar panel. “It worked great, and we never had any battery problems with it,” he says. “So, we got three solar panels to deliver the amps we wanted to generate and put them on top of the patient compartment on one of our medic units.” The solar panels solved the dead battery problems.

South Metro began buying solar panels from a local RV dealer and installed them on its ambulances and other vehicles. “Inside the firehouse with the fluorescent lights on, we were generating about 12.5 amps,” Brown points out. “Outside in the sunlight, in winter, we’d generate 10 amps and in summer between 17 and 18 amps.” Brown notes that the medic units all have saline coolers, narcotics vaults, radios, chargers, and other electrical equipment that were parasitic loads on the vehicle’s electrical system. “With the solar panels, we could recover that load on service calls and still have all electrical working properly,” he says.

South Metro installs Go Power Solar panels on its vehicles. “We install them ourselves,” Brown says. “Each panel generates 9.14 amps and is 28 inches wide by 62 inches long. Three panels are daisy chained across the top of the medic unit and together generate 27.42 amps with a solar load controller capable of 30 amps maximum.” Brown says South Metro created aluminum blocks that were drilled and tapped into the solar panels. “We used structural body adhesive on the aluminum plate, and then the panels were screwed into the plate, so we have no problems with whistling or vibration.”

South Metro has outfitted 16 ambulances with solar panels. It also fits a single solar panel that generates between five and seven amps on an array of different vehicles-its training chief’s Chevy Tahoe, three safety officer Ford F-250 pickups with caps covering the beds, and five battalion chief Chevy Suburbans. “The cost for three solar panels and their installation runs between $1,800 and $2,200,” Brown says. “With a battery monitor and digital display for the vehicle, it’s about $2,500. For a single panel, the cost is between $1,200 and $1,500.”

James Shamard, chief of staff at Austin-Travis County (TX) EMS, says Austin-Travis County has worked with Wheeled Coach to develop a solar system for its ambulances. The systems the county first installed generated 10 amps of power to run the rigs’ electrical equipment and mobile data units. On a scene, the solar panels would charge the vehicles’ batteries. When waiting at a hospital with the engines off, the panels powered battery conditioners that ran the electrical systems.

Scott Lindsley, Austin-Travis County’s commander of fleet facility management, says the intent was to reduce a vehicle’s engine idle time, especially after a unit had delivered a patient to a hospital and the rig sat idling outside for 20 or 25 minutes. “However, the difficulty with the solar panels is that it has to be daylight for them to be used outside, and they can’t function under an awning, like you find at many hospitals,” Lindsley says.

Chad Newsome, national sales manager for PL Custom Emergency Vehicles, says his company makes a three-panel solar power system that can be installed on ambulances it manufactures. “It works remarkably well, and we’ve offered it for a couple of years now, but less than five percent of our ambulances go out the door with a solar system,” Newsome says. “I’m surprised more departments don’t take advantage of it.”

The solar panels are two feet wide by three feet long and typically are arranged three wide across the top of an ambulance’s body module. “Each panel produces six amps of power,” Newsome says, “and they can be wired into the vehicle’s main battery. However, we like to use a deep-cycle gel battery that’s separate from the vehicle’s battery.”

Newsome says a fully charged deep-cycle gel battery will provide eight hours of life before needing a recharge. “The long-term benefits to using solar panels include not leaving the vehicle idling and leaving a cleaner footprint on the environment,” he notes. “From a service standpoint, by not draining down the vehicle’s main batteries, you increase their longevity so they won’t have to be replaced as frequently.”

Eric Fisher, vice president of engineering for Horton Emergency Vehicles, says that Horton offers customers a solar option to provide extra charging power to the vehicle’s batteries. “The panel is recessed into the roof of the ambulance, flush with the top of the roof, which protects the panel and is more aesthetically pleasing,” Fisher says. “The panel is 14 inches wide by 21 inches long and delivers 1.2 amps per hour, which is 14.4 watts. For an ambulance, that’s enough to operate seven LED dome lights and still have a surplus charge for the vehicle’s battery.”

Fisher says that Horton plans on taking solar systems further with its rigs. “The next phase is to design a solar panel system in the roof that blends into the body and provides enough amperage to do what battery chargers are doing,” he says. “Right now, we’re using 30- to 50-amp battery chargers on our ambulances.”

The larger solar system, which is still in development, will use between four and seven solar panels, Fisher estimates. “We’ll probably offer it as an independent system,” he says. “It’s likely to come out at the end of 2015 or early in 2016. Down the road, this technology might find itself on the tops of other fire vehicles with the roof real estate to carry it.”

So, is solar power the answer to increasing electrical demands on fire apparatus? Gray, thinks so. “I don’t understand why more agencies aren’t taking advantage of solar systems for their apparatus,” he says.

James Shamard, chief of staff at Austin-Travis County (TX) EMS, notes that Austin-Travis County has found what it thinks is a better alternative to using solar on its rigs. “Energy Xtreme, a military contractor, built an enclosed battery system for the Austin (TX) Police Department where the system sits in the trunk and charges when the vehicle is running, then runs all the systems when the vehicle is off,” Shamard says. “We watched their progress, and when the system deployed successfully, we asked Energy Xtreme for a system that allowed us to shut off our vehicles for an hour and still run our mobile data terminal, heating, and air conditioning, and keep all the electrical equipment charged. They developed an improved secondary battery made by their sister company Stealth Power.”

Scott Lindsley, Austin-Travis County’s commander of fleet facility management, says the Stealth Power system is made up of six one-kilowatt dry cell batteries, each about the size of a large tractor battery. “It’s like having a generator without running the motor,” he points out. “We get two hours of use out of our Stealth Power system. When a shore line is plugged in, it charges both the vehicle battery and the secondary battery, which has an emergency start switch. If everything is dead, the bottom 25 percent of the secondary battery is reserved to start the vehicle if necessary.”

Shamard notes that all of Austin-Travis County’s new Wheeled Coach ambulances are getting the secondary battery system installed. “We have 22 current ambulances done and seven more on order,” he says. “Our total fleet is 77 ambulances.”