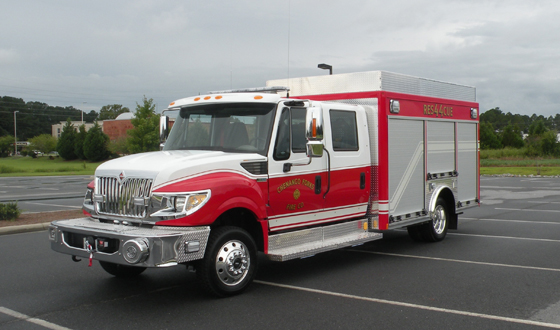 Small and midsize vehicles are filling the need for rescue trucks for some departments around the country where a combination of budgetary constraints, staffing requirements, and firehouse space means a larger rescue truck simply isn’t the answer.

Although smaller rescues may not be able to carry the same amount of equipment found on traditional heavy rescues, the smaller units are being designed to reflect the particular needs of a fire department and are built to carry the equipment necessary to get the job done.

Ed Smith, director of the emergency vehicles group for VT Hackney, notes that in the past 12 months, Hackney has quoted on more light-duty rescue trucks than it typically has in a five-year period. “The interest level in smaller rescues has dramatically increased,” Smith observes. “Reasons vary by department, but many find that it costs too much to operate heavy rescue trucks, their budgets might be pinched so they can only afford a smaller truck, and they don’t need to haul all that equipment around on every call.”

Smith points out that Hackney has been building small rescues on Ford F-550, Dodge D5500, and International TerraStar chassis. “If what a fire department wants to carry is the kind of equipment used for auto extrication and first-response emergency medical service (EMS) rescues, then those three chassis do a favorable job. The most popular chassis is the Ford, followed by the Dodge.”

Bob Sorensen, vice president of SVI Trucks, says SVI has been building smaller rescues for some time. “These typically include a four-person cab with bucket seats and a center console in the front and two firefighters, or sometimes three, in the back,” he says.

Kevin Arnold, rescue and specialty vehicle products manager for Ferrara Fire Apparatus, says he’s found that the biggest rescue trend now at Ferrara is movement toward its multivocational pumper (MVP). “Many departments are finding they are running their trucks and pumpers into the ground on EMS and rescue calls, so they are moving either to an MVP or medium- or light-duty rescue trucks,” Arnold notes. “In terms of the light-duty vehicles, we’re building them on chassis like the Ford F-550, the Dodge Ram, and the International TerraStar-all of which are less than 20,000-pound gross vehicle weight ratings (GVWRs). But, we do more medium-duty rescues, with up to 48,000-pound GVWRs, on commercial chassis like the Freightliner M2, International 4400, and Kenworth T300 or T370.”

Shane Krueger, national sales manager for Marion Body Works Inc., points out that smaller rescues typically have either two- or four-person cabs, no pump or water tank, as much compartmentation as can be fit on the body, and as much LED lighting as possible.

A step up from the smaller, less than 20,000-pound-GVWR chassis rescues are the medium-size rigs, Frederickson notes. “The mediums are usually on a Freightliner or International chassis,” he says, “and some of them even carry water tanks and one of our ultra-high-pressure pumps for initial fire suppression, like at an auto accident that turns into a car fire. Many of these small and medium rescues are being outfitted with small generators and light towers and always with lots of lighting because it is so important in rescue situations.”

Pierce Manufacturing hasn’t been as involved in building smaller rescue trucks, says Bill Proft, rescue program director. “We have not had a lot of calls for the smaller rescues recently but are building more medium-duty rescues and larger,” Proft says. “These usually are commercial-chassis products with 16- to 18-foot bodies. Departments have to identify what equipment they want on the vehicle and the capabilities the truck will need to have. Then we work with them to build a truck around their requirements.”

Shane Braun, Pierce’s sales and marketing manager for rescue products, points out that customers often want to put so much equipment on a smaller chassis that they have to bump up to a medium-duty vehicle. “The International 4400 and Freightliner M2 are examples of the medium duty chassis we build on,” Braun says. “We can put a decent size box on those two chassis-up to 24 feet in length-although the typical medium-duty body is between 18 and 21 feet long.”

Joe Messmer, president of Summit Fire Apparatus, says his company has seen an uptick in orders for small and medium rescue trucks over the past few years. “The rescue tools have been developed so much and are so much more efficient that fire departments don’t need to carry as much equipment as they did in the past,” Messmer says. “Often after a fire department analyzes its protection area and determines how often it uses particular rescue tools, it finds there are some it doesn’t need or hasn’t used and can consequently reduce the size of the rescue vehicle.”

Other reasons for moving toward a smaller rescue truck, Messmer believes, include budgetary issues and staffing problems. “Some fire departments simply don’t have the personnel to run a large rescue truck,” he notes.

Todd Nix, apparatus consultant for Unruh Fire, says his company also has seen an influx of orders for small rescue trucks. “I think it has a lot to do with budgets,” Nix says. “Money is the thing that drives everything. I’ve talked with a lot of departments in the past couple of years that have realized they can’t go with heavy rescues anymore and are downsizing their fleets.”

Nix cites general maintenance and upkeep costs of heavy rescues vs. smaller rigs and personnel issues as other reasons for the trend toward smaller rescues. “Downsizing a vehicle means one or two people can staff and respond a rescue truck,” he says, “where the heavy rescue might still be back at the station.”

In addition, Nix adds, “The mindset, in general, has changed in the fire service where it had been ‘bigger was always better,’ ” he says. “Now, departments want a functional, usable rescue truck they can fit in the station, carry what they need on it, and put it to work.”

Scott Oyen, vice president of sales for Rosenbauer, says the Sioux Falls (SD) Fire Department had Rosenbauer build a small rescue truck on a Ford F-550 chassis with front-crew-area seating four firefighters. “The body of the rescue behind the crew area has three compartments on each side and one in the rear that are set up to carry all the vehicle’s rescue tools, a Stokes and backboards, and self-contained breathing apparatus for the firefighters,” Oyen says. “They wanted a rescue that could carry the equipment they needed, which they got on this chassis with a 19,500-pound GVWR, but still was highly maneuverable.

Arnold says Ferrara recently built a small rescue truck on a Ford F-550 four-door 4×4 chassis that carries three HURST Jaws of Life eDraulic battery-operated rescue tools. “They had been using hydraulics off of a simo pump on a bigger chassis,” he points out, “but the smaller chassis limited what they could put on it in terms of weight, so they went to the eDraulic tools, which gives them a lot more room on the vehicle.”

Krueger believes there has always been an interest among fire departments in small rescue trucks. “With the integration of hydraulics and the ability to run multiple hydraulic pumps and generators, we find it’s easier to get that equipment on a smaller chassis,” Krueger says. “Of course, you’re always restricted by the GVWR, so a smaller rescue requires a lot of attention to detail to make sure you can get the equipment on the vehicle and under the weight rating.”

Although no one believes the days of heavy rescues are over, many feel that the light- and medium-duty rescues are here to stay. Messmer notes that once a fire department moves toward a smaller rescue truck, it makes it fit seamlessly into its fleet. “They buy the smaller truck and make it work for them,” he says. “I have yet to see anyone buy a smaller rescue truck and determine it was the wrong move for them.”