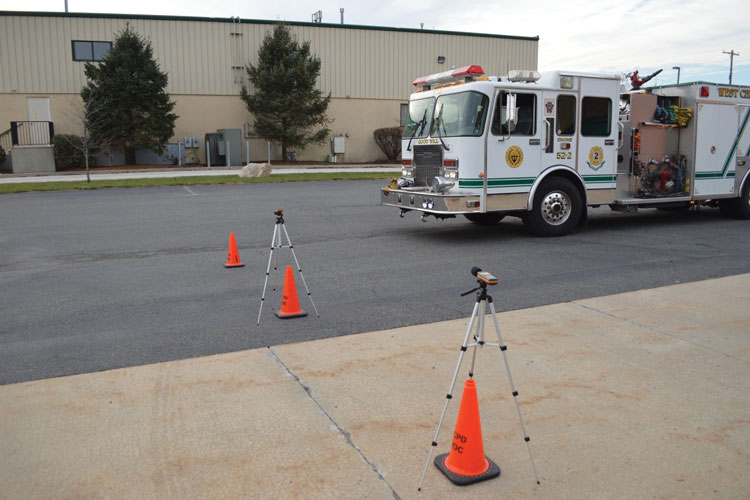 Overestimating the effective range of a siren is a common cause of fire apparatus crashes.

While siren limitations are a common cause of emergency vehicle intersection crashes, few emergency vehicle operators course (EVOC) programs address the topic. The goal of this article is to provide training ideas that will help demonstrate the limited effective range of a siren.

A vehicle driving on a road will have a substantial amount of noise inside the passenger compartment of the vehicle. This noise is known as “ambient noise.” Ambient noise will depend on several factors, including the noise from the engine, the radio, the HVAC system, and the friction of the tires rolling on the road surface. The ambient noise inside a passenger vehicle traveling 45 miles per hour (mph) usually averages around 65 decibels (dB).

The structure of a modern vehicle is designed to keep sound OUT. On average, a modern vehicle will block approximately 30-40 decibels of noise from penetrating the passenger compartment of the vehicle. This is known as “insertion loss.” If a civilian driver requires 75 decibels of siren noise to react, the siren must arrive outside the driver’s window at approximately 110 decibels, assuming an average insertion loss of 35 dB.

Most sirens are rated at around 124 dB when measured 10 feet in front of the siren. As the distance from the siren doubles, the sound pressure of the siren will drop by approximately 6 dB. This concept is known as the “inverse square law.”

Assume that a civilian driver requires 110 dB of siren noise outside the driver’s window to effectively hear a siren. Using the inverse square law, the sound pressure level of the siren will drop below 110 dB at approximately 80 feet.

If a civilian vehicle is traveling 45 mph, it will take the driver approximately 195 feet to perceive, react, and skid to a stop on a dry road once the driver hears a siren. If the driver hears the siren 80 feet away from an intersection and it takes 200 feet to come to a stop, the driver will have no time to yield the right of way should the fire apparatus pull out into the intersection. This concept explains the need for complete stops at negative right-of-way intersections.

Many students will ask, “Why not make the siren louder?” The reason sirens can’t be made louder is that a louder siren could lead to hearing problems for firefighters and disturb the surrounding public to an unacceptable level. For these reasons, the volume of an emergency vehicle siren must be limited.

It is important for EVOC instructors to provide hands-on training to reinforce the concept of siren limitations. This training can be accomplished using a sound level meter, a tripod, and an emergency vehicle siren.

To conduct the siren testing, find an open area approximately 300 feet long. I commonly use parking lots or little-used roads that can be easily shut down. Position the apparatus perpendicular to the roadway and measure 10 feet directly in front of the siren. This will be the “0” mark. From the “0” mark, students can examine several scenarios.

Once the sound measurement locations have been marked, attach the sound level meter to the tripod. The tripod should be set to around 3.5 feet, as this is a common height for a driver’s ear.

After ensuring that each participant is wearing hearing protection and standing behind the siren, have a member activate the siren. A single up and down cycle will suffice. When the siren winds down, students should examine the decibel reading on the sound level meter and record the reading. Repeat this process at each measurement mark.

Most fire apparatus are equipped with a mechanical siren, an electronic siren, and air horns. A common question students ask is, “Which siren is better?” Test each siren system individually and then test them all at the same time. More than likely, each of the siren systems will be similar.

Remember that most sirens will need to arrive at the driver’s side window of the civilian vehicle at around 110 dBA to effectively penetrate the vehicle and warn the driver. At what point does the siren system fall below 110 dBA? How far away from the fire apparatus does this occur? Would a civilian vehicle be able to perceive, react, and skid to a stop from that point?

Having demonstrated the limited effective range of a siren, it is important to correlate this newfound information with apparatus safety. If the effective range of a siren is 80 feet, how does this relate to the stopping distance of a civilian vehicle? Will a civilian be able to stop in time if the driver doesn’t hear the siren until he is 80 feet away from the fire apparatus?

Having determined where the siren sound pressure level drops to below 110 dBA, mark the spot with traffic cones. Next, have someone drive toward the cones at approximately 45 mph. When he reaches the traffic cones, have the driver stand on the brakes and skid to a stop.

Where did the vehicle stop skidding? Was it past the fire apparatus? What would have happened if the fire apparatus had pulled out in front of the car or not come to a complete stop at the red light or stop sign? Providing this type of visual reference to emergency vehicle drivers is priceless.

Although the limited effective range of a siren is a common cause of fire apparatus intersection crashes, few EVOC programs address the topic. It is important that this issue be included in all EVOC programs as both a classroom discussion and hands-on demonstration. Providing fire apparatus operators with a real-life demonstration of effective siren range is a valuable facet of any driver training program.

Author’s Note: In the February 2017 issue of Fire Engineering, there was an extensive article written on siren limitations. This article is designed to build on the lessons learned in the Fire Engineering article and provide training ideas for EVOC instructors.

I also enourage readers to view the free Webcast sponsored by Fire Apparatus & Emergency Equipment called “Siren Limitations and Intersection Crashes,” which discusses siren limitations in depth. This Webcast can be found at http://bit.ly/2kmbgK8.

CHRIS DALY is a 19-year police veteran, currently serving as a patrol supervisor in West Chester, Pennsylvania. He is an accredited crash reconstructionist and a lead investigator for the Chester County (PA) Serious Crash Assistance Team. In addition to his police duties, he has served 26 years as both a career and volunteer firefighter, holding numerous positions including assistant chief. He is a member of the editorial advisory board for Fire Apparatus & Emergency Equipment. Daly has also developed an emergency vehicle driver training program called “Drive to Survive,” which has been presented to more than 15,000 firefighters and police officers at more than 380 emergency service agencies across the United States.