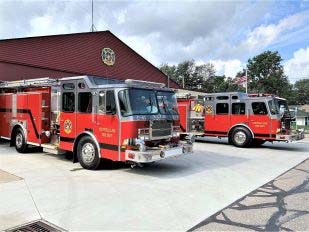 Sheffield Lake (OH) Fire Department is showing off a newly refurbished engine that underwent a complete vinyl wrap as part of the work done on the apparatus, according to a news release from the city.

The work, which cost $8,400, saved the fire department significant amounts of money as a new paint job would have cost $60,000 to complete, according to the news release.

The custom graphic work, which is found on race cars, food trucks, buses and service and sales vehicles, was done by Gorilla Graphics in Brunswick (OH), according to the release.

Engine 61 is the second engine the department had covered with a vinyl wrap as firefighters point out that the apparatus wrapped three years ago has worn well with no peeling and a similar cost savings, the release said.

Other advantages to vinyl wrap, including the ability replace sections damaged by collisions or other mishaps, is completed by adding a piece of the vinyl to the affected area and the vinyl can add years of service to the apparatus, according to the news release.