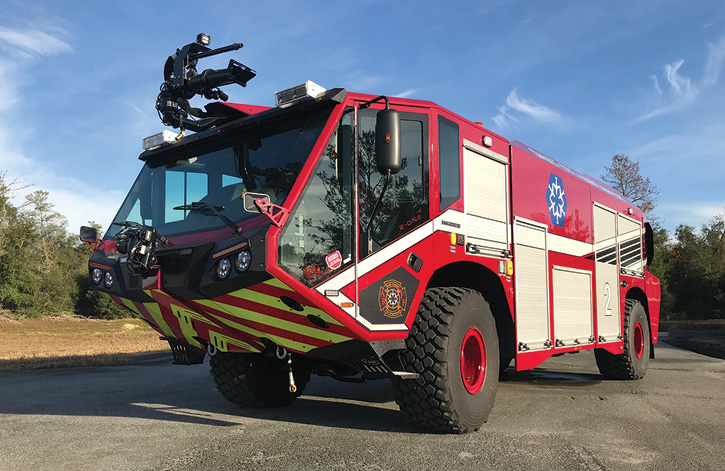 The Sault Ste. Marie Airport Fire Department in Ontario, Canada, protects the international airport with aircraft rescue and firefighting (ARFF) services covering two 6,000-foot-long asphalt runways that handle approximately 188,000 passengers per year and approximately 67,000 aircraft movements. The fire department was able to secure a grant through Transport Canada last year that allowed it to prepare a request for proposal for a new 4×4 ARFF truck.

Jim DeGasparro, Sault Ste. Marie Airport operations manager and fire chief, says the specs the airport drew up for the new ARFF truck were generalized to reflect similarities with their two existing ARFF trucks. “We knew we wanted another 4×4 with a 1,600-gallon water tank, 225-gallon foam tank, and 500-pound dry chemical tank,” DeGasparro says. At that time, the airport had two E-ONE TITAN® 4×4 ARFF trucks, one a 2013 model and the other built in 1995.

“We are a regional size airport, so we are mandated to have two ARFF vehicles of that type in order to continue to operate at a certain level,” he notes. “Once we got our new ARFF truck, we planned on keeping the oldest E-ONE TITAN as a reserve unit, so that with three ARFF trucks, if one goes out of service, we could continue to operate as a Transport Canada Category 5 airport.”

DeGasparro points out that Sault Ste. Marie Airport is one of two regional size airports in Canada that operate under a private nonprofit organization. “In 1998, when the Canadian federal government divested itself of airports, some were taken over by cities, but the city of Sault Ste. Marie declined to do so, so a private entity corporation was formed to operate the airport.”

Sault Ste. Marie Airport got three companies to bid on building the new ARFF truck. E-ONE was the winning bidder at a purchase price of CDN $976,900, according to Derrick Dias, sales specialist for E-ONE. “We built them a TITAN 4×4 of the design we introduced in 2018,” Dias says. “The truck is powered by a Scania 670-horsepower (hp) Tier 4 diesel engine and a Twin Disc six-speed automatic transmission.”

2 The Sault Ste. Marie ARFF truck has five compartments on each side, with two of them being transverse.

The pump on the unit is a Hale 8FG rated at 3,000 gallons per minute (gpm) at 165 pounds per square inch (psi). The rig carries a 1,600-gallon water tank, a 225-gallon foam tank, 500 pounds of Purple K dry chemical, and an FRC AutoFoam SC electronically controlled foam proportioning system.

Dias notes that the new styling inside the cab including the truck’s windshield, which slopes forward and sits lower on the vehicle’s body, allows for greater visibility for the driver and other occupants than found in previous models of the rig. The Sault Ste. Marie TITAN 4×4 cockpit-style cab has seating for three firefighters, the driver in an air ride H.O. Bostrom seat, and the other two firefighters in H.O. Bostrom fixed self-contained-breathing-apparatus (SCBA) seats.

The airport’s new ARFF truck has an Akron Brass 3353 air-aspirated roof turret that can flow 375 gpm at low flow or 750 gpm at high flow and an Akron Brass 3352 model 300-gpm fixed-flow-rate bumper turret. DeGasparro notes that the other TITAN 4×4s owned by the airport have air-aspirated roof turrets, “so, we wanted it on the new TITAN too. Air aspiration makes more bubbles, which are puffier and makes the foam more effective as a blanket,” he adds.

5 Access to the top of the TITAN 4×4 is by a 56-inch-wide ladder that’s an integral part of the rig’s body with a fold-down section.

“A driver sitting in the airport’s new ARFF truck is able to control the pump, both turrets, handlines, the engine, and all lighting using a multiplexed system to control those functions through a programmable touch screen,” Dias says. The Sault Ste. Marie TITAN 4×4 also has a Harrison Stealth MCR 10-kW hydraulic generator and a Will-Burt 110-volt 5,400-watt Night Scan Powerlite LED light tower with six 900-watt LED light heads.

Maximum compartment space was another consideration that Sault Ste. Marie Airport had, Dias says. For example, the L1 compartment is designed to house hose, dry chemical, and electrical and air hose reels and also has a narrow transverse into the R1 compartment that can be used to hold a backboard, he says. The L2 compartment houses the pump, pump panel, inlets, discharges, and all pump plumbing.

The L3 compartment is a large, lower space with a slide-out that is mirrored in the officer’s side R3 compartment. Typically, preconnects are located in these compartments, Dias says. L4 is a full-height compartment with an upper section containing a full transverse to R4, while L5 and R5 are rear body compartments with roll-out, tilt-down trays.

Dias notes that E-ONE gave the Sault Ste. Marie TITAN 4×4 a winterization package that allows the fire department to use the truck in temperatures down to –40°F. “The main component of the winterization system is a Webasto diesel-fired circulating pump that produces 104,000 Btus of heat that circulates fluids around the vehicle to keep the pipes and equipment from freezing,” he says.

DeGasparro says that the department’s firefighters are pleased with the new TITAN 4×4. “They like the feature of having the light tower,” he says, “but especially the much greater visibility for the driver where he has a very wide field of vision. And, the acceleration on the vehicle is excellent; it’s very impressive.”