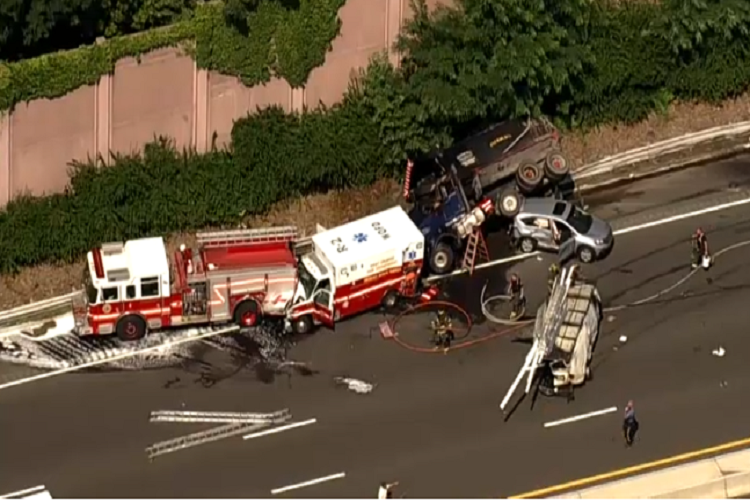 Although not “rural” in nature, the inspiration for this article is my reflection on the horrific traffic collision in New Jersey late last month. For those who may not be aware of the incident, while operating at the scene of a highway incident on State Highway 280, an ambulance, a fire engine, New Jersey State Trooper cars, and several motorists vehicles were wiped out by a speeding dump truck that piled into the emergency vehicles, sending members from each vehicle to the hospital. Two or more of the seven responders involved, sustained serious or life threatening injuries. It is unacceptable that in today’s high-tech world we can’t even seem to slow the number of incidents like this one. It seems that a day doesn’t go by that we don’t see or hear about our Brothers and Sisters getting whacked while working traffic related incidents. Keep your head on a swivel!

We have a joke here in the Rocky Mountains that we have five seasons: Winter, Spring, Summer, Fall, and Road Construction. Apparently this is no joke. While teaching in Alaska last Fall, they told me they only have Winter, Spring, Summer, and Road Construction. Speaking with a colleague from New Jersey this morning, he shared that he has NEVER seen so much road construction, nor has he ever seen so many fire-department-related challenges due to the road repairs. I always knew that road repair issues were a challenge in rural areas like ours in Idaho, Montana, Washington, and Oregon, but I must admit that I didn’t realize until now just how widespread across the country this issue really is.

Please know that as we go through this piece, I understand the need for road repaving and such, and I certainly don’t blame (and neither should you) the brave souls who do the work on the roads. That said, some of what we in the fire service have to deal with that occurs as a result of fewer lanes, escorted traffic, and wait times have nothing to do with the actual road construction itself.

As an example, our county has two major two-lane highways as the thoroughfares through the county. Our fire district has one two-lane highway through it from south to north, roughly 30 miles long, ending at the Montana border. Ninety percent of that stretch of Highway 93 is flanked on one side by steep mountainside, and on the other by one of two rivers. Our response times can be greatly affected due to both restricted access to the station for the volunteers, as well as apparatus delays caused by otherwise nonexistent traffic. The logistics of road construction here are tough on the contractor also. No place to stage, no place to turn bottom dumps around, having to truck paving material from a batch plant located 15+ miles away. The list goes on.

The common challenge that seems we all face during the 5th season deals with the results of the impatience of those caught in road construction delays. For example, road-rage-related incidents only seem to happen in this area during road construction times—everything from speed-related crashes, vehicles into the river, to rock and flying gravel blowing out windshields, and impatient drivers crashing into repaving equipment—make the challenges of getting a piece of fire apparatus from point A to point B even more of a challenge. Sound familiar? I can even share an incident where an overloaded gravel truck lost part of a load ON TO the vehicle that I was driving as it passed in the other direction.

So now that we’ve identified some of the problems that come with road construction, what might be some of the solutions? Hopefully obvious is the suggestion of preplanning. I hate to admit it, but in this part of the state, preplanning seems to be a different language that most are not interested in learning. Being proactive in this case has advantages (in my opinion) beyond measure. First and foremost, are there alternate routes throughout the fire district that can be used for responses during road construction times? Is there opportunity for meeting with City, County, or State Department of Transportation bosses to discuss the impact of construction vs emergency responses through the proposed construction zones? I’ve learned about and, as recently as yesterday, encountered temporary solar powered traffic control (signal) devices that are controlled by live camera feed. In other words, somewhere offsite is a live feed of the traffic control device, whereby the person monitoring the feed could change the signal to allow for emergency vehicles (understanding that they would have to clear all oncoming traffic before changing the signal). Perhaps ask if these types of signal devices are available and appropriate for the areas in your district impacted by construction? Another option would be to talk with your mutual aid partners that might have better access to a given area or areas within your response area than you do, during these times of road re-surfacing. To the extent that you can, preplan, preplan, preplan. Lives (including yours) hang in the balance.

I love where I live, and wouldn’t trade it for anything….but…..we have none of the aforementioned options available to us here. With road construction challenges in mind, think about this: under the best of circumstances, the closest available ambulance to the border of our fire district is 22 miles away. If we are on the northern aspect of the district, that same ambulance can be 40 miles away. Add road construction traffic into that equation.

Secondary traffic incidents involving emergency service personnel are NO joke. Keep your heads on a swivel, and (if you can) try to not turn your backs on oncoming traffic. At least get into the habit of looking to see where you might be able to bail out to in the event you see something bad coming your way. Highway-related responses require the ultimate in situational awareness.

Savvik to Give Away 10 Pairs of Boots as Part of...