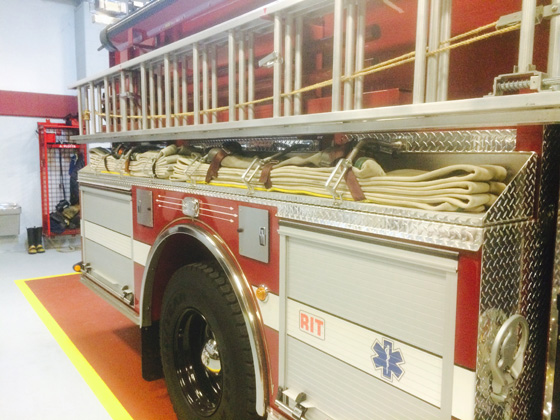 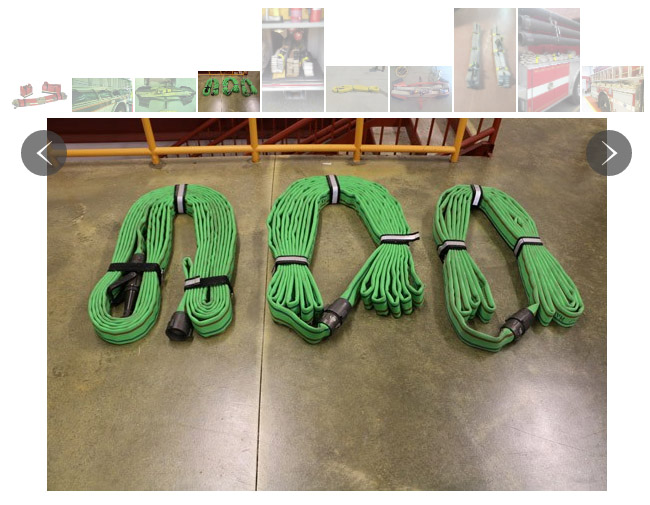 This month I’m going to focus more on fireground operations and look at one of the tools in the toolbox for engine company operations.

A “rack,” as defined in the Washington, D.C. metropolitan area, is a bundle of hose varying in size and length, normally used for high-rise firefighting. As company officers and firefighters started to think outside the box, they realized that using racks can assist with their work at not only high rises, but on the everyday fires as well.

First, lets look at a rack in its traditional configuration—a bundle of hose of varying diameter, which, depending on the department preferences, was folded or bundled with the use of seatbelt straps or a commercially available device. This was the hose used exclusively in high-rise fires and deployed in the stairwells and hallways. It was usually crammed in a compartment and not used very often unless the response area was heavily laden with high rises. Even in this case, realistically how many high-rise fires would we really go to? The length of the packs varied from 100 to 200 feet and was based on the engine companies’ preplanning of their buildings and the distance between apartments and the closest standpipe risers. The nozzles were usually combination nozzles until smooth bore nozzles became en vogue, and I won’t tackle the argument of smooth bore or fog in this article. (Photos 1 and 2)

In many departments, the high-rise packs, or racks, slowly started to evolve into a tool for engine company officers to use on not just the tall buildings, but also apartment fires and house fires. And, their use was just not limited to the urban fire departments. I would have to give the District of Columbia Fire and EMS (DC Fire and EMS) credit for starting the multiple uses of the racks and their spreading to the suburban and rural areas in the surrounding departments. The DC Fire and EMS rack is simply two racks of 100 feet of 1½-inch hose with a fog nozzle and slug smooth bore attached to a 2½-to-1½-inch coupling. Spanners and rope hose tools were also carried to facilitate attaching to the risers and assist with stretching. (Photo 3) DC Fire and EMS originally used racks for their high-rise fires. However, as company officers and firefighters honed their craft and worked the bulk of their time in row-house fires, they found that these racks were great tools for extending lines and making up additional lines when needed. 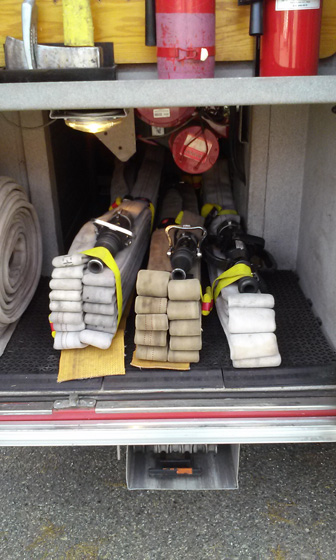 As this new tool emerged on D.C. firegrounds, suburban companies started to adopt the idea for use in their response areas. With the large, sprawling apartment complexes in the surrounding communities, departments identified a need for long lines. These companies normally had been using a 400-foot line and hoping for the best on length or coming up with a lot of extra hose at the door by not estimating the stretch correctly. By adopting the rack, they added choices and options to their stretches by being able to easily extend attack lines, make up lines, or replace lengths. The racks started to appear on more and more engine companies with many hose size and length variations,with a breakaway nozzle with fog or smooth bore tips. (Photo 4)

Another example of a suburban company using a rack is the Kentland (MD) Volunteer Fire Department, located outside Washington, D.C. It started using racks a number of years ago and has not looked back. The rack plays an important role in the day-to-day operations of this busy volunteer company, from running apartment fires to house fires. The department currently runs each engine out of the station with two 100-foot packs of 1½-inch hose with a breakaway nozzle attached. Each pack is in a custom-designed bag with a semirigid spine to assist in keeping the pack together and for ease of deployment. (Photo 5)

Racks have become such a staple in the Kentland operation that the department wrote specifications for a new engine to have storage space dedicated in a low location that was easily accessible for the officers and firefighters. (Photos 6 and 7) Part of the Kentland standard operating procedures for single-family dwelling fires is that the“rack is brought by the officer to the front of the house in case the line needs to be extended to the rear in the event of a basement fire or if a burst length is encountered in the firefight. Extending a line is practiced by the crews constantly and is a well-entrenched habit for them if the need arises.

The use of racks is not limited to urban or suburban companies by a far stretch. Rural companies are now starting to include them in their cadres of equipment and training for use in their areas. The Erskine Lakes (NJ) Volunteer Fire Department makes extensive use of racks for the area’s vast array of large homes, McMansions, and lake-front homes. (Photo 8) It adopted these to increase crew efficiency on the fireground and to always plan for the unexpected. Using in-house items such as backboard straps it configured the racks to fit its needs and modify the existing apparatus to store them. (Photo 9)

Rack usage has even spread to Florida, as Clearwater (FL) Fire & Rescue recently started using them. We decided on one pack of 100 feet of 1¾-inch hose with an Elkhart 75/175 combination nozzle. Our configuration is done in a coil-load fashion and bundled together with ringed straps. We use our racks for our courtyard line which is 3-inch hose with a gated wye attached. The officers and firefighters just connect the coil-load and at the wye and make the attack; the other companies bring their coil-load to also attach. This rack can also be used to extend lines and replace burst lengths as mentioned above. (Picture 10)

The rack has a place in every engine company’s list of equipment. With practice, this tool can deliver an enhanced experience as well as help ensure safer firegrounds.

RICKY RILEY is operations chief for the Clearwater (FL) Fire & Rescue and a member of the Kentland (MD) Volunteer Fire Department, where he served as chief of department. He also served for 20 years with the Fairfax County (VA) Fire & Rescue before his retirement in 2005.