There are many stories of rags to riches, per se, when it comes to the creation of volunteer fire companies around the United States. Some fire departments that have an abundance of new fire apparatus today may have struggled to operate during their early years.

This was the case with Roslyn Rescue Hook & Ladder Co. #1. The company was created in 1852, but its first charter to operate was not granted until 1866. During that time, hooks and ladders were procured as well as a carriage to transport the equipment.

The equipment was primitive to say the least. An inventory of the company property in 1875 shows that it consisted mainly of buckets, ladders, hooks, and chains. In 1888, a horse-drawn hook and ladder was obtained. In 1903, a Silsby Steamer was put into service that carried a hand pump slung underneath the frame.

Fast forward to the present-day fire company. According to Eric Lippe, ex chief and member of the apparatus replacement committee, “We had several vehicles we wanted to replace. They were getting up in years, so we felt that if we went by a 12- to 15-year replacement program, we could get more money for resale. We started the process to replace one of our engines and a quint about six years ago. The one engine was a 1992 model; and the 2002 75-foot quint was about 14 years old two years ago. We also wanted to do away with the quint concept, as it was not working for us.”

“Our one engine and the quint were Pierce products, and we wanted to keep our fleet standardized for maintenance, training, and overall operation. Since we are an independent fire company, we could choose the make and model of apparatus without any problem. However, we still looked at several manufacturers. For the engines, we went with Pierce Impel Pumpers with 1,750-gallon-per-minute (gpm) pumps and 750-gallon tanks. We went with two-stage pumps, giving us better pumping options,” Lippe adds.

The department sold the one older engine and the two quints, resulting in additional money to work with for the three new purchases. “We took delivery of the two new engines several years ago but had to wait for the ladder purchase since we had to rebuild our older fire station to accommodate the new ladder,” Lippe explains. “Around the time we were working on designing a new ladder, we decided to go with a midmount tower. The new Pierce Ascendant was unveiled at FDIC International. We saw online photos and Firematic, the local Pierce dealer, brought a demo to our firehouse. Our committee liked what we saw. We never had a tower ladder before, so this was a big change for us. The Ascendant has a shorter wheelbase than most other midmounts; has a great, small outrigger reach; and is self-leveling. We thought working out of the basket was safer for our firefighters, and the apparatus has a full walkable ladder if we need it.”

Lippe continues, “The engines had more room in the cab, and we went with a top-mount design because our members were used to them and we also feel it’s safer for operating with them while on the main highways. We also like having the 750 gallons of water on hand because of manpower issues during the day. 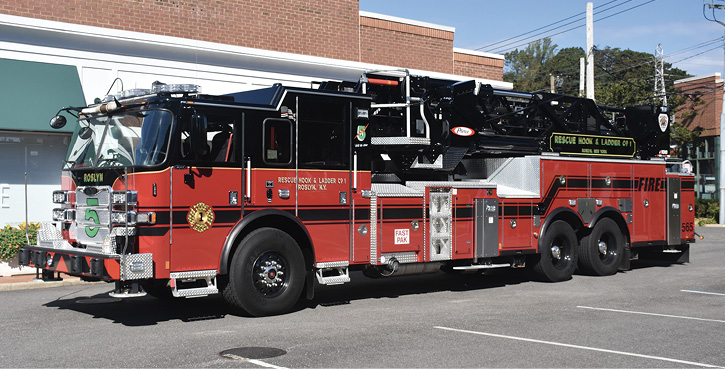 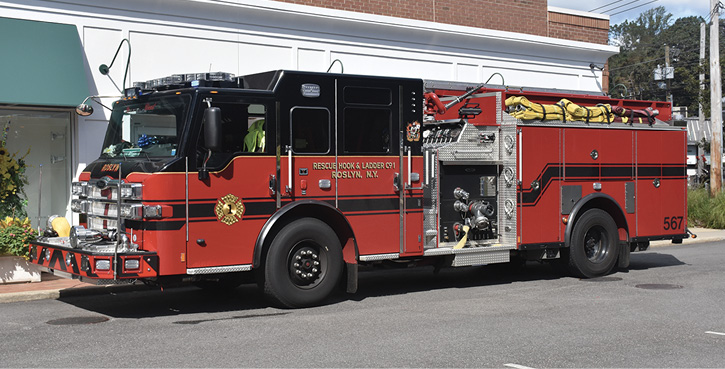 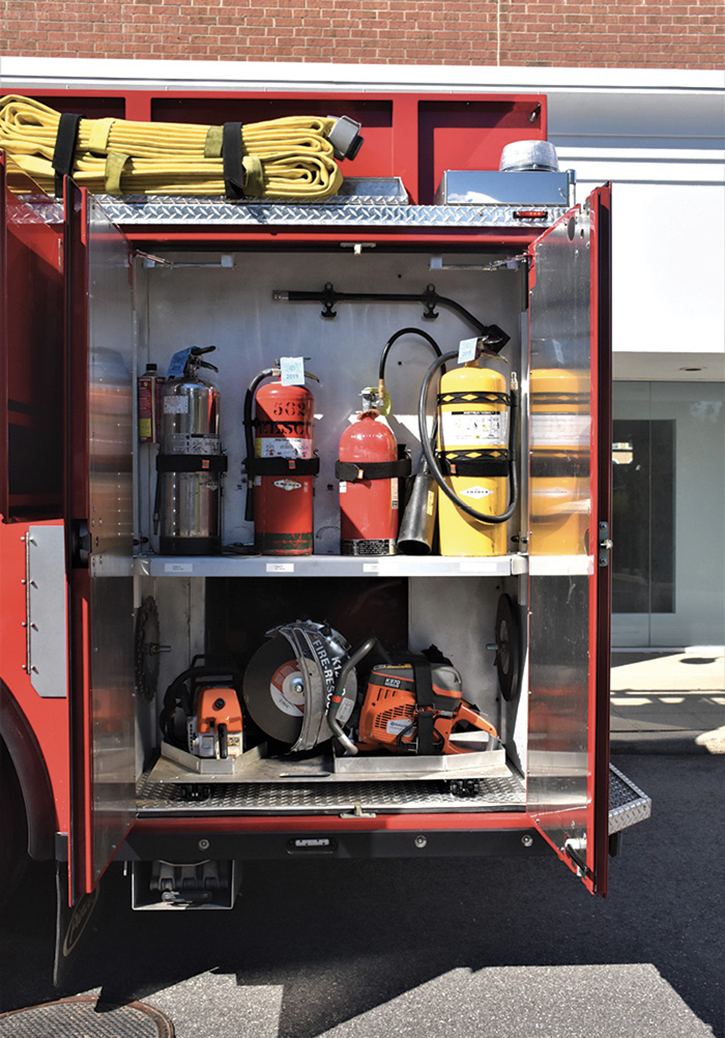 4 The ladder compartment with saws, a portable generator, and extinguishers. 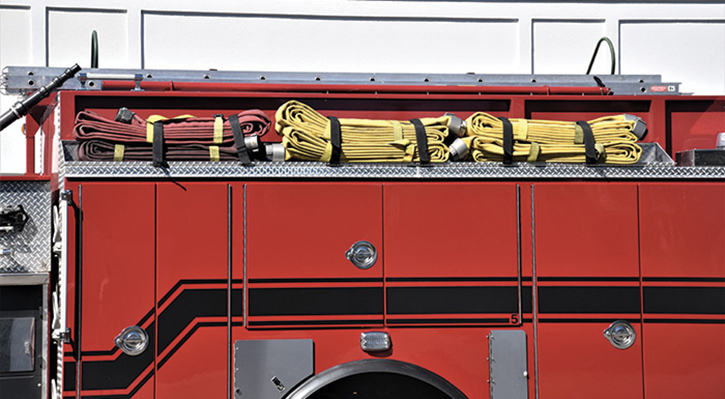 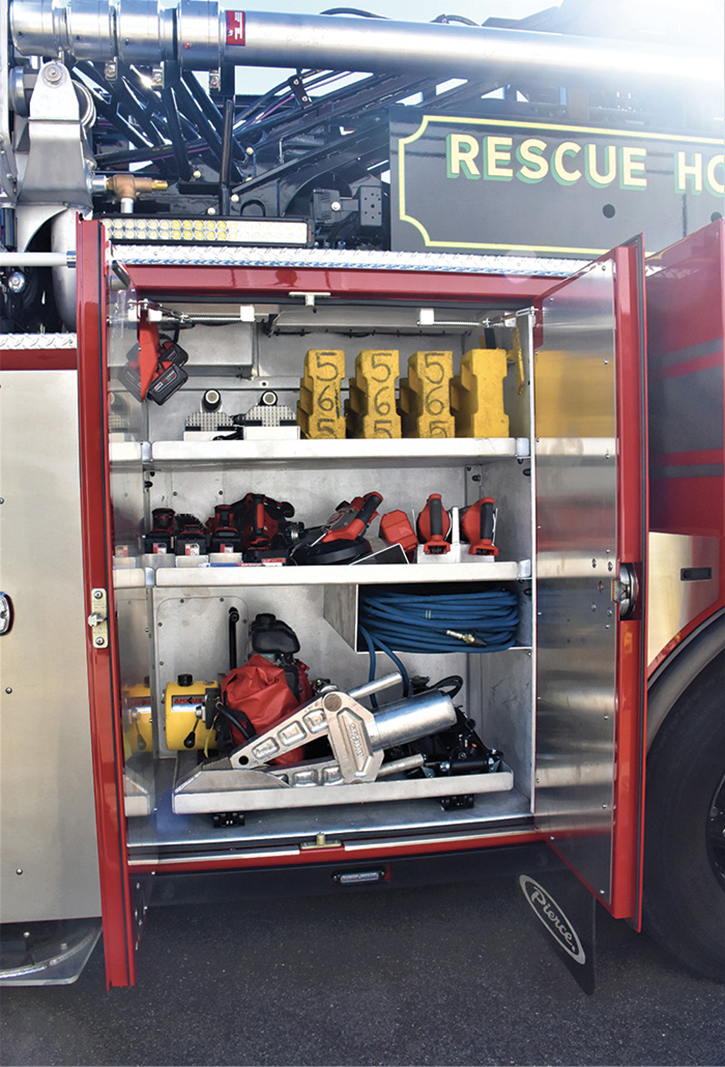 6 The ladder carries an Amkus rescue tool and related equipment.

“Our local Pierce dealer, Firematic, and its salesman Ray Muller were great to deal with. Ray has a mechanical background, which helped a lot when designing the specs. Unfortunately, when the build was taking place for the ladder, our committee was unable to visit the factory because of the pandemic, so we had to rely on weekly photos. All in all, the build went well,” Lippe concluded.

The fire company replaced one older pumper and quint and went with a new ladder design for its response district. Members planned accordingly and worked with their local dealer as well as the manufacturer (Pierce) to get what they wanted. They thought outside the box, selling their older apparatus and getting some money on the resale that could be applied to their new purchase. Their proactive way of thinking and also planning for the future provided them with three new pieces of apparatus that will serve their community well into the future.