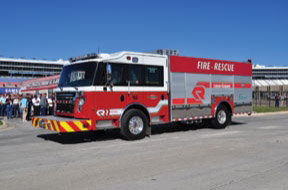 WYOMING, MN—Rosenbauer has received its 500th order for its Commander chassis. The order comes from the Greenwood Volunteer Fire Company in Sussex County, Delaware. The sale of the 500th Commander marks a significant milestone in the company’s history and more importantly, the milestone was achieved in the same year that the Commander custom fire apparatus chassis was introduced to the fire service.

“Rosenbauer is proud to partner with the Greenwood Volunteer Fire Company on its new Rosenbauer 109-foot Viper EXT aerial. Not only will this aerial ladder be the department’s first Commander, it will also be the department’s first Rosenbauer, and we truly value the confidence that Greenwood has placed in Rosenbauer and our dealer, DPC Emergency Equipment,” said Harold Boer, President of Rosenbauer America. “We are very pleased with the success that we’ve seen in the Commander; even more impressive is how quickly this success has been achieved.  In just over a year’s time we have received over 500 orders for the Commander chassis. This shows the trust those fire departments throughout the world place in the quality, dependability, and service of Rosenbauer helping to further establish that we are the worldwide leader in fire apparatus.”

The 109-foot Viper EXT rear-mount aerial for Greenwood will be built on an R600 Commander chassis with a Cummins ISX12 500 HP engine. The R600 Commander cab will include seating for six fire firefighters, a low engine tunnel, and a flat floor in the crew area for increased room, safety, and comfort. It will have Rosenbauer EXT 3/16-inch extruded aluminum body which carries a lifetime transferable warranty and the patent-pending Rosenbauer Green Star Idle Reduction Technology.

The 109-foot aerial ladder will undergo Rosenbauer’s hot dip galvanizing process and then be painted black for corrosion protection. The aerial will be equipped with Rosenbauer’s exclusive SMART Aerial Controls System providing the smoothest operating aerial device in the industry. Limited operation when in a short-jacked outrigger scenario, automatic stowing of the aerial and cab and body collision protection are all exclusive features of the Rosenbauer SMART Aerial Control System that will be included on Greenwood’s new apparatus.

Located in northwestern Sussex County, the Greenwood Volunteer Fire Company was founded in 1923. Greenwood’s first piece of apparatus, a Hale 250-gallon pumping truck, was purchased in 1925 at the cost of $2,875. The department’s response area encompasses roughly 60 square miles, yielding approximately 200 fire calls and 700 EMS calls annually. Greenwood’s apparatus fleet was painted red until the early 1970s when the decision was made to change the color over to green.