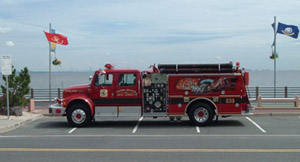 Featured in the 12-12-12 Concert for Sandy Relief, Union Beach (NJ) Chief Rob LaBerta says, “We have four fire stations and over sixty firefighters in Union Beach. Three of the four fire stations were completely flooded and they require reconstruction both inside and out. Furthermore, of the 6,800 Union Beach residents, over 3,300 were displaced as a result of the storm, and many of them still have not found permanent housing.”

This is not the first time Dirty Harry’s has tackled a community-wide detailing project on a pro bono basis; in fact, community projects are part of Dirty Harry’s business plan. Last summer, Sandwith and his son Joseph, an active duty Jersey City police officer, corralled a team of high-end detailers including Doyle and Wiener to help him recondition four historic fire trucks for future exhibition in the upcoming New Jersey Fire Engine & Equipment Museum at Allaire State Park. “Rather than charging a nonprofit organization for the work, whatever money I would have made charging for the project will come back to me two or threefold in referrals,” he says. ”It is more important to invest in community and customer loyalty through philanthropic endeavors.”

For more information about Harry Sandwith, his Dirty Harry’s Detailing, and more details about the Union Beach project, call 732-687-2391.