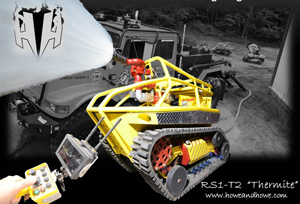 WATERBORO, ME – Howe and Howe Technologies, in conjunction with the Portland Jetport Fire Department, has announced that they will conduct an “Airport Disaster Response Simulation” using a comprehensive robotic firefighting system at the Portland Jetport on September 15.  Howe and Howe recently released news of the production on the Bulldog RS1 and the RS1-T2 “Thermite” robotic response platform.

Designed from the ground up to keep firefighters and first responders clear from harm, the Bulldog RS1 and the RS1-T2 Thermite robot are capable of nearing a blaze and delivering their payload, either water or fire-foam, from up to a quarter mile away. Built on a robust platform and drawing on years of extreme vehicle research, the company has applied all of their knowledge to creating a durable, robust delivery system and robot capable of handling incredibly rugged terrain. The robot itself is built on a modular base capable of handling a number of configurations that the user may need including a revolutionary hydraulic arm, visual or sensor reconnaissance, or a mini-plow with minimal effort and a greatly reduced cost base.