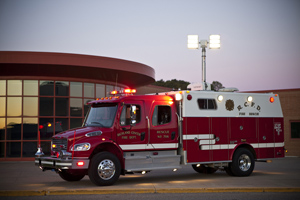 The decision to replace apparatus isn’t made lightly in fire departments around the country, and for the Richland Center (WI) Fire Department, the choice recently came down to either purchasing new fire apparatus or refurbishing existing apparatus.

Squad 706 is Richland Center’s primary rescue vehicle, built by Marion Body Works in 1986 with an all-aluminum body, and the vehicle’s chassis was showing signs of needing replacement. So, the department weighed the pros and cons of purchasing a new rescue or refurbishing the existing squad.

“We have a long-range plan for replacement of vehicles in our fleet,” says Richland Center’s Lieutenant Steve Krueger. “That rescue was the highest service vehicle in our fleet and the one that showed the most wear. After considering the options available to us, we decided to buy a new chassis for it.”

Krueger says the department worked with the people at Marion on the specifications needed to replace the chassis and tie the existing rescue body to it, went out to bid, and awarded the chassis contract to River State Truck, in La CrosseWI.

The refurbishment then became a combination of back and forth between Richland Center and the Marion Body Works facility in Marion, WI.

“We drove the chassis from La Crosse to our station where we installed the warning light bar and our two-way radio in it,” Krueger says. “Then we took it to Marion, where they installed a 25-kW Onan PTO-driven generator.”

The next stop was back to Richland Center where firefighters took the vehicle to the town highway shop so the original 1986 rescue truck body could be fitted to the new 2010 chassis. Once that was completed, firefighters took the rescue back to Marion where Marion mechanics installed a Will-Burt 9,000-watt light tower, a front bumper extension, and finished the wiring for the generator into the vehicle’s breaker box.

The last stop was back at Richland Center Fire Department, where firefighters changed the graphics on the vehicle, added a Kussmaul battery conditioner, and installed Onspot automatic tire chains.

“We have some pretty handy guys in our fire department,” Krueger says. “There are plumbers, electricians, carpenters, and people from all walks of life who are very talented.”

The Richfield Center (WI) Fire Department is staffed by 45 paid on-call firefighters, protecting 310 square miles and a population of approximately 11,500 people. Within its response area are 15 educational facilities, 13 government buildings, a four-story hospital-clinic complex, a University of Wisconsin two-year campus, and a dozen buildings housing apartments occupied primarily by elderly and disabled residents.

“This past summer we put a new 1,800-gallon UPF Poly tank on tanker 704, originally built by Marion for another department in 1982,” he says. “We purchased the tank and body in 1990, found a chassis and put the two together. Five years later we bought a new chassis, and remounted the steel tank and aluminum compartmentation. When the tank showed signs of wear, we replaced it with the UPF Poly tank.”

Krueger says his department is sold on the value and quality of refurbishing older equipment.

“We got a lot of front-line equipment in the last decade through new purchase and also through refurbishment,” Krueger says. “The rechassis job on our rescue squad worked out well for us and was one third of the cost of a new vehicle.”