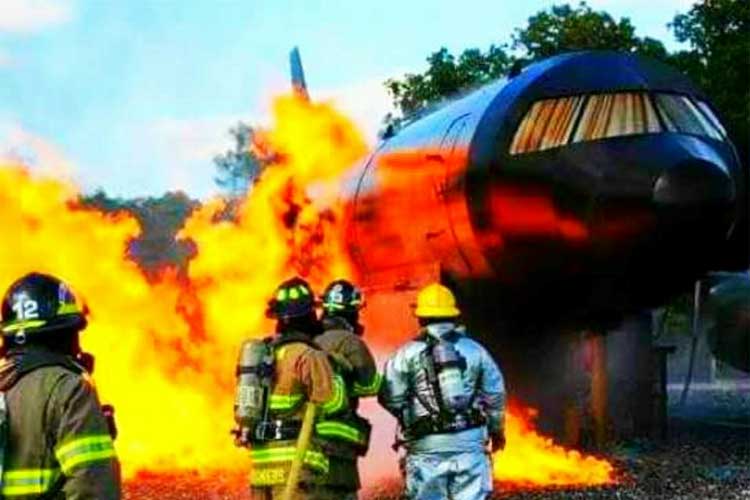 Commercial air travel is as safe as it has ever been, and the chances of an event are as low as has been recorded. Yet, airports must remain prepared to respond if an emergency or, even worse, a crash of a passenger plane occurs.

For those surrounding an airport, there should be appropriate preparation; even those in designated flight paths must be prepared. These are classic examples of high-risk/low-frequency events (with a note to Gordon Graham, national consultant and speaker, on his constant teachings on preparation for these types of incidents).

If your organization protects areas remote from major airports, or even some mid-size facilities, the chances of something occurring are almost nil. If they do, the results are never good, as any crash would most likely cause total devastation. But, there remains more of a chance of smaller aircraft, either fixed-wing or rotary, crashing almost anywhere. These are not everyday events but still require regular reviews of response policies, in case the unthinkable happens.

If you have aircraft flying at relatively lower altitudes in your response district, there is a chance that a negative event could occur—most likely involving a small private plane. There is also a chance a rotary aircraft could crash. Based on my reading about some of these incidents, it seems pilot error and weather are most likely contributing factors. As a response agency, there is not much that you can do about the pilot’s capabilities. But, if you are in an area with the potential for severe weather, then another risk factor exists. This is all part of an assessment that you would do to determine the chances of a rare event happening and the preparation for it.

I have responded to a couple of aircraft crashes. One occurred two houses down from my home. It was a single-engine, single-occupant private plane. The pilot was from the area and was flying too low when he lost control and crashed into a garage. I don’t recall the official cause established by the National Transportation Safety Board or the Federal Aviation Administration. As I was home at the time, I was the first on the scene. The pilot was obviously dead. There was no fire, just a mangled plane with a deceased occupant. The action was to secure the scene and make the appropriate contacts to the agencies with jurisdiction.

For training purposes, personnel need to know who to contact based on initial size-up. Once notifications are made, then the fire service’s role is minimal. Depending on the resources in your area, you may be asked to help with scene security.

I also responded to a helicopter crash. In this case, the outcome was much better. In some respects, it was a “controlled” crash. As such, the injuries were relatively minor, but the aircraft was damaged. In both responses, there was no fire. The actions needed here were to secure the scene, make it safe for entry (proper size-up), treatment, and transport. Simultaneously, the appropriate authorities were contacted.

Knowing the hazards and risks are important and need to be included in any reviews during training. The principles of safe operations and risk assessment for structure fires can apply here. Risk a lot to save a lot, take reasonable risks when appropriate, and risk nothing when all is lost. Understanding what you can and can’t change regarding the outcome is very important.

Since these are very unique events for most departments, there is a natural curiosity, and this can put people in a position where they should not be—taking unnecessary risk. It is important to take the time to think about the appropriate actions. Depending on the duration of fire department involvement, you might need to assign a safety officer.

As rare events, crashes are newsworthy. You can expect a great deal of media coverage. Most of it will be traditional, but you may also find potential risks such as news organizations using helicopters to get closer to the scene. Depending on your proximity to big media markets, there can be multiple aircraft in the area. It is not your job to control or restrict them, but they can create challenges with noise and attract bystanders. This can be different than most media contacts, so you just need to be aware of what can happen. You also may not have as much expertise in this area, so you will be limited in the types of information that you can provide. Plan ahead whenever possible.

Unless you are an airport firefighter with aircraft rescue firefighting training (or your hobby is such that you have taken a special interest), your knowledge of aircraft is minimal. If you are close enough to an airport, take the time to introduce yourself and meet the folks who have more expertise in all aspects of aircraft response and rescue operations. If they are required as part of an airport (some smaller airports are not required to have a staffed presence), they are mandated to have necessary training and continual education. They know their stuff and are willing to share what they know. You will not become an expert but can gain enough knowledge to get you started. You will also need to do this more than once, depending on your risks and time commitment. It is easy to forget what you are told, so refresher meetings are helpful.

Fortunately, incidents involving aircraft are rare. I would venture to guess that almost all firefighters will go through their careers without having to respond to this type of emergency. This doesn’t absolve firefighters from having some basic knowledge, just in case. Airports of any size have firefighters specially trained and are continually improving on their ability to respond to aircraft crashes and other emergencies. Most municipal departments do not have this same priority. But, there remains a basic need to have some minimal knowledge should the unfortunate and rare event happen.

Include timely reviews in regular training schedules. There is a tendency to place certain types of emergencies on the back burner because of their low chances of occurring. Some cannot be ignored or neglected. Consider the possibilities, and make sure personnel have the basics to begin the operation.