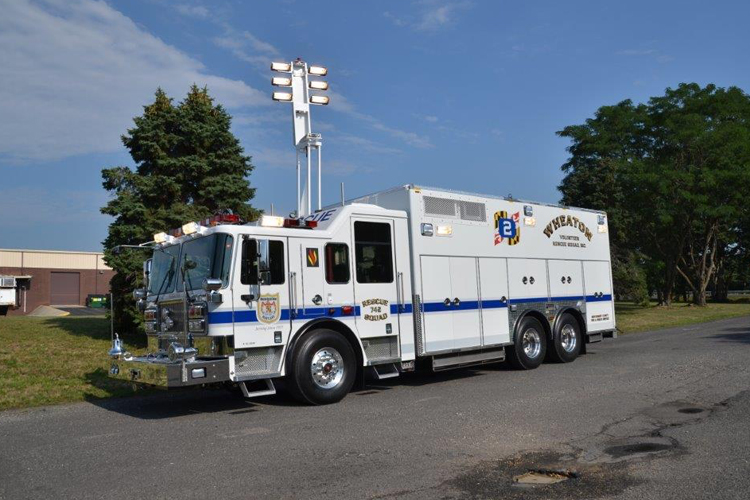 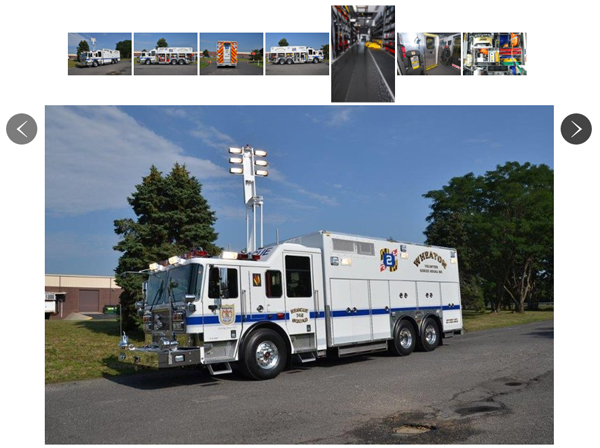 CLICK ABOVE FOR A GALLERY OF THIS HEAVY RESCUE >>

Wheaton (MD) wanted to replace its traditional walk-in rescue truck and turned to what Wheaton’s chief calls a “hybrid” vehicle, built by Rescue 1. “This rescue is a hybrid for us because it has a crew cab setup with a walk-through body from the crew cab as well as access to the interior through a door at the back of the vehicle,” says Mark Dempsey, Wheaton’s chief. “We wanted a method of storing equipment in a quicker-to-get-to way and safer method than having to go on top of the vehicle.”

“Four of us on the truck committee were engineers, so we were able to come up with a good preliminary design of the heavy rescue truck we wanted,” he says. “Rescue 1 was very good at taking that design and working with us to refine it to reflect what we wanted.” Dempsey notes that the rescue carries a lot of electrical power. “We have two 30-kW hydraulic generators because the rescue is designed to have redundancy,” he says. “We can switch from one electric panel to another and have the ability to deliver power off the truck if it is needed.”

Mike Marquis, vice president of national sales for Rescue 1, says, “There’s no wasted space, no empty areas, anywhere on this truck. The chief and his committee designed this truck well and knew exactly where each piece of equipment would be located.”

Marquis says the heavy rescue is on a Seagrave Marauder chassis that has a 229-inch wheelbase, with a 141-inch 304L stainless steel cab, a 10-inch raised roof, an overall length of 37 feet, and overall height of 11 feet 4 inches. The truck is powered by a Cummins 500- hp ISX12 diesel engine and an Allison 4000 EVS automatic transmission with a Telma retarder, a three-stage Jake brake, and a Vogel lube system. The cab has seating for six firefighters, Marquis notes: the driver, officer, two rear-facing and two forward-facing seats.

“The body is a big walk-in closet for the department because it wanted to keep firefighters off the roof of the truck,” Marquis points out. “The department bought all new equipment to go on the truck, and we had it early so we could do measuring and design work with the equipment in hand prior to mounting. It took us about four weeks alone to mount all the equipment.”

“The non-fixed equipment cost $450,000,” Dempsey points out. “We wanted the design of this rescue to make it available for any emergency that was presented to us. The cost of the rescue without equipment was $1.1 million.” He adds that Wheaton’s heavy rescue is one of six heavy rescue squads in the county, where two heavy rescues respond to every working fire, one on a first alarm and the second as a RIT.