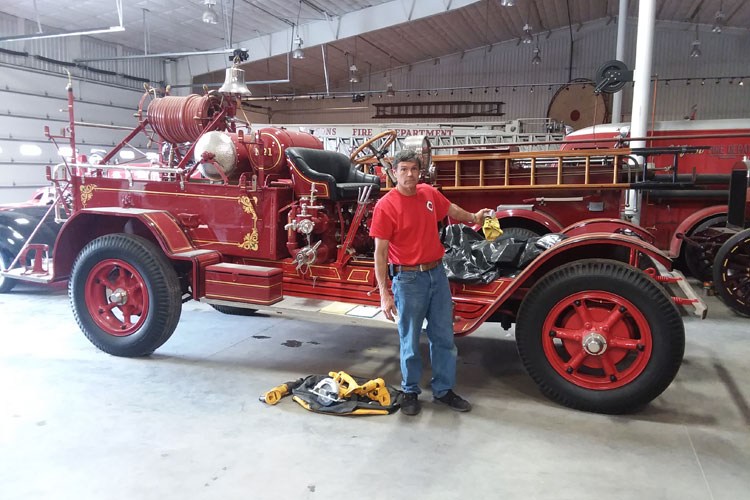 Estes Park, Colorado, is the gateway to Rocky Mountain National Park. That area is one of the most beautiful places to visit in North America. Estes Park has been a favorite vacation spot for our family for several decades. We never tire of revisiting the treasures that Estes Park provides. Since 2003, our visits to Estes Park include a bonus for this old fire apparatus buff. The Reliance Fire Museum at 460 Elm Road is home to the fire apparatus collection of Doug Klink. The museum was founded in 1994 in Kansas City, Missouri. The 501c3 not for profit museum had grown nicely in the Kansas City area where Doug could show his collection and at the same time offer rental storage space to other fire apparatus collectors to help fund the museum. In 2002, Doug and his wife Cheryl headed west to Colorado where they could enjoy the beauty and clean air of the Rockies.

Today Doug’s collection of vintage fire apparatus includes 12 rigs representing the horse-drawn era, early motorized, and even up to the 1960s with a Pitman snorkel. Several of the rigs have undergone a complete restoration, while other pieces are in more original condition but worked on enough to be functional. A visit to the museum at first sight might lead you to think that this is where old fire trucks come to die as two shells of fire pumpers are parked nearby. The exact opposite is true. Over the years, Doug has done approximately 25 full restorations and has done partial restoration or maintenance on an additional 25 units. Doug has often done the restoration work by himself. There have been other projects where Doug has been able to have a crew of workers to assist on a big job. The average full restoration time on an apparatus is two years.

So how does an electrical engineer that spent several years in the railroad locomotive and railroad industry get into directing a fire apparatus museum and offering a fire truck restoration service? Doug recalls his growing up in Whitefish Bay, Wisconsin. He lived right across the street from the Whitefish Bay Fire Department. Some of his free time was spent visiting the fire station and being around a fleet of three Seagrave fire trucks. Later, while Doug was in college, he also served as a volunteer. While he would move along to the railroad career, he also learned in 1989 that Whitefish Bay was selling a 1956 Seagrave 70th anniversary series pumper by sealed bid. The high and only bidder was Doug Klink for $1,500.00—and the rest is history. Over the years there would be more apparatus purchases. By 1994, Doug opened his museum in Kansas City, operating out of two buildings.

Fast forward to today. You can find the Reliance Fire Museum at 460 Elm Road, southwest of downtown Estes Park. There are not set hours of operation, so it is best to contact Doug via email at dougklink@gmail.com. There are times when Doug will head back to the Midwest—often with one of his restored fire trucks to take part in a SPAAMFAA event or even bring a vintage rig back to the city it served for a special occasion. This June was my third trip back to Colorado since Doug moved west. It is always good to catch up with Doug and get reacquainted with his collection. Here is a quick list. You can also check out his collection at Reliancefiremuseum.org or also try Facebook using the same name.

Here is a list of apparatus to be seen at the Reliance Fire Museum:

Doug is very proud that all the apparatus on display is operational. That includes the 1901 steamer right up to the 1967 Snorkel. The Snorkel was pressed into service during a large fire in the business district of Estes Park in 2009.

Each one of these rigs has a story to tell, and Doug has the details. There is more to the story. As I looked around the museum building I spotted a 1925 American LaFrance pumper that belongs to Loveland, Colorado. Doug had previously completed the gold leaf and striping on a fire-department-led restoration a few years ago. Now the rig was back for work on the engine. This unit should be ready to return to Loveland in a few weeks. 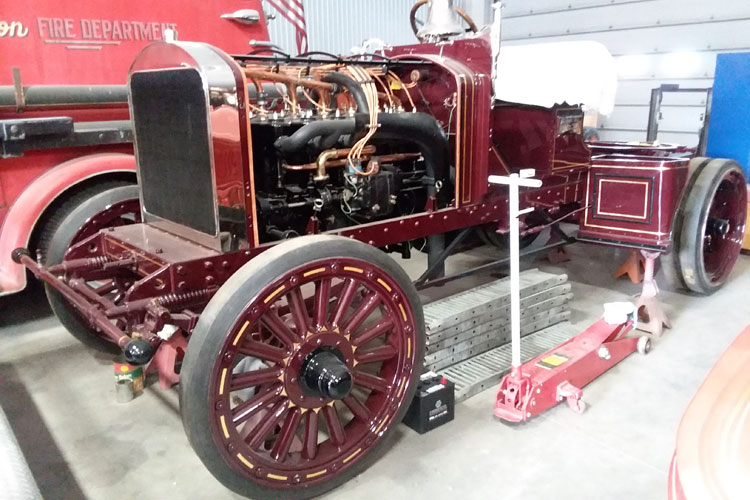 Next to the Loveland American LaFrance was a hard rubber-tired tractor already painted in a rich maroon color. It turns out that Doug has been working on a complete restoration of a 1914 Ahrens-Fox Model F tractor, job number 554. The Herschell-Spillman 66-horsepower 6-cylinder T-head motor has been completely rebuilt. It is easy to see Doug’s electrical engineering training come through on the beautiful wiring now in place on the 104-year old tractor. This unit will be matched up with a 1912 Seagrave 85-foot spring hoist wooden ladder to recreate an important piece of the history of the Sacramento (CA) Fire Department. There is a copy of an old black and white photo attached to the tractor that shows the rig when it was on the job. This tractor-drawn-aerial has a long history. Retired by the fire department in 1941, the aerial went to the Sacramento street department where it was used to change street light bulbs. The aerial would later surface as a part of the Harrah’s Hotel and Casino as a part of a collection that contained 1,400 vehicles. That collection was downsized when Holiday Inn acquired the hotel and casino and the Ahrens-Fox/Seagrave did not make the cut. For the next several years, the truck was parked out at a ranch and allowed to deteriorate. The good news is that after nearly two years Doug has the tractor nearing completion. Next up will a project to provide a period-appropriate 85-foot Seagrave wooden ladder. The completed project should be ready to return to Sacramento by the end of 2019.

The combination of the rolling stock vintage pieces of fire apparatus plus the restoration work in progress is what makes a stop at the Reliance Fire Museum in Estes Park unique. Is the museum one of the town’s best kept secrets? I don’t think so. Consider a trip to the beauty of Colorado in Estes Park and double the pleasure with a visit to the Reliance Fire Museum.