The Reisterstown Volunteer Fire Company was running a heavy rescue truck built on a 1992 Peterbilt commercial chassis and two-door cab with a 21-foot box and a side entrance door to a walk-in body.

Although the rig was still functionally solid, its high maintenance costs were taking a toll on the fire company, so members decided to spec a new heavy technical rescue.

Chief Craig Hewitt says the fire company had a number of concerns that it wanted addressed in a new heavy technical rescue. “There is a shortage of truck companies in our area, and we have many three-story garden apartments and some rather large single-family homes, so we needed to carry a lot of ground ladders,” Hewitt says. “We also wanted a front bumper set up for hydraulic rescue tool work; a self-contained compressed air foam system (CAFS) unit on the truck; and slide-out and transverse compartments to hold our rescue tools, struts, collapse gear, air bags, air-operated hand tools, water rescue equipment, and confined space and rope rescue equipment. And, we wanted all that on a Seagrave chassis and cab, because we have had good experiences with Seagrave chassis.”

Ron Willett, sales consultant at DPC Emergency Equipment, who sold the heavy rescue truck to Reisterstown, says it was a first-time customer for DPC, and after the fire company checked out some of Rescue 1’s trucks, the truck committee decided to go with a Rescue 1 heavy technical rescue. “The truck Rescue 1 built for Reisterstown is on a Seagrave Marauder II chassis and cab with seating for six firefighters, five in H.O. Bostrom self-contained breathing apparatus (SCBA) seats,” Willett points out. 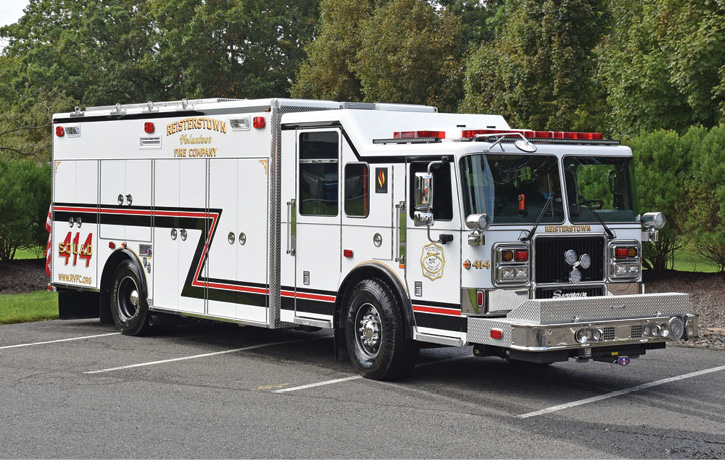 1 The heavy technical rescue is built on a Seagrave Marauder II chassis and cab, powered by a Cummins X12 engine and an Allison 4000 EVS six-speed automatic transmission. (Photos courtesy of Rescue 1.)

Service area: The department provides fire protection, technical rescue, and emergency medical services to the five-square-mile town of Reisterstown, 22 miles northeast of Baltimore, a suburban community made up of single-family homes and townhouses, a large number of garden apartments, commercial, and light manufacturing facilities.

Chad Newsome, national sales manager for Rescue 1, says, “The rescue has a 100-inch-wide, 20-foot-long aluminum body and is powered by a Cummins 500-horsepower (hp) X12 diesel engine and an Allison 4000 EVS six-speed automatic transmission. Wheelbase on the rig is 222 inches, overall length is 35 feet 8 inches, and overall height is 10 feet 7 inches. This rescue has custom rigging points on the body, so in addition to our standard four corner rigging anchors, this truck has four more on the officer’s side and three additional on the driver’s side.” 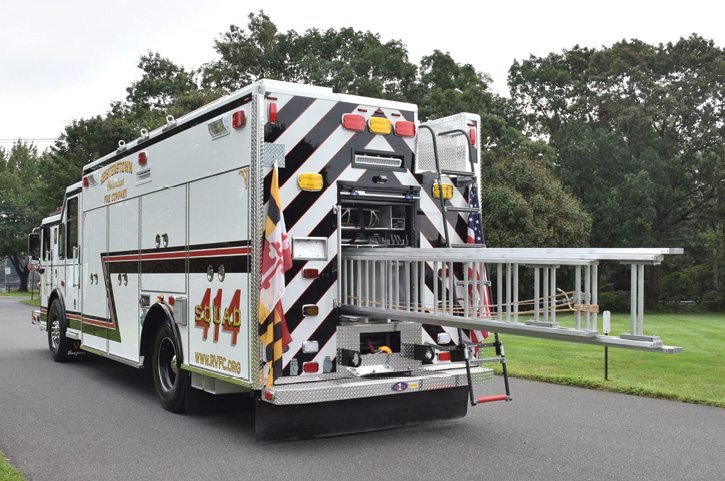 2 Because of a shortage of truck companies in the area, Reisterstown had Rescue 1 include a truck company complement of ground ladders in an enclosed compartment accessed from the rear of the vehicle. 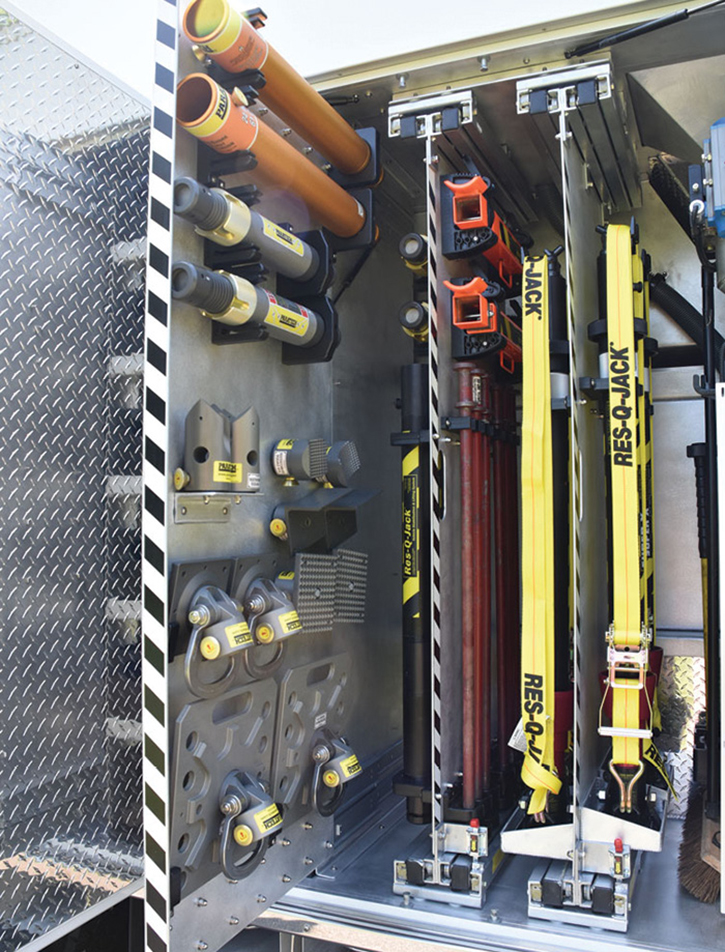 3 The rig carries Paratech Gold and Gray struts, Res-Q-Jacks, and interchangeable attachments and extensions on slide-out boards in the L4 compartment. 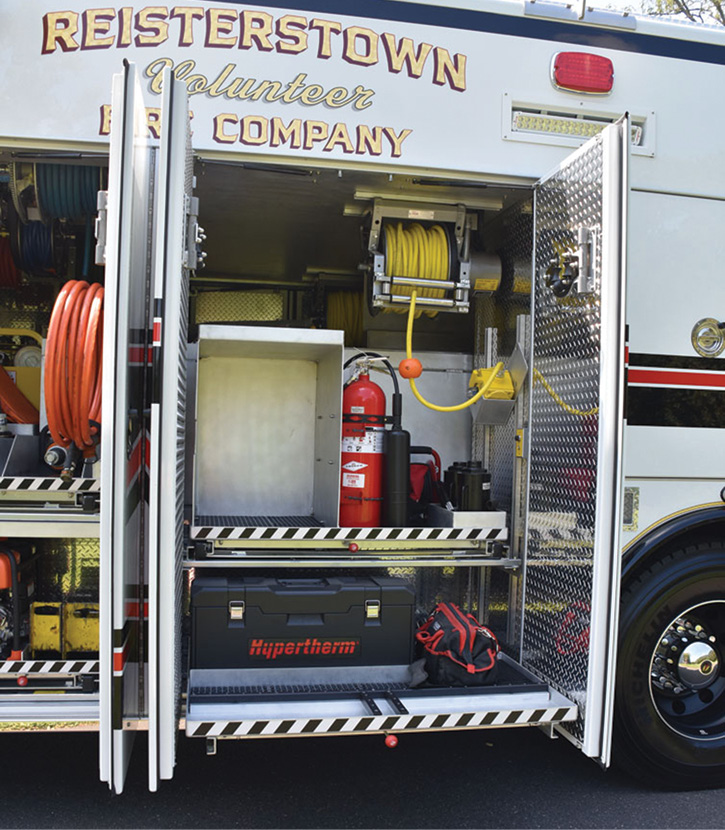 Willett notes that because the fire company wanted a truck company complement of ground ladders on the rescue, Rescue 1 packaged them in a compartment accessed from the rear. He says the compartment holds one 35-foot, three-section extension ladder; two 24-foot, two-section extension ladders; and two 16-foot roof ladders. A storage area above them holds a Stokes basket, a backboard, four pike poles, a Little Giant ladder, two eight-foot-long Paratech struts, and a Paratech monopod kit. Below the ladders is a compartment holding a Ramsey 30,000-pound hydraulic winch and a Warn 9,000-pound portable winch. Winch receivers are on each side and the front and rear of the rescue, which also are usable to mount a monopod for rescue work or as rope tie-off points. 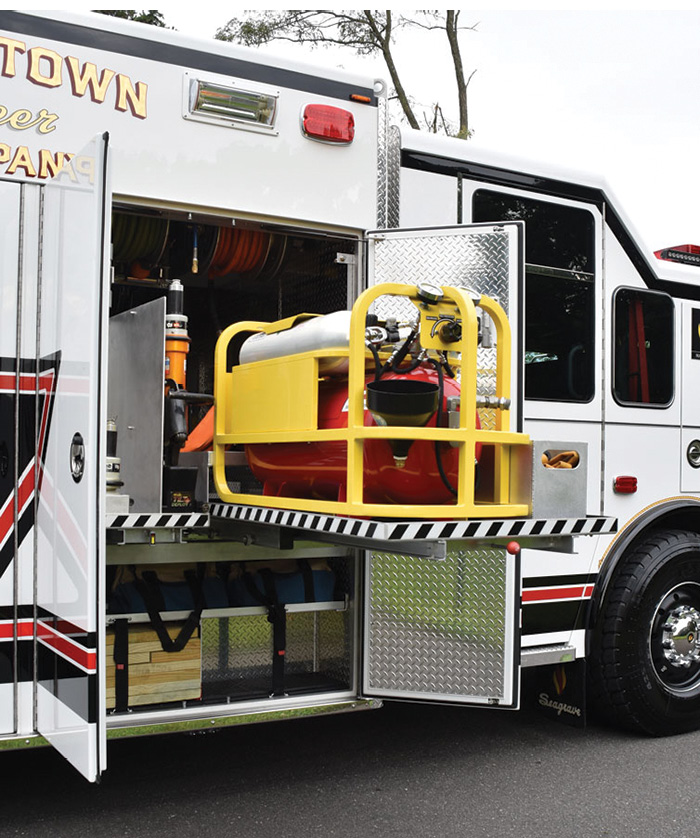 5 The L1/R1 transverse compartment holds a TRI-MAX 30 CAFS on a slide-out tray on the right side.

The L3 compartment over the wheel well is filled with cribbing and chocks, Hewitt notes, while the L4 compartment holds Paratech Gold and Paratech Gray struts and rigging equipment, Res-Q-Jack Super X lifting jacks for lifting or stabilization, attachments that are interchangeable between the Paratech struts and Res-Q-Jacks, extensions to use with either system for collapse and trench rescue situations, and a large assortment of straps and chains for rigging equipment and winches—with everything color-coded as to low- and high-capacity weight ratings.

Lighting on the heavy technical rescue, says Newsome, includes a Will-Burt 9,000-watt Night Scan light tower, Whelen LED warning lighting, a RotoRay and two Mars lights on the front grille, and 12-volt HiViz FireTech LED scene lighting with one bar on each side and a 72-inch-wide bar across the front of the cab and the rear of the rig.